The show got picked up as a permanent production and opened officially with this Midseason Premier: 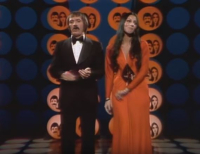 Opening Song: “All I Ever Need Is You” (Video)
They open with their recent single release from an upcoming album. Cher wears an orange or red polyester (my separate notes show different theories I had on that) with a sparkly diamond cut in front. Sonny is back in his suit with his bow tie. Sure, he looks good in suit...and this is a even a nicer suit...but...boo. Sonny points at and fixes Cher’s hair, which is shinny and curled. This is their uptempo version of the song I do not like but they always played it this way outside of the album. Cher tickles Sonny's chin. Cher singing “melting snow” literally makes snow melt. She wears big, beautiful hoops that peek out of her hair.

Sonny & Cher just recorded and released this single in October of 1971. The album of the same name was not released until 1972. The single hit the UK Easy Listening chart at #7, the UK Singles chart at #8, the US hot 100 at #7, and the Adult Contemporary chart at #1.

Ray Sanders took this song to #18 on Hot Country in 1971. Kenny Rogers and Dottie West took it to #1 in 1979. But first was the lovely 1971 Ray Charles version. Sonny & Cher received a Grammy nomination in 1972 for the song in the category of “Best Pop Performance by a Duo or Group.”

Banter: Sonny thanks the audience for their fan letters of the summer replacement shows. Sonny & Cher discuss their Christmas trip to Hawaii. This is the joke that often gets excerpted on Biopics. Sonny talks about round trip tickets and Cher quips, “who said anything about round trip. ” Sonny admonishes her “You’re bad Cher. There are jaw punches, mother jokes and nose jokes. When they gather to do the song again, Sonny yells “Talk about it!’ as he does (see “I Got You Babe, S&C Live Vol. 1).

The do this song again in the opening of a 1976 episode.

The stage is still small. (Click any pics to enlarge.)

Skit: Sonny reads a poem “What is Life?” with a choir in the background and they all fall asleep. Steve Martin (a new writer and cast member in full beard pre-gray hair of his mid-1970s comedy debut) falls off a chair very dramatically.

Is the poem boring or is Sonny? We do not know. 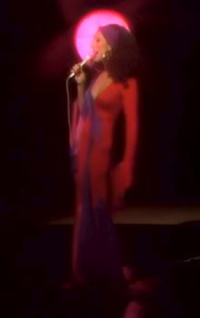 Cher wears a head-wrap of intertwined red and purple, like her dress with long gypsy sleeves, huuuuge hoops (the kind I came to call Cher hoops), and she wears a curly wig. Her nails are super long. Young girls took note. This is a lip-sync performance and at one point it seems she messes it up. Cher is framed by a big pink orb of light. At the end she does this super awesome thing of dropping her mic! Yes, Cher was a mic-dropper back in 1971, albeit a tiny drop. It’s still super awesome.

Like the duet album mentioned above, Cher also had new recordings to push. Her solo album and this single were both released in September of 1971 and the single went to #1 in Canada and the US. It also went to #4 in the UK and #6 on the US Adult Contemporary chart. It went to #2 in Singapore, New Zealand, Malaysia and #3 in Ireland and #5 in Australia. It was certified Gold.

She would perform the song again in a live version with a real wagon later on the S&C Comedy Hour and then once in a medley on her own solo television show. 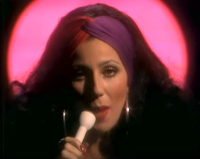 Skit: Sonny dressed as Henry VIII over acts, mispronounces and his beard falls off. Cher calls him an Italian Zepplin and Glen Ford comes on stage to give Sonny a citation for overacting. 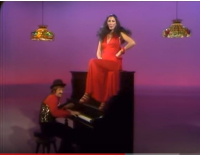 VAMP: Cher is a bit updated here with a new red, polyester dress. She wears curled hair and a yellow bracelet. There are Italian pizza-parlor lamps hanging behind her now and Sonny at the piano playing in a very silly manor. (Video)

Concert: “Loves Grows (Where My Rosemary Grows” / Where You Lead (I Will Follow)” (Video)
Two parenthetical songs in one medley!
Cover of Edison Lighthouse, 1971, and Carole King, 1971 (Tapestry album)

Sonny & Cher are wearing matching black and gold outfits. Cher wears a small bun on her head. They’re still singing kind of rough in these early ones. The set has changed to a Hee Haw looking grid behind the band.

Skit: Sonny chats with Harvey Korman about how to handle Cher and looking for zingers to combat hers as well as how to handle her put-downs. Harvey recommends Sonny model after Don Rickles or Joey Bishop. I can't remember this skit at all and I'm kind of okay with that.

Cartoon: Sonny & Cher commemorate Christmas by singing “It Came Upon a Midnight Clear” (as if they were framed in a Christmas card, it’s freakin’ lovely) and introducing John Wilson’s cartoon for their rendition of “One Tin Soldier” (Video)

"One Tin Soldier" is a cover of The Original Caste, 1969, and then the Coven version for the movie “The Legend of Billy Jack" in 1971. This was one of the most memorable and popular of the Wilson cartoons and was re-aired during a future Christmas special. 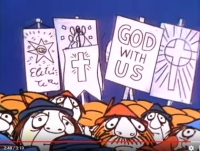 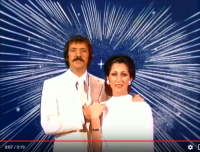 Cultural spot: This “All in the Familius” opera is a take off on the wildly popular #1 Neilsen rated show All in the Family, which also aired on CBS and filmed on the same set as The Sonny & Cher Comedy Hour, as did The Carol Burnett Show. Actors from all the casts would frequently visit each others’ sets. Sally Struthers (who played daughter Gloria) was romantically involved with S&C’s director Art Fisher. (Video)

Freeman King introduces the opera from the balcony with his parents, "Spot and Rover" and with his particular combination of Ebonics and pretension. The show tried to showcase a rainbow of multiculturalism that would surely offend today with its distillation of stereotypes. Steve Martin  plays a gay man somewhat too cartoonishly, for example. But back in the day, having such a sight of diversity on television would have seemed much more politically progressive. Baby steps.

Carol O’Connor makes a surprise appearance as a CBS censor. The joke here is twofold: Carol confronts his own caricature, Archie Bunker, played by somebody else and the joke plays on the fact that both All in the Family and The Sonny & Cher Comedy Hour were shows tormented by the CBS censors who tried to repress not only Cher’s belly button and sexual innuendos but the continual adult and political commentary of All in the Family.

All in the Family and creator Norman Lear fought the censors and won in 1976:

This is the best of all the Cultural Spots and showcased the show's progressive sensibility and solidarity with sister-show All in the Family. The opera also served as an ad for All in the Family to celebrate the shows top standing in the ratings: “above Bob Hope himself,” Carol O’Connor proclaims. O’Connor also says “damn” in the skit. At the end, Carol O’Connor kisses Cher’s hand and she shyly demurs.

I Got You Babe: Sonny & Cher wish everyone a Happy New Year.

Highlights:  Cher mic drops at the end of GT&Th. In VAMP sketches Cher starts to play a uniquely victorious femme fetale. The first airing of “One Tin Soldier.” The All in the Familius meta-opera. The first appearances of new cast members, Steve Martin and Teri Garr (and Bob Einstein as writer). Cher’s Mae West, Marlene Dietrich and Edith Bunker impersonations.

(Get TV cuts out the Concert, Harvey giving Sonny tips, and One Tin Soldier)