The Intro:  The show never consistently used an intro segment, but in later years these became more common. In this one, Cher speaks directly to the camera with a very seductive look, “Hi, I’m Cher. Fly me for the next 60 minutes!” Imagine how forward this would have seemed in 1972 from a married woman. They were definitely pushing some boundaries here: a young woman making a sexually suggestive comment inviting possibly untoward attention...and she was married, possibly suggesting married unhappily but it only worked because the audience didn’t believe it. So many ironies to unpack there. Let's just leave it.

They're wearing a lot of orange here (or is that maybe a butternut squash?) Cher is in a sweater or polyester dress (is she wearing a bra? is this early jiggle TV?) Sonny is in orange and black. Cher for the first time has very brushed, shiny, amazing hair….which is a great improvement. And the whole stage (and Cher's hair) is showing a gigantic improvement in stage lighting. Lots of Cher hanging hand while they sing. The song ends again when Cher goes rogue.

Sonny also has a groovy belt. Mr. Cher Scholar watched this episode with me and said (I swear to God), “That’s obviously not holding his pants on. Maybe his cock is holding his belt up."

Mr. CS also wondered if Sonny was reading cue cards. Most definitely. Sonny never seemed to take his job of memorizing lines as seriously as Cher did.

Banter: They talk about what makes a marriage a success. Cher makes an Italian and a mustache joke. She always gets a little carried away with the song, Sonny insists and they joke about the word segue. Sonny claims they don’t take each other for granted. More irony here. Another piece of advice is to just "Get it off your chest," Sonny says, which turns into a boobs joke.

Cher said, after Sonny's funeral, that he had really beautiful hands. He gestures a lot in this skit so you can really see his hands here.

Cher says, "Love means never having to say you’re Sonny." That made Mr. CS laugh. Sonny says it "takes a big person to apologize for their mistakes." All of this continues to be ironic considering Cher never got anything fully off her chest and Sonny didn't seem like a big apologizer. Cher makes fun of his gesturing and he says Italian people use their hands. Quickly, Cher says "I know! I know!"

Sonny also says imagination has given Cher's life a little wallop (of excitement). Cher makes some WOP jokes from that. "One more word from you and I’m gonna WOP you one," Sonny says. That is totally not funny today. Cher points when Sonny points. Sonny tickles Cher in the ribs. Cher grabs his arm at the end.

I love the ends of the intro song (and have since I was a kid)  where you see them from the back view as they bow and Cher shakes her hair.

Skit: Sonny in a tux sings the song, "Whispering.” (Full episode, part 2)
Cher has great earrings and wears a green dress and braided hair. Tony Curtis, Dinah Shore walk on and snicker behind Sonny's back while he sings. Glen Campbell and Carol Burnett do the same. Turns out there is no back to his tux.

These early shows have a recurring scene transition where Cher nonchalantly pulls down a video projection screen showing her singing the solo number. Some good hang-hanging to be seen below. 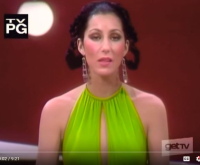 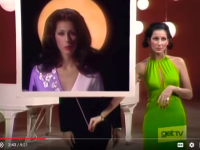 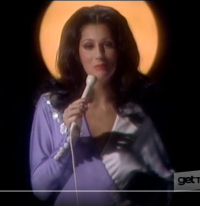 Cher wears a violet and white wrap dress with big hair. It's like rich housewife hair or a bad Marlo Thomas. She does very dramatic teeth licking at the beginning, as she sings in front of a big orange light behind her head. Her rendition of the song is kind of languished and drawn out. The show pioneers effects like green screen and double images. In many of the solo numbers, Cher finishes by demurely looking down. 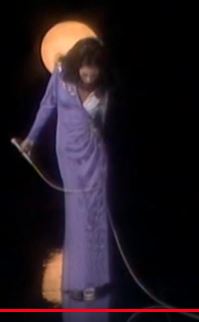 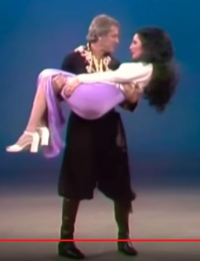 Skit: Sonny arranges a memorial for the 20th anniversary of Tony Curtis’ movie The Prince Who Was a Thief. (Full episode, part 2)
Full eBackstory: Tony Curtis and Sonny (and Cher) are ostensibly friends. Tony has sold them one or two of his used houses at this point. Ted Zeigler comes in and a very goofy Steve Martin appears in this skit. Tony Carries Cher off screen.

Skit: Dinah talks to Cher about how inspirational she finds Sonny & Cher to be and how they’re surrounded by a glowing light. (Full Episode, part 3)
Cher responds that this is “unproved hearsay.” Cher wears a casual sweater and a bun. Cher once said her black hair was very hard to light. You can see this as an example of the problem.

Guests of the show often meet S&C in front of this black and white backdrop. 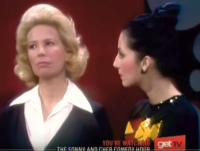 Cultural spot: Freeman King introduces this segment reviewing all the many detectives seen on TV.  Detective Fat is a satire on the show Cannon with William Conrad (a future guest). (Full Episode, part 3)
Tony Curtis plays the fat detective and Dinah Shore plays a maid and they all wear fat suits while making jokes about Chicken Delight and apple pie. There’s a running refrain where a food is mentioned, as in “that was a fine kettle of fish” and the cast says, “mmmm….kettle of fish!” It’s very punny and the floor collapses at the end under the weight of so many fat characters. It would hardly survive an accusation of fat shaming today but I sometimes do the "mmm....jelly fish" thing to people to see if they have any reference point to what silliness I'm saying.

Skit: Tony and Sonny are at a park bench and Tony is telling Sonny about a new fashion trend, the sit-down-suit, a man’s suit that doesn’t ride up when he sits down. Unfortunately when he stands up, the legs and arms are seen to be very long. I remember thinking this was funny the first time I watched it.

You can see a new light bank on top of their set, rows of white bulbs. Maybe this is the evolution of the set piece we saw in Episode 7. Sonny screws up the lyrics...like badly. Cher wears a long white, knotted necklace. I love hearing Cher sing "Mr. Tambourine Man," not only the "Hey, Mr. Tambourine Man" but the part about the "magic, swirling ship." Dinah joins them at the end. 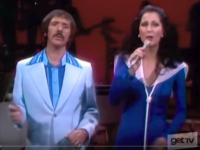 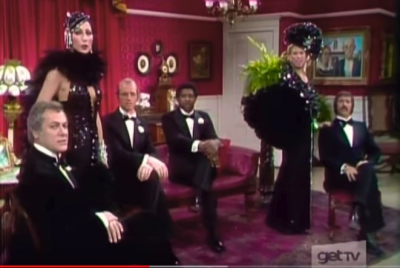 Headlines in the Papers: This is the first installment of the news rollup segment.  (Full Episode, part 4)

First was this swanky Victorian living room version. Later would come a hillbilly porch version. This show often got fatigued with its own formats, like when VAMP turns into Lady Luck. These skits are hyper-short and not great when you watch them decades later. The jokes were highly perishable to begin with and written to be milk-toast enough to not offend anybody even though they’re about current events. Imagine someone trying to manage that divide in 2019!

Topics for this installment include the upcoming presidential election, a nuclear explosion in Alaska, the Godfather movies, the Mars probe, Watergate, busing, Women’s Lib (so 70s, that term!!), the Beatles, phone tapping, Ralph Nader, democrats and George Burns makes a cameo appearance to tell a joke.

Guest stars would participate and it would seem fun but always felt claustrophobic. There were two cameras and closeups and it was just so boring. Here’s some early Steve Martin mugging and Cher next to Murray Langston.

I did love that big fern on the pedestals though. Sonny & Cher to a spoof on the American Gothic painting while singing “The Beat Goes On.”

I Got You Babe (Full Episode, part 5)
They're doing very abbreviated versions of the song and Sonny's emphatic whoops get me for some reason; it's like a trigger right into my joyful childhood. He holds 2-year old Chastity while Cher holds her hand and they sing the song to her. It's like the sweetest thing. She’s not in a matching dress with her parents, which later she will likely be.

Sonny waves goodbye in front of Cher’s face again. Cher ignores it this time. I hate that!

Highlights:  Good opening skit and first installment of the fat suits, which although they haven't aged well, they started a popular catch phrase.

Get TV cuts S&C at home and the Tony/Sonny fashion skit.