Opening Song: “Good Day Sunshine”  (Video)
Cover of the Beatles (1966)
The stage is still small. They're wearing white outfits with orange accents. Sonny is in a white suit with an orange shirt and big collar. Cher white polyester with orange diamonds. Her hair is straight and shiny.

Sonny takes over the song much to Cher's dismay.

Cher tilts her hip out and places her hand on her hip, a clear sign of indifference. She looks bored and says something sassy. Sonny points at her. It's a show of body language cues.

Banter: Sonny claims to love Cher very much. He loves being her husband and loves "having her on his show." He accuses her of singing off key. This is ironic because Sonny is known for singing off key. Cher says she can't be singing off-key because Sonny was the only one singing. They talk about Sonny’s family, a clan Cher claims make up 11 fat jokes, the one with a mustache, your mother. The fat jokes and the hairy women jokes don't land as well as the marriage jokes still do. Sonny says, “I know I’m gonna get it tonight” (meaning grief) and Cher says “No you’re not.” This gets a big laugh. It's a double entendre popular on this show.

Sonny talks about comedy setups and how the straight man (Cher) works with "the old goombah" (Sonny). The goof and the straight man is a very common duo structure. Sonny gives Abbott and Costello and Rowan and Martin (Laugh In) as examples. Laurel and Hardy, the Smothers Brothers and Martin and Lewis are also good examples, as are the couple duos of Burns and Allen, Meara and Stiller (Ben Stiller's parents), and Louis Prima and Keely Smith (a bickering duo often compared to Sonny & Cher). Cheech and Chong are a good example of two goofs in one act. In the case of Sonny & Cher, the straight man (Cher) gets the laugh. But Sonny claims without his setups, she wouldn't get any laughs. He calls her an Indian Sphinx and Sitting Stone. He retaliates from her Italian jokes with his own Indian jokes. In America's global and ethnic consciousness raising, this seemed okay at the time. Now they would come across as mean spirited. Cher makes a short joke.

Skit: In “Information Please” Carol plays President Nixon’s assistant to "marketing, research and economic stability." What a combination of job duties! He speaks to the camera, trying to explain Nixon’s wage and price freeze to the nation in a very nerdy voice. "What is the problem and why do we have it?" He accidentally rolls down a portrait of Nixon. Jean Stapleton arrives, playing a generic housewife questioning all his claims. He tells her, “Madam, will you stifle yourself?” which is a play on his All in the Family character Archie's constant admonition to Stapleton's Edith: "Stifle it Edith!" Ted Zeigler appear as part of the “Guy Liberation Front.” Hardy har. A reference is also made to the Jewish Defamation League and I'm not sure how a joke was made from that but...

Cher Solo: “What a Diff’rence a Day Makes”
Cover of an original Spanish song by Maria Grever (1934). The English version was popularized by Dinah Washington (1959). Cher sings against a reddish background in a conservative dress, her hair in a tight bun. She sings the song later in the decade but I really wish this particular version had been online. The melancholy performance made quite an impression on me when I was a kid. In fact, this is the song that first comes to mind when I think of Cher as a torch singer. It was also the first song that ever would occurred to me the day after falling in love. Unfortunately, it was also the first song that came to me again the day after breaking up.

Skit: Sonny is dressed in feathers and says he’s been studying birds in order to be the first man to fly. It's a trope of the show: Sonny on an empty stage in some ridiculous outfit while Cher makes fun of him. These skits are getting repetitive.

VAMP (Video)
Cher's in the lighter red dress and curly hair, with big earrings and the pizza-parlor lamp behind her. She now lays forward on her stomach, atop the piano in between segments. She's getting sassier performing the song, with jaunty shoulder movements. 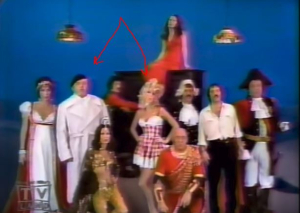 The green screen shows they didn’t air the third installment. Cher as a blonde and Carol in a beret (see above). Cher scholar Ed notified me that TV Guides indicate this should be a Brigitte Bardot skit.

Cartoon: This is a rerun of episode #2, “Mountain Greenery/Big Yellow Taxi”

Skit: Sonny & Carol are talking in the park (Sonny in the park seems to be a recurring theme with male guests). Here, Carol proves to Sonny that Sonny's singing can shatter wood. This seems to bring down the house.

Guest Spot: Carol O’Connor sings “Remembering You” (Video)
The song is a mashup of his own lyrics to the closing music of All in the Family, music written by Roger Calloway (who plays the piano). 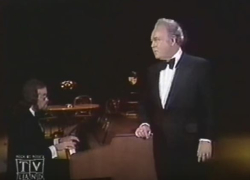 This is their second go at this medley (first was in episode #4). Cher is in a baby blue dress and a fro wig. Sonny wears white with a concho belt. Indian “threads” were very popular in the early 1970s with fringe, silver and leather accouterments being added to pants and shirts. My notes say this is not the party version the first rendition was but there’s plenty of shoulder shaking evidently and I have multiple stars by it. It’s unfortunately not available now online.

Cultural spot: Carol pretends to be Freeman King and Freeman King plays the character of Archie  introducing this rerun of Commercial Americanus, the Opera of TV Commercials from episode #1, complete with Jimmy Durante. You would think I would like these. Carol Burnett was doing funny satires of TV commercials around this time, too. And I liked the skit idea on an abstract level: the mashup of low brow subjects and high brow operas. In this one Princess Celery (Cher, because she has no shape??) wants to wed commoner Oscar of Vienna (Sonny, because he's Italian). They sing about McDonalds, the Yellow Pages, Oscar Meyer hot dogs (hence the Oscar of Vienna). But these big productions (with their elaborate casts and scope of set) always seem a bit blah to me...and drawn out. At the end, the curtain falls on them. I never really look forward to them.

I Got You Babe: This show closes differently with Sonny, Cher and Carol O’Connor singing "Remembering You" instead of "I Got You Babe" (Video)

Cher pretends to be playing the piano and all three of them stay out on stage for the credits, not talking but dancing to “The Beat Goes On,” Cher arm and arm with Carol and Sonny, everybody looking uncomfortable. You get to see the big Sonny & Cher head on the back of the piano.

This reminds us how powerful it is to see Sonny & Cher walk off stage at the end of each show, how that creates some loneliness in the viewer and provides Sonny & Cher with some mythological other-ness. They literally disappear into the heavens of backstage, unlike the rest of us who are stuck here in our seats. 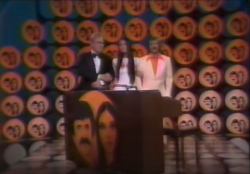 Highlights: Carol O’Connor singing his own theme song and the alternate closing. The Nixon skit was good as was the second version of the “Stagger Lee/Rip It Up” medley.