Cher and The Muppets (and Me)

So I've been obsessed of late with Muppetstuff. This is not usual for me. Not bigly into puppets. I did appreciate Seasame Street for it's friendliness of the neighborhood and multi-culturalism (even when I was a kid) and I was obsessed with their closing video that simulated driving down a country lane (oooh, I can't wait to drive!), but it was hardly my favorite children's programming. If asked, my favorite Muppets then were Oscar the Grouch, Mr. Snuffelupagus and Grover. But I much preferred The Electric Company (which seemed groovier, much more geared to older kids and had Rita Moreno and Morgan Freeman on it), ZOOM (where kids made stuff), the catchy School House Rock songs, Scooby Doo (particularly the Headless Horseman episode), Looney Tunes reruns and Chritmas stop-action specials. 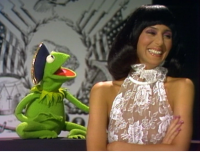 Albuquerque also had a show called Villa Alegre which I liked and St. Louis had a weird local show called The Letter People with letters as characters and all my friends watched that show but I only liked its folksy theme song.

Anyway, after I was about 7, I stopped watching children's programming altogether and had moved heavily into to Sonny & Cher TV, The Jeffersons and  The Love Boat (which I checked in on every week to see if Sonny or Cher would appear). I never even watched The Muppet Show like other kids my age did, except for a few random episodes.  (And again checking in each week to see if Cher or Sonny would be the guest. Sonny made about four appearances in The Love Boat but that was it. Neither appeared in any Muppet shows or movies).

But things changed recently for me when tweets from an account called Muppet History started coming up on my Twitter feed. The backstory of this account was a very moving one. The user was posting Muppet history as a way to deal with depression. Over time, this person had gathered up thousands of followers, found a new job and became engaged! And the posts were interesting and friendly. And because I was liking so many of those posts, other official Muppet accounts were offered to my feed as accounts I might like. I started following various Muppet characters like The Count, Oscar the Grouch and Big Bird. 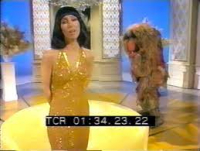 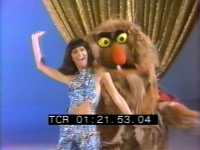 Some account by Pepe the King Prawn came through my feed and this was a Muppet I'd never even heard of since he wasn't developed until decades after I stopped watching Sesame Street. But the tweets were so funny, okay, that I started looking up Pepe videos on YouTube and these were so charming and funny, I started showing them to my in-laws who were visiting and we all became obsessed (okay, mostly me) with catching up on all things Pepe. I don’t know why it is, but Pepe cheers me up so many times. I think it’s because he’s got an inflated sense of himself and yet still has a big heart. He’s a crusty softie, as it were.

A few years ago I had sent Mr. Cher Scholar this animated gif of Kermit typing because it was funny. Mr. CS then divulged that Kermit was his spirit animal. He did watch The Muppet Show and was not only amused by Pepe but interested in watching all the movies and television shows we'd missed over the years, like the spoofs of  Treasure Island and Wizard of Oz (good Pepe stuff in that one), plus original new movies and TV shows like Muppets Now and The Muppets, ABC (terrible name confusion there with the TV show and movie),  not to mention re-watching the original variety show so I could see it.

And watching that original show you can see how pieces of it made it to other shows, like the final part of the opening animation of Family Guy or the cast gathering at the end of Saturday Night Live. The Muppets turned out ongoing, behind-the-scences satire on show business (and even band culture within show business via The Electric Mayhem), commentary that has continued into the "reality" format of the funny and smart The Muppets, ABC, and Muppets Now shows (the later with satire on cooking shows, self-help youtubes, game shows and celebrity interviews).

Since watching all of this, I've become attached to a few new characters. Mr. CS and I recently had a conversation about which Muppets we would sleep with (assuming they weren't fictional characters and...uh....puppets). He said Janis, or Denise, Kermit's new girlfriend (there aren't that many Muppet ladies if you discount all the chickens). I said Bobo the Bear, (his serene confusion is endearing to me), Sweetums (recently described as brash and shy, ergo ditto) and if I were really drunk and we both had had a really bad day at work, maybe Scooter.

Which brings us to the Cher/Muppet interconnection. According to the site Tough Pigs who contacted Jim Henson's biographer Brian Jay Jones the Cher show was pivotol to the Muppets in two ways. One, it was decided due to how it appeared, Jim Henson should no longer be performing Muppet characters like Sweetums with celebrities. He would continue to perform Kermit with celebrities. Secondly, Cher's executive producer George Schlatter encouraged Jim to create a Muppet Show pitch reel with segments from the Cher shows in order to gain interest in for a prime time show. He did and The Muppet Show was the result. You can even see some elements of The Muppet Show from those Cher appearances, like the interviews with Kermit sitting up high on a shelf next to the standing guest and the song and dance numbers between celebrities and Muppets.

Tough Pigs also indicates it was difficult to get celebrities to appear on the first season of The Muppet Show and Tough Pigs wonders why Henson couldn't get Cher show guests like Ray Charles, Bill Cosby (also a Sesame Street guest), or The Smothers Brothers, not to mention Cher herself to appear that first season.

Tough Pigs says Cher was announced in a Muppet fan club newsletter to appear on the fourth season but it didn't happen.

Cher show episodes with The Muppets:

Clips of Cher and Muppets:

Later on The Muppets, ABC, during a cast kareoke Beaker and Mr. Honeydew sing "I Got You Babe."

Almost forgot about the Cher/Frank Oz controversey on her movie Mermaids that happened in 1990 when Cher, according to The Los Angeles Times "chewed through two directors, Lasse Hallstrom and Frank Oz, before Richard Benjamin was brought on board to just wrap the whole thing up."

I couldn't really find a good page of Frank Oz's side of the story. But, as one of the two driving forces behind The Muppets, I find it hard to believe he's "an idiot." In fact, Jim Henson gave Oz a lot of the credit for determining the direction of the adult Muppets. I'm more more likely to side with Oz than Peter Bogdanovich in terms of famous Cher-director disputes. Also, the movie Frank Oz went on to complete after his Mermaids-firing was really good, What About Bob. Unlike most Cher fans, I'm also not overly fond of the Richard Benjamin result in Mermaids. Is the movie a comedy or is it a drama? It seems never fully committeed to either. I would have loved to have seen a quirky art-house Hallstrom version of the story, but then I find it hard to picture Cher in that kind of movie. And if this was truly Cher's project, she should have had agency to choose and re-choose a director. So maybe alls well that's ends if not well, somewhat okay. We got What About Bob out of the deal and a bunch of good Hallstrom movies after 1990.