The title credits include video out-takes of Cher as the old-maid school principal from this episode. In the intro Linda Ronstadt wears a curly wig extension. Liberace is in his piano suit.

Torch Open/Opening Song: "(I Can't Get No) Satisfaction" (Video)
Cover of The Rolling Stones (1965)
Cher wears a rainbow halter dress with a matching rainbow, fringe wrap.  She sings a very slow version of the song (that sounds very expensive) and then throws off the wrap. Her hair looks great as do her abs. The backdrop curtain is a patterned looking gauze with fringe. 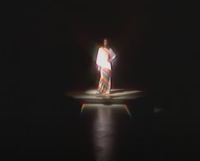 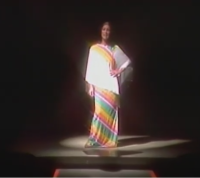 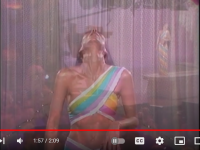 Monologue: Cher talks about the strings coming off her dress and how there are probably only two threads holding the dress together; she talks about old-wives tales although she says she's not superstitious: that rain during sunshine means the devil is mad at his wife; how dropping a knife means company is coming. She makes a bad joke about dropping a fork. She talks about black cats walking across your path and then references Wilt Chamberlain. She tells some tale about a frog she dubs a "croak joke."

Skits/Song with Guest: Cher with a curly wig updo and a black and silver pantsuit and Nancy Walker in similar pantsuit introduce themselves as "two gorgeous sex symbols." Cher talks about how dumb it is that girls will spend 8 hours a day making themselves beautiful, fixing themselves up on some chance a guy will take them out and mess them up. Nancy agrees, the things women go through for men! "Is it worth is," she asks. "It sure is," she decides. As they introduce skits, they sing a new song called "The Trouble with Men" about how they've had it with those "super-macho cats" on "ego trips"...and rude!

- Nancy Walker plays Wanda the Fat Lady, 500 pounds of love, who complains about dating circus men. She does a lot of physical comedy in the fat suit. She says she has a hard time holding on to men and jokes, "and don't anybody say try to sit on him!" (That made me laugh). She said the midget was not half the man (oy), the Siamese twins were two-timing her (oy vey), the rubber man only lasted a short stretch and was on the rebound anyway (sigh), the magician kept disappearing, the alligator man had a big mouth, the elephant trainer mistook her for an elephant in her gray dress, the trapeze artist wanted her to swing, but she's expecting big things from the giant she's dating now.

- Cher is a Red Cross nurse with a bobbed wig. Her patient complains he can't get any information about his condition and she keeps joking he has very little time to live. Lots of death insinuations that are not very funny and ultimately depressing. There's a Cleveland joke.

Cher and Nancy Walker finish the song and talk about how only one in a thousand men can appreciate them for their unique qualities. But how to get rid of the other 999?

Donna Jean Brodine: This time Cher shills the Laff-o-Matic, a comedian kit in a wooden box for comedy teams like Laurel and Hardy, Abbot and Costello, Lewis and Martin, Nixon and Agnew. She brings up her side-kick named Lamar Joe Puckett ("my entourage") and antagonizes him with Groucho-glasses, bad jokes on index cards, a Seltzer bottle, joke-scissors with a horn, a pie in the face, a pie in the pants (poor Lamar). Cher ends up with whipped cream on her face which ends up looking more racy than funny. She ends by whacking Lamar with a board. Cost of the kit is $26 sent to Box 10, Sucker Falls, South Dakota.

Cher Solo: "Sunshine on My Shoulders" (Video)
Cover of John Denver (1973)
Cher sings in an artist's garret at the top of a building, lit with candles (the artist is starving obviously). Cher wears a maroon or purple (depending upon the broadcast quality) and silver robe-dress and her hair is in a loose ponytail. She sings through a rainy windows that look like they're made of gauze and she's looking very sad. Cher milks the song until it's dead. Although her "lovely" is very lovely. At the end we see the entire room full of paintings. It's a big set to only show fully for 2 seconds.

Life With Laverne (Video)
Cher drives up Liberace's driveway in her car. The yard has lots of cypress trees and a white fountain. Show regular Jack Harrell plays Liberace's butler. The house is full of Liberace gaudiness (go watch Behind the Candelabra with Michael Douglas and Matt Damon for more information on that). Cher says she's late for his home tours and bullies her way in. Liberace relents and shows her his gaudy things: candelabra, chandeliers, gold doors, blue rooms. She tells him she loves him and drops a lot of sexual innuendos which he deflects because he's Liberace and it always amazes me that at the time so many women did not know he was gay and that these deflections would have been taken at face value. [Full disclosure here I have always found Liberace extremely off-putting, which is unintuitive because I like gay men and piano players and some gay piano players but Liberace has always seemed to me somewhat overcooked.]

They tour his bar, the outdoor patio he calls a lanai. His home has an ocean view and he says he can see Catalina Island. She demurs from seeing the bedrooms believing Liberace wouldn't be able to control herself. He assures her he can (like three times, which actually would have been a really funny bit if people had known he was gay at the time). We see his pool and cars (which reminded me of the time my friend Julie took me to the Liberace museum in Las Vegas). The cars have stanchions around them so it does seem like Liberace was taking tours through his house at the time.

Laverne tries to horn in on dinner with him. He gets out of this and goes over to his piano to sing "I'll Be Seeing You" (1944 from movie of same name) with Laverne and Liberace makes fun of Laverne's screechy singing. Then she leaves while he plays a very embellished version of "The Way We Were" replete with his famous hand dives. Liberace's playing reminded me of something someone once said about him (maybe it was in the biopic mentioned above), that he really wasn't a great piano player and that his whole style was complicating the simple and simplifying the complecated.

The piano suit he's wearing and the camera view of Liberace through the lifted piano lid totally matches the Christmas SCTV skit. As a reminder, the Elton John outfit in this SCTV skit was also a spoof of the Cher show, episode 1.

Laverne tries to rope him into something else before she leaves. He says this final statement about his gaudy house, "it's humble but it's home."

This always was and continues to be my least favorite segment of this show.

Skit: Cher plays an old-maid principal of Lizzie Borden High School named Miss Primly in a gray dress with a big ass built in. The cafeteria food is so bad the parents are calling to complain. Miss Primly dials for the cafeteria nutritionist with one of Cher's long manicured fingernails. Walker comes in holding a spaghetti sandwich that sells for 45 cents. Miss Primly says this is unacceptable and so Walker re-arranges the sandwich to be a plate of spaghetti with bread on the side for a buck-25. Walker says she puts detergent into the meatloaf so the dishes can wash themselves. She makes a chili-pepper joke. Miss Primly talks about kids "losing cupcakes" and "freezing cookies." They argue about Walker's food tasting like glue. Nancy Walker quits in disgust and sticks to the chair (glue joke).

Guest Spot: Linda Ronstadt sings "When Will I Be Loved" on a stage with a circle of lights and a nighttime mountain backdrop. My friend Christopher says Ronstadt has the most pure voice he's ever heard and she is his #1 favorite artist. Which may be so, but she performs this song like a very stiff junior-high-school wallflower. As a perfect example, she's braless here in her thin peach dress and when she does a little dance during the guitar solo nothing moves.

Cher will sing "When Will I Be Loved" later in 1981 in Celebration at Caesars with all the sexy cowboys.

Duet with Guest (Video)
On the same stage set Linda just finished singing on, Cher joins her for a duet medley. I'm beginning to think the Ronstadt stiffness might be nerves. She looks miserable through this whole thing: furrowed brow, scowling next to Cher's breezy happiness. They're wearing matching flowing peach and purple dresses with gypsy coin embellishments (Cher has matching earrings). Cher wears a wavy wig and Ronstadt is in a curly wig. They sound good together and when you look closely, have very complimentary teeth.

At the end Linda and Cher smile and look happy.

Close: Cher is back to the opening set to close the show. Cher tells us to "stay cool and be nice to each other and I love you." Linda Ronstadt and Nancy Walker join her. Cher and Linda do a reprise of "Rip It Up" while Nancy holds her ears and then starts dancing. The annoncer gives credit to Jack Harrell and the man who plays Lamar in the Liberace skit as someone named Bear Caprell, which after a Google search doesn't seem right.

VH1 was a half-hour show and is missing the Men Are Trouble skits, the Lizzie Borden High School skit and Donna Jean Brodine. The TimeLife is the full episode except for the Liberace/Laverne duet of "I'll Be Seeing You" which was cut out of the Liberace spot.

Highlights: This is one of my least favorite episodes which is probably why I've been so snarky here. Cher has been having a lot of female guests on this show, none of whom she has seemed the least bit threatened by; and this show is a good example of friendliness at the end of an uncomfortable performance. Cher seems genuinely friendly among women.