The title credits include video out-takes of Cher as Mrs. ("Bride of") Frankenstein and the bluebird from the Kate Smith skit.

Torch Open/Opening Song: "All I Really Want to Do" (Video)
Cover of Bob Dylan (1964)
Cher is covered in big white ruffles and a big yellow rose. She throws it off to show a yellow, lace-embellished pantsuit with halter-top. The top really shows off Cher's great shoulders. The stage has lace curtains that entangle when closed (boo). Cher seems happy singing the song.

Cher does a big hair-fluffing hairflip at the end of the song. 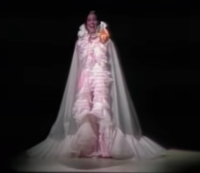 Monologue: Cher introduces Kate Smith as a "terrific lady" and says that her other musical guests are "far out" and can really "get down, the Acid Queen herself, Tina Turner and her husband Ike. She calls Tim Conway "one of the funniest men in the world." She then says for 10 years she was married to "a kind of a special man. In those ten years he gave me a lot of things, a lot of really nice things and one of nicest things he's ever given me is something I would like to share with your right now and her name is Chastity Bono." Aww. That's nice. Chastity comes out. Cher puts Chastity up on a stool. They kiss. They're wearing the same outfit. Chas has grown really long hair since last seen on The Sonny & Cher Comedy Hour.

They talk about Chas going to school and they play a game of close-your-eyes-and-remember-what-I-look-like. Cher says Chastity is 8 feet tall with a green beard, a red eye, an orange eye, and curly red hair. Chastity says she's way off and then tries. Says Cher has black hair, brown eyes, "you got a nose" (everybody laughs), crooked teeth (to which Cher takes great umbrage). Chastity continues, "false eyelashes" (again laughing) and Cher says "that's the only false thing to which Chastity corrects her saying her lipstick also counts as fake. They then start laughing a bit uncontrollably together. Cher asks "What about my nose" and Chastity says there's a bump on it. Cher says, well what's your favorite thing about me and Chastity says, "Your TV show." That sets everybody laughing again but it was clearly a set up for Chastity to enact her own big TV show entrance.

Chastity hides as best she can at the back of the stage. Cher says, "Please don't fall off!" Chastity says she needs Cher to stay on stage as her "little helper." Chastity makes a big entrance and they both sing "All I Really Want to Do" together and then Cher coaches Chastity on how to introduce the guests. Chastity doesn't like Cher's advice and puts her hand over Cher's mouth.

Eventually Chastity introduces all the guests again but calls Tim Conway Tim Conrad and everybody laughs at that. So cute, kids muffing things.

Skits/Song with Guest: Kate and Cher sing an original song called "Relationships" with skits. Cher is in a curly wig in an orange-ish dress. Kate Smith wears a orange dress too. They try to talk like each other, Cher very uptight and Kate saying things like "jive," "right-on" and "what's happening." Kate says Cher is loved by old people, young people, skinny people. They sing a duet about all types of relationships. They laugh and hug at the very end.

+ Kate is a mama bird and Cher plays her daughter bird ready to leave the nest. They both wear a beautiful shade of blue feathered costumes and the nest has pretty green leaves. Young bird Cher says the nest is dull and only bird-brain boys are around. Kate asks about the owl who has been around. Cher says, "Who?" Kate calls Cher her pretty robin. What about the eagle? Cher says he's dull and into too heavy pecking. Cher wants to move to Hollywood to be in a movie like her cousin who appeared in The Birds. Kate says that's a "fowl" idea. Cher says she will "wing it." Cher flies off with pulleys, showing very yellow legs. Kate calls her a proud bird and hopes to never experience that again. But just then another egg cracks and Chastity appears in another pretty blue costume saying she's ready to leave the nest, too. Kate hugs Chastity so she can't fly off. Kate does a good job here and seems genuinely sweet. 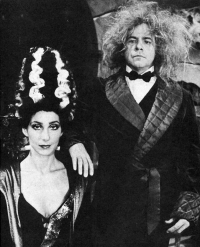 + Tim is playing Dr. Frankenstein who is reading a letter about spare body parts that catches fire from a nearby candle. Typical Tim Conway schtick here. The set is very cool. An inspector arrives to ask if Dr. Frankenstein has created another monster. Conway insists there is no new monster but his wife, Mrs. Frankenstein. Cher comes in dressed as an exaggerated Bride of Frankenstein with a silver lightening dress and she's carrying a tree trunk (she's very strong you see). Her name is Sharon. She hugs the inspector with great strength and he says she has the arms of a man. Conway says yes, exactly, a man from Pittsburgh. She serves them tea badly and this is all very funny. She cracks Conway's cup and he holds it up and quips quickly "I'll just take half a cup." I wish this skit was online; it's very good with Conway ad libs like, "She gets closer every time, I tell you." Cher goes to kiss Conway and he makes a motion of his mouth being sucked into her mouth and then laments he used vacuum parts for her lips. At the end Cher wants sex and Conway tries to beg off, saying he has a headache. But Cher insists. Cher and Conway have a cute kind of chemistry between them.

Duet with Guest: Cher and Tina Turner sing "Shame Shame Shame" (Video)
(cover of Shirley & Company, 1974)
I call these their button-dresses because they remind me of sewing store buttons on strips of material. Tina's dress is blue; Cher's is mostly pink with some blue accents. Cher seems out of breath at times and the dresses are creating flare storms. The song highlights the girl-power to be found on the show. Mid-1970s feminism, Cher's anyway, was more than just how women were relating to men but how women were relating to other women. At the end Cher looks up with relief that its over. She has always said keeping up with Tina Turner was a hard business to be in.

Guest Spot: Kate Smith sings "What Kind of Fool Am I"

Skit: Cher and Tim Conway play bickering servants ruining a wealthy dinner party. The dinner party hosts and guests are all unknown actors listed by the announcer in the end credits but I didn't catch any of their names. Nobody sounded familiar. Cher is in a French maid outfit. Conway is in a butler's outfit. He calls Cher Pocahontas and big-mouth. The rich people try to talk about golf while Cher and Conway make a mess of their dinner.

Finale: (VH1 Video)
The entire cast sings in this pretty long tribute to the Beatles. The backdrop is an elaborate colorful rainbow affair reminiscent of the Sgt Pepper's Lonely Hearts Club Band album. In fact the Ike and Tina Revue will be dressed in St. Pepper's costumes. Another part of the backdrop is the Revolver cover drawings of the Beatles. Although a highly odd lineup, this is one of the best musical segments of the show and proof that unusual combinations produce fun results. Cher wears a silver fringe halter dress with big hoop earrings. Tina wears a silver dress. Kate wears a white dress with feathered arm sleeves. According to Cher, Kate had never used that kind of microphone before and she was really twirling it every which way.

I love this thing. It was unbelievable to see the first time. Full audio with all the songs.

Close: Chastity joins in a yellow apple and worm t-shirt. "Hey Jude" is continued as the credits roll.

VH1 was a half-hour show and is missing the Kate Smith Relationship skits, Cher's introduction to "Nutbush City Limits," Kate's solo, Cher and Tim Conway's servant skit and parts of the finale, including half of "Help," Cher's "Here Comes the Sun," "Let It Be," and "Eleanor Rigby."

The TimeLife Cher is missing Kate Smith's solo and most of the Beatle medley including "With a Little Help From My Friends," "All You Need Is Love," "Day Tripper," "Yellow Submarine" and "When I'm Sixty-Four," "Here Comes the Sun," and "We Can Work It Out."

Highlights: All those moments of girl-power. Sexual assertiveness in the Bride of Frankenstein skit. The Beatle Medley showcase of uncategorizably genius guest medleys.