The title credits show Art Garfunkel (or Art Garfinkel, as my mother says) in a bowtie and suit with big hair, Charo with boobs and big hair and McLean Stevenson (I always liked that guy) and include video out-takes of Cher as a Minnie Mouse knock-off and in her red opening-song dress and dressed like Chaplin's tramp.

Torch Open/Opening Song: "Where You Lead, I Will Follow" (Video)
Cover of Carole King (1971)
Cher wears a red cape with a dramatic collar. A flame on the chest sticks out. She drops the cape and we see a slender red dress cut out with an over-the-shoulder breast-drop. The cape falls on the stage instead of behind it. You can see the lines of the nude mesh holding the dress together if you look for it. An architectural feat for Bob Mackie. We see side-boob and this is early example of jiggle TV (No, Charlies Angels didn't invent that). Cher claps loudly through her performance. The curtain is a thick tinsel. Sonny & Cher sang this song on their last live tour. Cher does a big hair flip at the end and an upside-down hair flip. 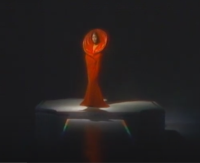 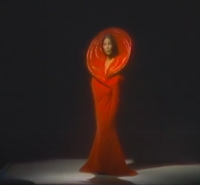 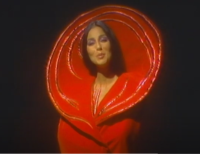 Monologue: "I feel terrific" Cher says. She says she likes doing the show (she gets to "dress up strange and be funny and make people laugh") but she doesn't like the 7 a.m. rehearsal time. Maybe this monologue was taken from real life because Cher seems oddly absent from parts of this episode. She says she loves to sleep and would do the whole show from her bed if she could, but CBS didn't like that idea. She says she's so uptight about getting up early, it keeps her up all night. She does a very bad, long joke about an alarm clock with a cassette tape and escalating alarms that go off. She talks about how bad she looks in the morning and jokes about the audience waking up with her (a joke about her alleged promiscuity) and then decides to be selective. She looks very tan and does a Charo impersonation and talks about her "good friend of mine and the best composer in the world, Mr. Jimmy Webb." She introduces McLean Stevenson as having just left the show M.A.S.H. and how his character is missing in action.

Skit: Gooney Tunes Presents Mouse Jealousy, a knock-off of Mickey and Minnie Mouse where Cher and McLean, in yellow and white outfits, play two married mouses visiting El Mouse Trap Cafe with a box of matches for a stage and thread-spools for tables. All the mice are dancing. Cher, in a high mouse voice, is worried about McLean's philandering. Charo in green plays a waitress tempting McLean. He sees her and says "Jeesz!, I mean cheese!" McLean and Cher both re-enact Charo's hoochie-coochie routine. Cher accuses him of cheating on her with a racoon, a squirrel, a beaver and Annette Funicello. McLean says he's never claimed to be a church mouse. Cher says she admires his mousetach and mouseles but Charo comes by and McLean can't resist. They make hoochie-coochie in front of Cher, who then comes at him with a hammer, hits him with a THWACK and flattens him into a cardboard cutout.

Guest Spot: Art Garfunkel whispering "Bridge Over Trouble Water" (Video)
Cher introduces him wearing a black dress and long hair and talks about wanting to have good music on the show from people who are not normally on TV. Garfunkel stands very weirdly to sing the song, hips out! It's unfortunate that he follows the mouse skit because it reminds us he looks like a mouse. The set is a muted jungle scene which is not helping anything in that regard.

Skit: McClean and another actor are commanders in this World War II skit who both inaudibly and illegibly explain to the troops their targets on a map. The words "sudden death" are the only understandable things said. The troops are understandably confused and ask for clarification that never comes. This skit isn't listed on the TV.com list for this episode. And it's an all-guy skit which lacks for want of some Cher.

Solo: Cher sings "You Are So Beautiful" (Video)
Cover of Joe Cocker (originally Billy Preston) (1974)
Cher wears a white nightgown. Chastity is in pink PJs and rocking on a big horse. Cher sings to Chastity, who smiles and does a raised eyebrow once in a while, a bit of show-biz self-awareness that always made Chastity seem like a much older soul. Cher picks up Chastity and they move to the bed where Cher brushes Chastity's hair. Cher sings the full lyrics to the song and really belts it out at the end. Cher walks out of the room at the end. This is a great little performance between the two of them. Absolutely lovely.

Skit: McClean Stevenson is at a dinner party having stock-broker conversations with people there. He invokes his broker, E.F. Sutton (a spoof on E.F. Hutton commercials) and instead of everybody listening, everybody runs out the door. McLean does some mugging with champagne. A one-joke skit. Not in the TV.com list.

Skit: Cher comes singing down a swanky hallway in a white gauzy dress singing the first lines of "My Way" (Cover of Frank Sinatra, 1969) and when she gets to "the final curtain" part of the lyric a white curtain envelops her and she protests.

They sing from inside the big C ramp with Webb on piano, Art and Cher singing from behind the piano. Cher is in a silver dress and big curly wig. Cher and Art argue about who likes Jimmy Webb more. Cher says she just spent three months working on an album with him (he produced the fan favorite Stars just released a month earlier in April). Jimmy Webb never looks up while he plays. I've given this three stars. I'm not a big fan of Art Garfunkel but he and Cher sound surprisingly great together.

Guest Spot: McClean and Charo do a version of the "Girls" song, Charo sings her part in Spanish.

- Cher as a Tramp-like hobo who tries various cons on McLean while Chastity, dressed as a hobo too, tries to warn him not to fall for them. "It's under water," Chastity says of one scheme. Cher says, "beat it kid." At the end of a few attempts, McLean gives Chastity a ten dollar bill for being honest. Turns out that was the scam.

- Sylvia and Larry: Cher, wearing an orange dress and hat, is McLean's hard-luck girlfriend and he's trying to break up with her. She collapses a chair, sits on a fork, dumps sugar (which turns out to be grated cheese) into her coffee, a rainstorm pours only on her and then a windstorm, a bank safe falls on top of her. McLean gives her his phone number (in case her luck ever changes) and she accidentally burns it up on the table candle. Poor kid.

Charo introduces Cher as her "shy and innocent" kid sister Juanita who doesn't speak good English. They banter, Cher with a Puerto Rican accent to match Charo's. Cher also wears a black halter version of Charo's halter dress. Cher wants to shake her maracas but Charo tells her she has no maracas to shake (boob joke). Cher gives a great big raspberry.

The skit cuts to their song-and-dance. Now in pink and orange fringe dresses (or red and orange depending upon the video quality), they sing and dance to the song "America" from West Side Story (1957). They're both wearing big hoop earrings. The stage looks kinda cheap. There are four male dancers in white suits. Cher is singing in her Puerto Rican accent.

This is a good example of the Cher effect. You can see Cher is by far not as clean of a dancer as Charo is (who sings, dances, plays guitar, does hoochie coochie, has bigger boobs, is obviously multi-talented) and yet Cher pulls focus the whole time, even without any maracas. For all her high NRG, Charo does not have the "it factor." When the song ends they laugh and smile and each other and bump hips.

Close: Cher closes from the "America" stage and tells us to "stay cool." Charo comes back with the dancers and they dance us off. McLean comes out in a white suit and mugs it up. The announcer says, "Also appearing, a lot of other people and some mice."

VH1 was a half-hour show and is missing the military and stock broker skits, the Girls skits, "Galveston" from the Art Garfunkel/Jimmy Webb medley, Charo's performance of "Malagueña," Cher's solo and Cher and Charo chatting as sisters.

The TimeLife Cher is missing Charo's performance of "Malagueña"

TV.com's ordering seems off as some of the Girls' skits are all over the list and many of the small skits are missing. "Galveston" is also not listed in the medley.

Highlights: Art Garfunkel and Cher singing together, surprisingly pleasing. There is a lot of Cher missing from this episode, including prominently from her Girls skit. Did she not show up to work for a few days that week? The red Mackie dress is a feat of engineering.