The title credits show Dennis Weaver in a suit and a stache, Gregg Allman is some kind of facefur, Carol Burnett doing a slight bit of mugging. The montage also shows Cher in her bun-of-buns wig with its tilted tiara and Cher as a toddler.

Torch Open/Opening Song: "For Once in My Life" (Video)
Cover of Stevie Wonder (1968)
Cher wears a simple white-fringe wrap (Man, the 70s and fringe. Am I right? Just wait til the macrame makes an appearance later in the episode.) She throws it off to reveal a white, shimmery mermaid corset dress. She sings with conviction. The curtain is a shimmery translucent material with a white ruffle at the bottom. Was this some guy's job to reinvent this curtain every week? Cher does a big hair flip at the end. 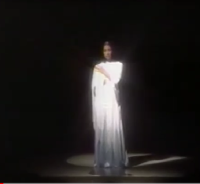 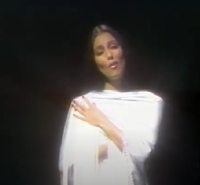 I have always believed Cher re-purposed this dress for her wedding dress at their later June 30, 1975 hotel wedding (their divorce was finalized on January 16, 1979). There are no wedding pictures (that we know of) from Sonny & Cher's marriage because it was initially a private bathroom to-do with Sunset Strip store rings, followed by a legal formality years later.

It's possible they are just two very similar dresses. Also pictured are her bff (and former personal assistant) Paulette (right) and her sister Georganne (left). 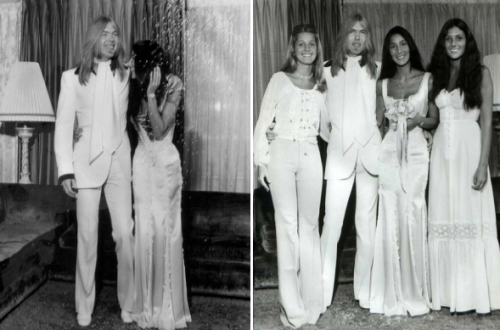 Monologue: "You guys are super fine," Cher says. She gets a cat call when she says she asks if she's laced properly. She says her dressing room tonight is busier than Warren Beatty's beauty parlor (joke referencing the movie Shampoo). She says she would like to get dressed without being watched by the entire Mormon Tabernacle Choir is there. This seems like one of the earliest references to this institution but Cher would refer to them often in interviews, as in everyone thinks I'm dating the whole Mormon Tabernacle Choir. It would be interesting to know why they were singled-out as rumored mass paramours of Cher. Cher says her secretary (Paulette) is there, her makeup man (Ben Nye III), her hairdresser (Rena), her mom, her sister, her producer (George Schlatter), two writers, a family of four left over from the CBS tour... She says she's been completely made-over by these gang of helpers. That without them she's really a ten-year old boy. She looks down at her boobs and says "come to think of it they didn't do such a hot job."

She says this will be a "dynamite show" and introduces Dennis Weaver and says he has a TV series and an album. She calls Gregg Allman "a singer, composer and a pretty good friend" (I'll say.) And then she introduces Carol Burnett as incredible and says she has "more respect for her than anyone on television." She tells us to "stay cool, sit back and relax."

Skit: The 24,663.89 Pyramid (Video)
Dennis Weaver plays the host Bob Burbank (which sounds like a play on all gameshow host names) in this spoof of $25,000 Pyramid. Carol Burnett is the contestant named Sharon who is on a winning streak. She pretends she doesn't care about all money she is set to win ("shaw on the money," she says.) She indicates she will use it for her husband's church. She thinks her celebrity helper will be the smart-seeming star of The Bob Newhart Show (also on CBS), Suzanne Pleshette. But instead she gets Felicia Star, a big-boobed, blonde bombshell played by Cher. Star is called the Queen of Cancellations and the host calls her "incredibly ungifted." Sharon is dismayed and asks if she can't have Charo instead (Ouch! Charo was just a guest last week!)  The categories are Polynesian Detective Fiction, Things Around the House, Famous Misprints, Rocks of Ages, Shops of the Acropolis and Condemned Men's Last Meals. Afraid for her fortune, Sharon picks Things Around the House.

The clues are a clothes pin, a vacuum cleaner, a bar of soap and bed. Star thwarts every round either giving or getting clues but Sharon barely ekes out a win after trying to choke Star and is then disqualified for attacking Star so she turns on Bob Burbank.

Duet with Guest: Cher and Gregg Allman sing "Don't Mess Up a Good Thing" (Video)
Cover of Bobby McClure and Fontella Bass (1965), also Gregg Allman (1973)
From her big C-ramp stage, Cher introduces Allman saying he's really terrific, "a special member of the rock music scene" and "a really good friend of mine." Cher seems very happy. The band and the backup singers are wearing Cher logo shirts. Cher is in her triangular afro-wig with a blue and black cap to match her halter outfit in a space-suit theme, which also matches Allmans outfit. You can't help but be reminded of Sonny here, unfortunately, especially Cher's comment that he would let her dress him in anything. This doesn't seem to work with Allman, who doesn't wear ridiculous very well. And it's always worth remembering they were having good sex right about now, (my notes actually say "good sex"), because Allman and Cher don't have very good chemistry on camera. They may have had more inter-personal chemistry than Sonny and Cher had, but they don't pop on camera. In fact, it’s a kind of awkward brand confusion for them both. Note Gregg's turquoise ring on the keyboard closeups, possibly a gift from Cher from her allegedly great collection.

Skit (Video, 22:59)
Carol Burnett comes out impersonating Cher in a red cut-out dress that looks very similar to one Cher once wore. She also wears big silver hoop earrings and makes fun of Cher's jive talking, telling us to "be cool, stay loose, mellow out" and "I'll be back in a far-out minute." She does a big front hair flip and a few side hair flips, get's hair stuck on her lipstick. She shows off the back of the dress with an ass wiggle. Then Cher comes out squeaking like Carol Burnett during her opening monologues, complete with her backwards walk, complete with an autograph book and pleas to start a Q and A with the audience and a pull on her ear (which was Carol Burnett's signal to her grandmother at home). She says things like "golly" and "gosh."

Saturday Night (Video, 25:13)
Cher comes back from a costume party dressed as Marie Antoinette. We see the outside of her apartment and her struggles to get her skirt hoops through the door.  The dress is pretty fabulous.  The room looks a bit redecorated. Was there pink wallpaper in the living room before? Her date was a Knight and she had to keep Ben Gay-ing his hinges. Taking off the wig messes up her hair. She makes a decapitation joke (as you do in these situations). She said she went to the party with a Robin Hood and Maid Marion but Robin left with Friar Tuck (interestingly no ridicule or judgment is placed on that, Marion left with someone else too). She takes off her beauty spot, which she says is a convenient way to hide a pimple. She steps out of the dress and the dress stays standing up. She goes into the kitchenette and tries to eat ice cream but it's too hard. She tries out her new microwave and it burns the ice cream tub. She said she had wanted to go as Napoleon and Josephine but "that yo-yo never said 'not tonight' to nobody." She gets into baby blue jammies and says how nice it is to go natural, "away from the tinsel and glamour of Hollywood." She then puts on a glittery-glamourous sleep mask and goes to sleep. Above her bed, the cover of Cher's new album Stars appears.

Solo: Cher lip syncs "Geronimo's Cadillac" (Video)
From her Stars album just released; cover of Michael Martin Murphy (1972)
The backdrop is her album cover and a purple sparkly mesh material that looks like a disco shower curtain but it twinkles and is pretty awesome. Cher wears her disco-Indian outfit later famously seen on the cover of  Circus magazine in 1979. She walks along a Wizard-of-Oz like blue road. 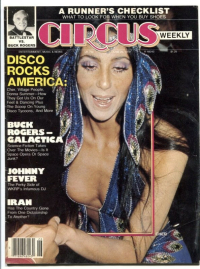 Guest spot: Gregg Allman sings "Midnight Rider" (Video)
Cher does a voice-over introduction where she slowly enunciates "Gregg Allman" with great gravitas. Allman's singing with a guitar is intercut with Cher and four dancers singing around huge hanging macrame installations that look like faces screaming in horror. Is it me?

Skit: Shirley Holmes and Dr. Wanda (Video, 38:01)
In this Sherlock Holmes spoof, Dennis Weaver plays a barrister reporting a double murder to Scotland Yard. Shirley Holmes (Cher) and Dr. Wanda (Carol Burnett). They bicker between each other. Dr. Watson makes a small boobs joke and a nose joke. Cher smokes a pipe. Dennis Weaver agrees to re-enact the murders of his wife and secretary. Holmes plays the wife (whom he showers with kisses) and Wanda plays the secretary (whom he keeps slapping). Cher seems to miss Weavers mouth every time he goes into to kiss her. Wanda insists they trade roles and Weaver commences to kiss his secretary. There is a lot of slapping, until finally Cher and Carol's teeth fall out (hilarious). Things devolve into a huge girl fight (with Cher laughing through it). Turns out Dennis Weaver will push them both out of his office window, just like he did with his wife and secretary.

Finale (Video, 46:51)
Cher and Carol Burnett perform the musical life story of two feuding silver screen ladies who are at each other's throats from when they were child stars together to the 1920s and then to World War II and finally in glamourous Hollywood signified by red-carpet stairs. Cher and Carol in black and silver dresses and bobbed hair introduce the plot and fictional characters, Lily Lamont and Vera Duvine (although at one point it seems Burnett is singing Levine) with an original song.

Close (Video, 57:04)
The scene continues with the Hollywood glamour. Dennis Weaver and Gregg Allman join in white suits. She kisses Carol and Dennis and gives Gregg a big hug.  They all dance, first Cher with Gregg and Carol with Dennis. Then Cher dances with Carol.

VHI is a half hour show and so is missing the Dennis Weaver solo spot, the Shirley Holmes/Dr. Wanda skit, the 24,663.89 Pyramid skit, Saturday Night and some songs from the finale.

Timelife is missing both Dennis Weaver and Cher's solo spots.

The order above is from TV.com since all the re-airings were scrambled.

Highlights: Most likely one of Cher's favorite episodes because it has Gregg Allman in it. I always love when they mash up jazz and big band standards with contemporary songs like a deep cut from a Randy Newman album.