The title credits show goofy, sexy and serious in the Hudson Brothers, Teri Garr and Art Carney (who has just won an Academy Award for his role in 1974's Harry and Tonto). Outtakes in the opening montage include Cher in a green dress, Cher in a snowstorm and Cher rolling one of the show cameras while she's dressed in a blue robe.

Torch Open/Opening Song: "Great Balls of Fire" (Video)
Cover of Jerry Lee Lewis (1957)
Cher starts in a white dress with a sheer wrap with colored beading. She throws off the wrap to show a dress very similar to the one she wore to the 1974 Grammy Awards, a butterfly halter-top and ruffled mermaid skirt. The stage curtain is a matching sheer material with fringe ends. Her version of the song is not bad.

Cher was identifying with the butterfly at the time as a symbol for her new post-Sonny life. 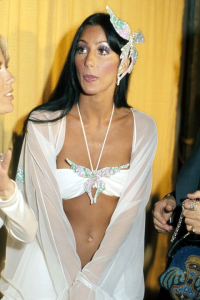 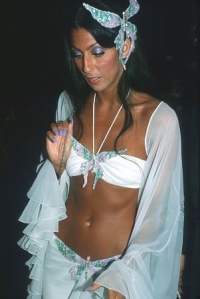 She plays a very interesting question-and-answer video of un-aired audience questions she fielded over the first season. Questions were about her weight (103, 104, 105, 106), her measurements (31, 20, 34 she guesses after calling backstage for Bob Mackie to weigh in) her boobs and if her belly button is insured. She tells us she has a small head and is skinny. She also says she doesn't "get around as much as you think." She's still dating Gregg Allman in one answer. She's not dating anybody in another answer. She doesn't know Elvis so hasn't split up with him. She claims she's "going with" the Mormon Tabernacle Choir. She says she likes all men: tall, short, skinny (not fat). And after this disclosure, a horde of men from the audience comes up on the stage and she laughs. She lists off her three dogs. She says she doesn't gamble or drink and drives a turquoise Ferrari. She says she hasn't met Barbra Streisand and when asked Streisand said she didn't want to meet Cher. (They would later see each other often and become friends taking Jane Fonda's LA aerobics classes).

This is the last episode of the first season and Cher tells us she has been "picked up." She says if she sees her face on the cover of another magazine she will throw up. (In 1975 she was allegedly the most photographed woman in the world.) She brings her mom and sister onstage. Someone asks her what her father is doing now (sadly, he might have been giving her a lot of aggrivation about this time).

She is asked if Sonny will be a guest on the show soon. She says she knows him by "El Primo" and not Sonny and she hopes to have him on the first show of the next season (he never was a guest on the show). Some guy asks her if he could be a replacement for Sonny and she says, "nobody could be a replacement for Sonny. Take it from me."

Carol Burnett stands up from the audience and asks Cher where she has ripped-off the idea for a Q&A segment and was it from her show. Cher denies stealing from Burnett's show and tugs at her ear.

Life with Laverne: Cher is sitting on a coach in her apartment reading about Cher in Television Stars magazine. I took a screenshot of this because it's the kind of meta-moments I love on these shows. Olivia knocks on the door. She's wearing a pink, waitress outfit and her hair is in rollers. She's sobbing and upset about her husband Bert. Cher asks if Bert is seeing another woman? another man? another couple? Olivia says Bert has informed her she is a lousy cook and that her food tastes like hockey pucks. Laverne says Harry thinks she's a lousy cook too but she doesn't care because he's a lousy cook as well. Laverne suggests Olivia serve Bert dinners with the lights turned off. Laverne says, "cooking for a man is like fishing at night. If you use the right bait, he'll swallow anything." She also suggests dressing up and putting Brute cologne behind her ears and then dinner won't matter. 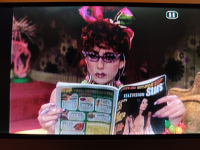 Duet with Guest: Cher and Art Carney sing "My Blue Heaven"
From the Ziegfeld Follies (1927)
I wish this was online because it's lovely. Cher wears a 1920s wig and purple and black top with black pants. Art Carney plays the piano. He starts with Frédéric Chopin's Prelude in C Minor (the same one Barry Manilow uses in "Could It Be Magic"). Cher gave me a chill with her falsetto performance. She's very playful with Carney, who does a kind of Louis Armstrong big-band style routine interspersed with his comedic mugging. After the song ends, he gets a kiss.

Skit: Cher is dressed as a buxom airline stewardess in a yellow dress named Julia. She says that the airline intends to reduce fairs by cutting out frills...like coffee cups for coffee, restrooms, seatbelts....and seats. Also no trained pilots. Julia shows the airline logo of two 'twin peaks" with flames in between them. She says, "forget the plane and fly me!"

Skit:  Chastity arrives at a park on a bike. Carney is selling balloons. Chastity is very picky about the balloon to be purchased. Many failed attempts are made by Carney to locate the right balloon from the big bunch. He gets very disoriented trying to find it. Chastity pays for it and then uses the balloon to blow up a flat bike tire, returns the empty balloon and demands all the money back.

Skit: Art Carney tries to make Cher laugh. She tries to keep a straight face while he tells her to not smile and stares at her until she starts to laugh. It's very cute.

Skit: Flashback Theater. The Hudson Brothers play inept painters trying to put up a theater bill. They try to be madcap.

Cher Medley: Cher sings "My Sweet Lord" and "Oh, Happy Day" (Video)
Cover of George Harrison (1970) and the Edwin Hawkins Singers (1967)
The C-ramp stage is filled with the band and a choir of singers all wearing the black Cher t=shirts. Cher wears a white dress with a turban. There's lots of hand hanging and a lip-lick at the end. She really wails it out during the choruses of "Oh Happy Day" and you can see her kind of looking down and gathering her energy for them. I gave this three stars. I really like Cher's  gospel attempts, even the squeaks. At the end she seems out of breath and unsure about it all, like "I did my best."

Skit: Cher plays a white-wigged judge in this anachronistic courtroom with Carney as the prosecutor, Garr as a cute, smartly-dressed witness named Mrs. Frumpkins, and the Hudson Brothers as a bailiff, court reporter and a defense attorney. Carney and Cher conspire to trick Garr into a confession. Everyone ends up arguing with everyone else (including the studio audience) and Cher can't clear the courtroom and so God intervenes with an earthquake.

Complaint Department: Cher in her typical 1940s outfit is again thwarting customers, this time Teri Garr trying to exchange a baby shower gift because it's pink and she's had a baby boy. Hilarity does not ensue.

Finale: "Hernando's Hideaway" (Video)
From The Pajama Game musical (1954)
Cher wears an orange and fringed Spanish dress and dances with dancers in matadors suits. She has big flowers in her hair. The dancers and Cher take breaks from the Spanish dance to do 1960s go-go moves. It's an awkward dance mashup. At the end, they do a Soul Train dance train. Cher's dress is very pretty from the back. She winks at us at the end from behind saloon doors.

Close: From the same stage Cher brings out "the sensational Teri Garr, the mediocre Hudson Brothers" and Art Carney. Chastity also comes on stage and they all do another Soul Train line.

There's a (show-writer) Allan Katz joke over the credits.

Highlights: Cher singing a gospel medley of "My Sweet Lord" and "Oh, Happy Day," Cher and Art Carney singing "My Blue Heaven," the skit about the ongoing crapiness of airlines, and Art Carney making Cher laugh is very sweet.