This episode has never re-aired but thankfully the good people over at ToughPigs Muppet site have located a raw copy and created a blow-by-blow page explaining this week's show: https://toughpigs.com/cher-1/.

For season two, the title credits have dramatically changed including a much more stunning soundtrack of "All I Really Want to Do" instead of the old instrumental number. The guest star intros are now static photos.

And the Cher images are animated awesomeness.

Torch Open/Opening Song: "Where You Lead" and "How Sweet It Is (To Be Loved By You)" (Video)
Cover of Carole King (1971) and Marvin Gaye (1964) / James Taylor (1975)
Season two has also updated the opening architecture (in all senses of the word), splitting up the torch moment and the up-tempo song into two songs instead of one. The blackout background now has sequins on it. There's a cut to the closeup instead of a complete, slow pan in.

Cher wears a large blue wrap with a big pink and blue feathered collar. The stage appears right as she throws off her wrap instead of at the moment she starts to move forward. For some reason, this seems to increase the drama. And the new stage is made of gold and silver concentric circles around the blackout space. The band is now sitting in the first rows to each side of the tongue (which is still there). As Cher skips down the tongue, she's singing "How Sweet It Is" and the blackout circle has been closed by a geometric-encrusted turquoise circle. All slick improvements, much better than the Cher towers and the flimsy looking curtains.

Cher wears a purple fringy spaghetti-strap dress with a large, weird-looking cut-out on her left side showing a lot of hip bone. She's clapping loudly. There are some smooth new transitions and collages during the song that show off the band. Big falsetto end and a hair flip.

Monologue: Cher talks about her busy summer vacation. She apparently doesn't mention it but this would have been common knowledge that a little over two months ago her divorce from Sonny became final (June 26, 1975) and she married Gregg Allman days later (June 30, 1975).

Skit: A recording session with Electric Mayhem and Bill Cosby.

In this segment Cher and Electric Mayhem (it feels good just to be typing that out) are singing "(I Can't Get No) Satisfaction" (Rolling Stones, 1965). According to ToughPigs, Richard Hunt is playing Janice as he would from the second season of The Muppet Show until he died. Her valley girl voice hasn't been developed yet, however.

Bill Cosby is the producer telling them all their performances are "sub-standard," "inefficient" and "very very ppffftt." Dr. Teeth says, "in other words, you didn't like it?" Cosby retorts, "No other words, exactly those words."

Cher complains, "can we just get finished with it, man? 'Cause I've got to go" (home to Gregg Allman presumably).

Dr. Teeth is busy too. He has to drive Animal to Bakersfield.

In a bit of dialogue I can totally see Cher saying in a real recording session, "If somebody can just tell me what I'm doing wrong, I'll do it right and we can get out of here."

The band and Cosby pile on her and tell her she has no soul, no rhythm, no feeling, no cymbal (that's Animal talking). Cosby tells her she's got to feel pain, project pain and that she dosn't even know what pain is.

Cher says, "I've been working with these turkeys for the past three-and-a-half-hours. I know what pain is. Believe me!"

They all argue about what pain is. Then they try to sing the song again. Cher then says she's "had it," that her head and throat hurt and that she can't finish the record. They all decide to use what they've got to create the world's smallest record. Cher thinks this is nuts and says, "Wait a minute. You guys are weird. You're wacked out. You're a bunch of bananas." Floyd feels complimented and says to her, "Thank you, your hipness." (This could be sarcasm, though. Hard to tell.)

Cher leaves and Animal gets agitated, "Where woman go? Me want woman!"

Cosby says, "consider her like an empty bottle of Ripple. No laughs, no fun, no deposit, no return."

Janice says the record would make a nice earring. Dr. Teeth says, "show it to Animal. He's a nice judge of music." And Animal eats it, of course. 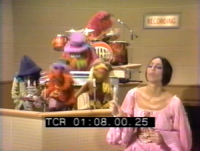 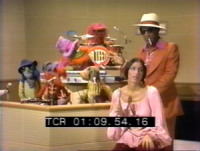 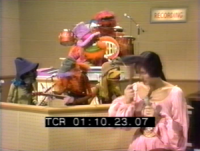 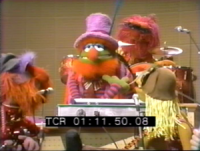 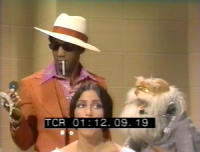 Guest Spot: Tom Smothers and Rufus the dog sing "Smoke Gets In Your Eyes." Frank Oz performs Rufus here, a Muppet not destined to last much longer in the Muppetverse, although he does make a cameo later in The Muppets Take Manhattan. Rufus howls along to the song. Tommy gets the bartender to give Rufus a drink. There are some cigarette jokes. Accidentally a puff comes up from where the puppeteers are hidden. 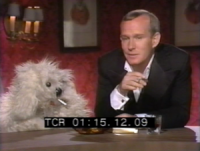 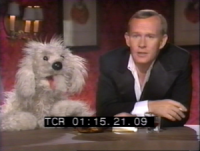 Skit: Bill Cosby plays a plastic surgeon wearing a fake nose. He's a hustler of bargain nose jobs trying to get into Cher's dressing room. The ToughPigs commentary: "That's funny because he's horribly ugly. And Cher is a beautiful woman who doesn't need plastic surgery. The lolz write themselves." (Sarcasm there surely) This skit reads undeniably meta now since the 1980s and 90s when Cher became a lightening rod for criticism about plastic surgery, surgery she did have (nose, teeth and boobs admittedly and facelifts later presumably) and plastic surgery she didn't have (ribs removed). 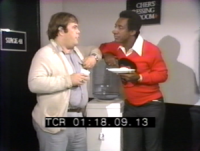 Cher Solo: "Send in the Clowns" (Video)
From A Little Night Music (1973)
Cher lays across some steps in front of a portrait of her famous Time Magazine cover of 1975 in the iconic Bob Mackie Met Show dress. She sings a heartbreaking rendition of this very beautiful and sad Steven Sondheim song about two people who can't make it work out amidst life's painful ironies. This is one of my favorite songs. Thankfully there's a Cher cover of it.

This segment introduces the concept of the two Chers. She would revisit this idea occasionally in songs and interviews to come, differentiating CHER from cher, glamour Cher vs jeans Cher. This was to be the original concept for her 1979 Prisoner album and it's a concept that is part of her Cher and Other Fantasies TV special in 1979 when Cher performs "Love and Pain."

Cher gets up and walks to the top of the steps to finish the song. The portrait turns into a shadow at the end indicating it will be the shadow of the big glamour CHER that will stand the test of time and the real Cher will be forgotten. There's no applause at the end of the segment, just silence.

Cher will take the concept even further in the 2018 Broadway Cher Show with three Chers demarking different archetypes of Cher and using three of her major looks: the frightened, innocent 1960s Cher, the more courageous and glamourous-but-tumultuous 1970s Cher (the transitional Cher), and the take-charge 1980s-and-beyond Cher. 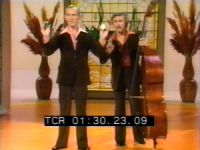 Duet with Guest:  Cher and Sweetums sing "Something"
Cover of the Beatles (1969)
This is Cher's first duet with Sweetums. She will do another one later in the season. According to ToughPigs, Sweetums hasn't been seen for a few years and is performed here by Jim Henson (said to be "creepier" and more "stand-offish" than Richard Hunt's later performances) but that in this case it works in contrast to the "beautiful and elegant Cher." Sweetums knocks over pedestals and set pieces while they sing together. 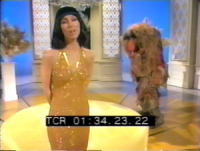 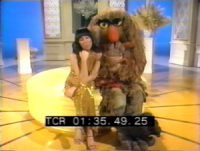 Skit: The Pain Game
Dick Smothers plays the host and Cher and Tommy Smothers are the husband-and-wife contestants. The wife answers difficult questions while the husband is tortured. Tommy is executed at the end. Yikes. ToughPigs wonders, "are you laughing yet?" Ah, no. 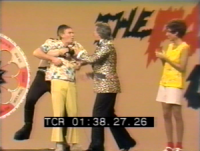 Finale: Shape-Up America
Another meta-reference to a pre-Jack-LaLanne Cher. Cher looks cute in long pigtails and a white workout outfit. She sings the original song with the Smothers Brothers and Bill Cosby (who allegedly was once a Phys. Ed. major) using balls, aerobics and other exercise equipment. ToughPigs says it feels pretty "awkward" watching Cosby and the Smothers Brothers trying to dance. The song-and-dance frames three skits. 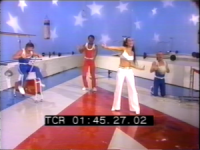 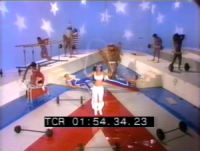 - Suburban blonde housewife Cher is working out in her living room with a TV exercise program when the Smothers Brothers try to break-in and rob the house. They are fooled by the directions in the TV show with directives like, "put your hands up." ToughPigs says the skit is thankfully brief. 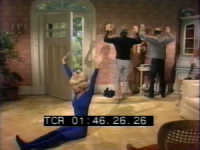 - ToughPigs says the next skit comes across as racist these days, the Smothers Brothers pretending to do karate. - Bill Cosby does another crazy doctor here who examines the monster Sweetums (now performed by Richard Hunt, maybe his first performance ever according to ToughPigs) for an annual checkup that devolves into an argument and bad jokes.

Close: Jim Henson joins the Shape-up cast as Cher says goodnight. No other Muppets join him. 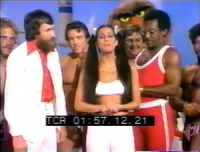 Highlights: This episode may have never re-aired due to the infamous Bill Cosby malfeasance or maybe something totally unrelated. I'm sure his involvement won't help the episode's potential re-airings in any case. The nose-job skit is very meta considering Cher's latter-day nips and tucks. Cher singing "Send in the Clowns" is quite perfect and the stage concept for that is relevant to future attempts to illustrate an onstage vs. backstage Cher. The workout stuff reminds us this is to come and this.

Thank you to ToughPigs for this behind-the-scenes background information on The Muppets.