This time the credits show the pictures of guests in between the Cher animations.

Torch Open/Opening Song: "Yesterday" and "Crocodile Rock" (Video, 1:10)
Cover of the Beatles (1965) and Elton John (1972)
Cher wears a a purple cape which she throws off to reveal a sari-inspired dress which is really a pink tube top bikini. The set is pink and purple this week and the circular embellishments are different with white scallops. The close-up reveals a very bored tambourine man. Lots of loud claps. She dramatizes "long nights cryin' by the record machine" and does a big hair flip. 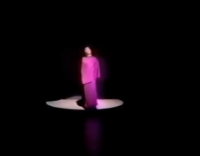 Monologue: Cher talks about her annual checkup with her doctor. She talks about having to pay 150 bucks for taking her clothes off and she thought it should be the other way around. She says he charged $20 for a chest x-ray. She says he could have done hers for $10. She announces she weighs 103 pounds and thus he charged her $1.65 per pound. She says she's a bargain at that price. She says, "Don't play doctor until we're finished with the show, okay?"

She fans herself off at the end due to the heat. Some of those musicians have a good vantage point now, looking right up at Cher.

Life with Laverne (Video, 6:20)
Ed Asner plays a moving man helping Laverne move into a new, from-the-looks-of-it cheaper place. He makes a small boob joke and degrades her looks. She says he's sexy when he acts obnoxious and he says she's obnoxious when she acts sexy. The wallpaper is as loud as her outfit. She talks a lot about Harry and makes a lot of sexual advances to which the moving man responds with horror or dismay. She gives him a pathetic tip before he leaves.  She uses the moving boxes as bongos as she sings "Day-O (The Banana Boat Song)" (Jamaican folk song, Harry Belafonte, 1956).

Skit (Video, 11:12)
A now shaved-headed Redd Foxx tries to mail a raw mackerel to Bolivia. Pat Morita plays the postal worker. It's too expensive at $44 and so Redd says it would be cheaper to send it by bus and llama. Pat laughs and says that would take six months.

(This reminds of the time my grandfather tried to send me canned tuna from Oregon to Yonkers and it took too long and he complained that (a) even the old Pony Express would have been faster and (b) did I know that in England they shipped everything in pneumatic tubes? Oy vey. The tuna finally made it and was delicious.)

Redd says the fish would be a little raunchy by six months. Redd says his cousin can't eat the tamales and chile rellanos there so he needs the fish. Pat says the food must be wrapped properly to mail. Finally Pat agrees to mail it and asks if the party's name is spelled correctly. Redd checks the Wanted posters on the wall to verify his cousin's name. Pat stamps it and throws it with the other mail and we can hear cat finding it and eating it.

Guest Spot (Video, 15:54)
Cher with her hair in a bun and a ruffled pink jacket is trying to introduce The Pointer Sisters when the new regular Gaylord Sartain interrupts her. She calls him Otis and he asks for two nickels for a dime. Cher says she doesn't even have pockets. Otis says he loves the design of her dress and that it really "flows." She compliments his false teeth. He compliments her crooked teeth and says they are sexy. Cher then tells him she's going to make his teeth crooked if he doesn't get outa there. She then introduces The Pointer Sisters who do their recent single, "Becha Got a Chick on the Side."

Skit (Video, 20:17)
Redd Foxx is a werewolf trying to check into the Kalifornia Kennels for $9 a night. He says when the moon is full he gets ugly, uglier than Howard Cosell. Cher, as a blonde, says that's impossible. Foxx makes Cher laugh by saying when the moon is full he can rip up more ribs than Colonel Sanders. They talk about breaking into Lena Horne's house and Foxx says it was to "play with a ball and chase a pussy-cat." Cher says it's a good thing he didn't break into Gladys Knight's house and bite her Pips. He says he did that last month. Now Gladys is down to one Pip. Turns out she's a werewolf too. Foxx says, "Right on, foxy mama!" and they both howl.

Skit (Video, 23:23)
Redd Foxx and The Pointer Sisters are a grieving family at a funeral and Ed Asner is the funeral director at Slumber Haven who has placed the wrong body in their family coffin, a white man with the same name Calvin P. Jackson. The funeral costs five thousand dollars. Asner reads the eulogy where we learn the mystery corpse is a rich billionaire and the family changes their mind about complaining. There are a lot of jokes about skin color and the differences between the Russian dead man and their black family and a funny cross-dressing joke.

Cher Solo: "Love Song" (Video, 28:09)
Cover of Elton John (1970)
Cher, in a white dress dances, and a dancer named Scott Salman who looks like a cross between Hugh Jackman and David Bernie do some simple dance moves around a gazebo. When Cher sings, they show her in a blurry-framed oval. Cher's not wearing much makeup. She does some dramatic hair flips. I love this song.

Skit (Video, 32:27)
Cher and Ed Asner discuss his love for her. Cher is in a yellow dress with 1920s-style hair. Asner says his three favorite comedy shows are her show, his show and Let's Make a Deal. They wonder how a show like that got green-lit in the first place, which transitions into a skit about pitching the show. Ed Asner approaches a TV executive played by Cher with a new idea for a game show. It sounds pretty far-fetched when Asner pitches it. The TV exec thinks he's crazy and buzzes her secretary (also named Paulette just like Cher's personal secretary at the time) to contact security. Ed Asner is pretty funny explaining Let's Make a Deal. Cher claims the show has no social redeeming value and as he leaves she tells him he has a better chance pitching a show about a flying nun.

Skit (Video, 38:57)
This is a very similar joke to his Savings and Loan joke from Redd Foxx’s last appearance. Foxx says he lost all his money and can't support those who need him. The camera pulls back and the joke is that he’s the U.S. Secretary of State. He absconds with all the money in his desk drawer.

Finale (Video, 39:41)
Cher and The Pointer Sisters sing a tribute to Elton John.

Close (Video, 50:30)
Cher says goodnight and they sing "Goodbye Yellow Brick Road" (1973) with The Pointer Sisters. We still see the swirling silver Cher logo but only at the end of the credits now. Not at the beginning of the show.

VHI is only a half-hour show and is missing Life with Laverne, the Pointer Sisters' song, the post office and kennel Redd Foxx skits. "Rocket Man" and "Daniel" are also cut from the finale.

Highlights: The Elton John tribute with The Pointer Sisters and the "Love Song" song (if not the dance). Redd Foxx is always a boon to the show. He carries every skit he's in.