The opening photographs of the guests all appear in between the first few Cher graphics. The Hudson Brothers are holding Chastity. Mr. Cher Scholar says the new opening is much more modern. I think it also presents Cher as very empowered, like a fantastical supercool superhero.

Torch Open/Opening Song: "Can You Tell Me How to Get to Sesame Street" (Video)
from the TV show Sesame Street (1969)
Cher starts off in a ridiculous-looking triangle of peach and white ruffles. She throws that off to reveal a polka-dotteded jumper with orange, pink and brown dots and an orange t-shirt. Her hair is in pigtails with orange ribbons (I have a soft spot for Cher in pigtails.) She wears simple stud earrings. She sings the long-form version of the song (which I didn't even know). The stage is a yellow circle this week with white, paper-looking flowers. Not only are the band on-stage now, they have to all be dressed to suit the weekly look.

Monologue: Someone yells out "where's your body, Cher?" referring to all the skin that's not showing this week. But Cher jokingly (and a bit uncomfortably) takes it as a comment on her lack of a figure. She responds, "there's not much of it" and jokes about wanting to return backstage and change clothes. She says this week's show is dedicated to kids both big and small (to placate CBS family hour I wonder?) and she says she asked Chastity to pick all the guests this week. Unfortunately, Santa Claus, the Easter Bunny and the Tooth Fairy were all unavailable or out-of-town that week or in the Tooth Fairy's case already doing a "gig in Vegas."

Cher brings out the episode's "talent coordinator" Chastity who is wearing an orange jumper, white t-shirt, and blonde pigtails. Cher says, "Help your old mother out" and Chastity does some magic tricks learned from guest illusionist Mark Wilson, some tricks Chastity came up with, and  one that "Linda" taught Chastity (is that her nanny?).

Chastity makes a pencil disappear and pulls one of Cher's makeup sponges from behind Cher's ear.  Cher ties Chastity's shoes while Chastity ad-libs "something tells me we're not doing this thing that good" and everyone laughs and claps. Cher and Chastity then sing "I'll Do Anything For You" (from the musical Oliver!, 1960). They're like two kids. It's very cute. As Cher sings the Sesame Street song again, Chastity tap dances and then Cher picks Chastity up at the end.

Guest Spot: Mark Wilson, billed as the "World's Greatest Illusionist," introduces his song Greg, "the world's second greatest," and they do a rope trick and a dollhouse trick (with four assistants!). Cher and Chastity pop out of the dollhouses in white jumpsuits with flower decals down the front. Cher wears a short, curly black wig. Wilson and his son do card and coin tricks. You can't hear what Greg is saying when he describes the tricks. Wilson does a blue thimble trick. You can see nipples through Cher's pantsuit. If, like me, you're wondering who this guy is: Mark Wilson is credited as being the first major television magician. In 1975 he had just published Mark Wilson's Complete Course In Magic which is still in publication.

Skit: Captain Kangaroo's Animals: Captain Kangaroo shows Chastity and Cher, (dressed in matching blue jeans and blue plaid shirts tied up into halters), one of his animals, the “stupid-dillo” played collectively by The Hudson Brothers. Kangaroo tells Cher he gets about 20-30 million viewers each episode and Chastity says a favorite part of the show is the animals. The Hudson Brothers are in a shared green suit with scales and horns. The set is a barn with hay. They get all of Captain Kangaroo's show schtick wrong. Cher does her big crane laugh after flubbing a line. The Hudson Brothers chase Cher and Chastity and catch Chastity. My notes next to this skit lament the fact that these brothers just don't have "it."

Guest Spot: The Hudson Brothers sing "Lonely School Year"
They're too old for this song. It's creepy.

Saturday Night: The clock says five to 9 pm this time. Cher wears a yellow Chinese cheongsam blouse with black shirt and pants underneath. She says she was 45 minutes late and her date didn't wait for her (I wouldn't). She sits on the couch and takes off her shoes. She says she ran into a man wearing a raincoat but it wasn't raining. She thought he was going to flash her but it was just an ugly plaid suit underneath. She introduces us to her dog, a big Benji looking guy. She can't get the dog off her bed. He sneezes and Cher ad libs. His name is Yutz. She calls the breeder because she wanted an attack dog but they tell her he's a conscientious objector. They tell her he's a bird dog. She pretends to be a robber and whips open her fancy closet as if to find something to steal. The dog can't be bothered. She gets ready for bed wearing a white flowered nightgown. She makes a Rhoda joke. She says her nightgown is like Carleton the Doorman, no one has had a chance to see it yet. The dog won't make room for her in the bed. She says, "Just like a man. I'm ready to go to sleep and you're wide awake." Yutz rolls over on his back and she pets him and tells him that if the robber is cute to just "stay just as sweet as you are." (Could this be their family dog?)

Cher Solo "When You Wish Upon a Star" (Video)
From Disney's Pinocchio (1939)
A big white swan rolls out. Chastity and Cher are riding on it. Cher is wearing a long, curly wig, introducing her late-1970s look. They're both wearing blue dresses. Chastity looks zoned out. She does a lot of falsetto.

The Pitch, Part 2: Captain Kangaroo and Cher (wearing a red Chinese cheongsam blouse talk about how he pitched his children’s show to NBC. Cut to the same office where two weeks ago Ed Asner pitched Let's Make a Deal. Cher plays the same TV exec named Miss Schlosser (or something like that; the name plate keeps moving around on the desk throughout the skit). Cher has her hair in a bun and wears big, black glasses (you know, like working girls do). The show sounds ridiculous when Captain Kangaroo pitches it (just like Let's Make a Deal did with Ed Asner). Again, Cher calls Paulette to get the bodyguard Vito at the ready. She tells Captain Kangaroo to go to CBS because they'll buy anything. Captain Kangaroo's performance actually made me laugh here. I was too young for this show so I asked Mr. Cher Scholar if Captain Kangaroo was this funny on the show. He said he was. Did Mr. CS recognize all the show references? He said he did. He watched the show all the time as a kid. Huh.

Skit: The Hudson Brothers play wooden toy soldiers with Cher as their leader. There's a termite joke. Cher looks tiny in her British soldier-fit. There are Bob Hope and Barbie jokes. The Hudson Brothers do a bad Three Stooges routine. Then Cher, when the toy room’s lights go off for the night, Cher makes a night maneuvers joke and it's implied there will be sexcapades between Cher and the Hudson Brothers during the night. Oy. Not a pleasant image there.

Finale: A show within a show: Mark Hudson does more illusions. (Bad quality video)
Cher wears a gold pantsuit (this is a total pantsuit episode) with a gold headpiece and they're in front of a gold curtain. They do the woman in a box trick with Cher’s hands and feet and face sticking out box holes, the blades. There's a small boob joke. Next they put Cher in a bigger box that is disassembled into four boxes. They put her back together wrong and they have to try it again to get Cher back together. Thank god. The final trick is hypnotizing Cher and laying her on a table (Wilson then steals her bracelet for a laugh) and then levitating her and then she disappears to later reappear in a tank.

I'm getting a bad flashbacks of visiting The Magic Castle to see my old high school friend Jon Levit do sleight of hand among his peers. Mr. CS said the only reason you can put up with these old hat tricks is because of Cher: "she's just enjoyable to watch." 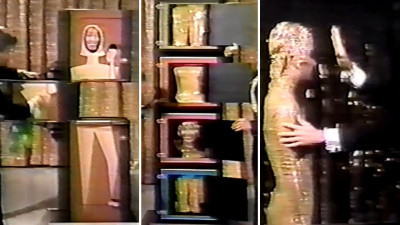 Close: Cher closes the show on the same gold-curtained stage. Mr. Cher Scholar notes that Captain Kangaroo has been given a black jacket similar to the red one he normally wears so that he can appear in black like the rest of the cast and how unusual this looks. Cher sings "All I Really Want to Do" for some reason and then thanks the guests. Mark Wilson does egg tricks for Chastity while the credits roll.

Highlights: Cher and Chastity singing "I'll Do Anything For You" is very cute. One of the more duller shows.