All the guests appear in video clips at the top. We're again using the first season's opening style of all video clips instead of the cool, new Cher graphics or the old photos. It's strange because I remember more episodes using the more recent opening.

Torch Open/Opening Song: "When Will I Be Loved" (Video)
Cover of the Everly Brothers (1960) and also Linda Ronstadt (1975)
Cher starts the torch part with a jacket of feathers that she throws off to reveal black flared pants and a tube-top, both overlayed with gold lacing. The stage is an orange circle with gold designs. Cher claps loudly as she sings. She wears big hoop earrings and jiggles a lot as she jumps up and down singing. Cher will sing a sexy version of this in the early 1980s in her Celebration at Caesars show. The studio audience sounds thin.

Monologue: Cher attempts to appease critics who have accused her of being unrefined and undignified (on her 70s TV variety show? Jeez.) You get a good look at her long nails as she makes refined chit-chat. Gone is her Cherslang grooviness. She gives herself a pie in the face (the show-biz-prop pie of whipped cream) for an ironic response to the charge of silliness. She finishes the monologue with whipped cream on her face (which is a very weird thing, both unpleasantly sexual and uncomfortably unattractive). You can hear eerie male laughing offstage. Cher turns around and saunters away toward backstage, tossing off the pie pan behind her. We don't normally see her leave the stage and there's a sense she didn't find the stunt amusing either. I find this little bit a real low point of the show, on many levels. 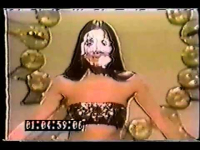 Skit (Video, 8:31)
Cher is a housewife who is addicted to TV and can only talk about commercials. Tony Randall plays her beleaguered husband. Cher wears a robe and a blonde wig. There are three TVs on the kitchen counters. Randall is getting ready to go to work and he stages an intervention because she has become a "TV nut." She can't stop talking like TV commercials: Bevlon eyeshadow, Terts breath mints (to "make your mouth kissing fresh"), Nocaff Coffee, hairspray for her "dumb and icky hair," Sure Thing antiperspirant, Nesson oil, his ring around the collar. Randall threatens her with a knuckle sandwich (yikes!) and there's a "Don't squeeze the Charmin" play on her name Charmaine, but eventually Randall just breaks up with her. No bother; she just begins torturing her lover who's been hidden in the pantry the very same way.

Guest Spot (Video)
David Bowie in a blue jacket sings "Fame." Cher does a voice over introduction, saying he's about to appear in the movie The Man Who Fell to Earth. The taped segment with lights and mirrors predicts early MTV videos. Bowie gives a salute at the end.

Saturday Night (Video, 17:37)
It's late at night (11:40 pm) and Cher is in her pink robe talking to us and her dog Tiger. She's preparing for a date and wondering if she should wear a sexy or plain dress. She doesn't know if she should appear like a woman who "knows her way around the kitchen or the bedroom." She's looking forward to cooking dinner for a "terrific, far-out hunkster" she's just met. She decides this guy likes his women "pure and innocent" and so she picks the dress for that. She then commences cooking dinner for her date and has lots of trouble. She quips that she shouldn't be following the Phyllis Diller Cookbook. She burns two roasts. Tiger won't even eat one of them (and here my VHI notes say you can hear the dog trainer here) and Cher calls Tiger "some kind of wise guy." She throws the roasts out the window. She says she can "remember when she didn't have a pot to cook in (or something like that)" which references her first hit "I Got You Babe."

She makes a bad Howard Cosell joke. Then she does an alarmingly bad job at cooking chicken soup with a full chicken, water and salt. She loses a finger nail in the soup. Oh dear. (I shouldn't talk, though, because I once had to return to the store three times in order to finish making one simple recipe of Jell-O-based party punch).

Then the phone rings. The far-out hunkster is cancelling with a lame excuse about his mother being sick. (Dude, Cher!) She tells him she's been slaving over Crêpes Suzette, pheasant under glass, Oysters Rockefeller and mocha parfait. In the back of her apartment she has a table for two (just like Mary Tyler Moore!) and Tiger gets in one chair and Cher takes the other and they share the un-cooked chicken soup. She says to Tiger, "Don't give me a hard time. I've already had a hard time."

Huh. It's informative to know this kind of male-feasance can even happen to Cher.

Cher Solo: "Song for You" (Video)
Cover of Leon Russell (1970)
Cher wears a gold and orange sari with huge hoops hanging over her ears. This beautiful set of candles again pre-dates MTV's "Wrapped Around Your Finger" by The Police.

Skit (Video)
Tony Randall plays a bank loan officer and he's on the phone telling someone their job is too uncertain for a bank loan. Turns out he's talking to President Gerald Ford. Cher arrives as a hipster trying to get a loan using her dictionary of mid-70s hipster slang to finagle one. She wears crimped hair and an Algonquian tierra, a blouse, jeans, a puka shell necklace and turquoise rings she says are from Sears.

Here is a list of things she says to confuse Tony Randall: are you the dude with the bread, hey man, bummer, bum me out, lay it on me, my old man can't get it together, spaced out, right on, now we're speaking the same language, what's your sign, let it all hang out, my old man split and I need to cover my crib, the pad where I crash, far out, every body's gotta have their own trip, get their head straight, that's really a drag.

When Cher lists her jewelry assets, Randall makes a joke about buying Manhattan with beads (Indian joke). Cher then attempts a pretty weak primal scream when her loan is denied. After she leaves, Randall finds out his own raise has been denied and he attempts his own primal scream having learned about them from Cher. End scene.

Duet with Guest (Remastered Video)
Cher and David Bowie sing a duet of "Can You Hear Me" (David Bowie, 1975).
This is actually a beautiful duet and one of my favorites from the show. Cher wears a blue flowered Asian-inspired blouse and a very short bobbed wig, inspiring us to wonder again where the f*#k her hair went. Bowie sings in a circle of blue smoke. Cher sings in a circle of pink smoke. The walk together from different parts of the soundstage and Cher puts her arm around him. Their shadows tower away from them. Good stuff.

Guest Spot (Video, 41:45)
Steve Martin announces he'll be out in a moment (funny) and starts to tune up his banjo while proclaiming his show biz professionalism. Then he sings a bit of "Ramblin Guy" and puts his famous arrow prop on his head. This was fresh stuff in 1975.

Donna Jean Brodine (Video, 44:02)
This time Donna shills the Jack-0-matic. It's a jack hammer for "anything ladies need drilling." Men are writing this stuff, right? Lamar Jo Pucket (Gaylard Sartain) comes out and they drill a milkshake. (Same question.) Sartain is not the right person for this show. He does his proto-Chris Farley type thing and Cher uses the jack hammer to remove his hangnail and together they hammer through a wall to make air conditioning. There's an attachment feature to help "clean out the walls of your oven, ladies." Oy. Send $15 to Box 10, Sucker Falls, South Dakota and you'll receive five thousand easy-to-assemble pieces. (If only they knew what IKEA was back then.)

Finale (Video)
Cher and David Bowie do their crazy medley. The band surrounds them behind big gauzy set material hanging outward from the raised circle they stand on to sing. Cher wears a red wig and billowy white pantsuit. Bowie wears a gray checkered jacket.

Now this thing is infamous. Mr. Cher Scholar calls it either a kind of drunk karaoke or two people in a stream of conscious medley. As good of an idea as anything I got. It's either delightful or horrific depending on how you're feeling on any particular day.

They laugh at the end and Bowie kisses Cher's hand. Bowie talked about his experience on the show. He says Cher had piercing eyes and a doleful expression and seemed very remote, slowly warming up to him.

Close: Without any guests Cher does a reprise of "Young Blood" and thanks Randal and Bowie but not Steve Martin.

VH1 aired the full, hour-long show. GetTV is missing the Tony Randall commercial skit and his duet with Cher.

Highlights: The weird, wacky finale of a medley with David Bowie makes Kate Smith twirling a hand mic with Tina Turner and Cher look comparatively sane. It's also probably the show's longest medley. Cher's duet with Bowie is very good. Her solo number, "Song for You," is good on this episode. Cher and Tony Randall also have chemistry (but then who doesn't Tony Randall have chemistry with?). Allegedly, this might have been David Bowie's first prime-time U.S. appearance.