Last season’s opening and music. What the.

Torch Open/Opening Song: "I Feel a Song Coming On" and “Sing” (Video)
Cover of the Jerry Vale (1964) and from Sesame Street (1973)
Cher does the torch part in a short cape of pink ruffles. There's no zoom in, but a transition effect. She throws off the cape to reveal a beautiful lace halter dress. The circle is in pink and lace. 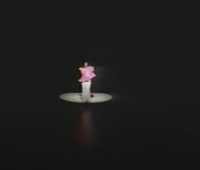 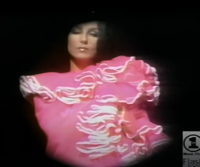 Monologue:  She calls out Jerry Lewis and he jokes that she didn't call him a "special" guest. She then introduces David Essex and Gailard Sartain (who is suddenly a guest and not a cast-member). He wants to ask her question like John Holland did weeks earlier. He asks her if it annoys here when people (does a Jerry Lewis scream in her face). He asks her if she has a Black and Decker beauty kit. He tells a baby umbilical chord joke. He asks if she would let Marty Allen use her bathroom. Does she think Walter Cronkite is wearing pants on the 6 o-clock news. There's a bit of a closeup to conseal what Lewis is doing when they start to sing. Icky.

Duet with Guest (Video)
Cher and David Essex sing “The Long and Winding Road” (Beatles, 1970)
Cher wears a laced head wrap and a fluff-trimmed white pantsuit with high white boots. He flirts with her and she does all the lip licks and hand hanging. Cher does a playful bump at the end. In my old notes, this got as star from me.

Skit: Cher and Jerry are in a cowboy movie about an Indian princess and a Jewish sheriff.

Cher Solo: "Rhinestone Cowboy" (Video)
Cover of Glen Campbell (1975)
Cher wears a sparkling silver pantsuit that throws off some great camera flares. The are neon signs behind her that say things like 'BAIL BONDS' and 'Buckaroo Club.' I love the sparkley stage, rhinestone mic and scarf, Cher's pretty eyelids, her almost perfect performance of a song seemingly made for her to sing. I loved this song at the time and it was a real treat to discover Cher's version of it years ago. Cher also looks amazing in a cowboy hat (especially this black one with a silver hat rim). Allegedly she had just discovered she was pregnant and you might be able to see a baby bump. I could not. I’ve double starred this but that's just ridiculous because this is the awsomeness of a million stars.

Skit: Allegedly Jerry Lewis wrote this sketch with Cher and Lewis doing a pantomime  about two lost souls meeting in a park. This was supposed to be really good so hopefully someday we will see it.

VHI is missing the Trashy Ladies skits, the cowboy and the pantomime sketch with Jerry Lewis.

Highlights: "Rhinestone Cowboy" and "The Long and Winding Road." Great dress for the open.