Torch Open/Opening Song: “Gotta Get You Into My Life” (Video)
Cover of Beatles (1966)
Cher wears a blue dress with a big blue and white boa which she throws off in her entrance. Her dress has one matching arm band (and if you had the Cher doll, you'll have a Proustian moment of putting little versions of Half Breed dress arm bands on your Cher doll). The curtain behind her is now what looks like gold tinsel (can they settle on a set already?). She does a big dramatic hair flip. She seems more confident now.

Monologue: Cher says hello to the Nielsen families (that used to be a thing, although in my whole early life I never met a single Nielsen family). She says CBS is like a big family and she feels like a new kid there even though she's worked there for 3 and a half years. She says she’s the only woman who has Kojak following her (at least once a week). She introduces her guests, including Jerry Lewis. He comes out and she says she's worked with him three times and she adores him and thinks he’s one of our greatest comedians.  He mugs it up below the stage while she sings. 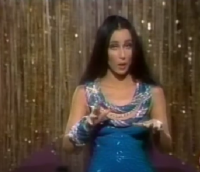 Life with Laverne (Video, 20:31)
We get to see Laverne’s trashy apartment. I’ve starred and checked this. Nancy Walker plays Laverne's mother who is also tacky and wants to borrow Laverne’s "genuine, imitation acrylic" mink coat to wear to the drag races. "Can you imagine how many acrylics that had to kill for this?" Her mother tells Laverne how nice her place is and that they could still pass for sisters. There are some weird cuts in the skit as seen from VH1. Laverne's mother loves the tacky yellow fur and calls it "Class-A-vous!" When her mother complements her marriage, Laverne says her ten-year marriage is "three of the happiest years of her life." She leaves saying, "Thanks a million for the coat kiddo." (Aww, my Dad used to call me kiddo, too).

Duet with Guest: “He Ain’t Heavy, He’s My Brother” (Audio only)
Cover of The Hollies (1970)
Cher sings while Jerry Lewis pantomimes a clown. Apparently this was very moving and listed in a bio or two as a highlight of the show. It would be nice to see it sometime.

Skit: Jerry Lewis tries to get Cher to laugh during a commercial break.

+ Jerry plays a police sergeant (sporting a unibrow) who received a tongue-twisting theft report from Cher. (Video, 5:42)  This skit is basically a review of all the infamous tongue twisters. I’ve starred it. "Then Fuzzy Wuzzy wasn't fuzzy was he?!" That always gets me. Lewis does a good job with these (no cue cards even) but the effort kills him.

+ Jerry Lewis is Scarface and Nancy is his domineering mother.

Skit: Nancy plays Sleeping Beauty and she wakes up for an interview with Cher who plays Mable the Fable Lady.

Duet with Guest (Video, 20:31)
Cher and The Osmonds do a Stevie Wonder medley with a keyboard on a swing! Cher wears an outfit to compliment the purple jumpsuit the Osmonds are wearing. Cher also is in a curly wig. She feigns a fan-freakout with each brother, culminating with Donny Osmond. I can only take these guys in small doses, but this is pretty good as guest duets go.

Closing (Video, 20:31)
Cher closes the show by thanking her guests and when she refrains from mentioning Jerry Lewis he can be heard melting down offstage. Cher says, "I'll see you next week, I hope." She dances as the credits roll.

The VH1 airing is only a half hour and so is missing The Osmond’s song, Cher’s song with Jerry’s clown pantomime, Jerry trying to get Cher to laugh skit, the second “Law and Order” Scarface sketch, Cher’s solo and the Sleeping Beauty skit.

Highlights: Solid opening number. The duet with the Osmonds is classic 1970s TV. We get to see Laverne’s natural habitat.