Title Sequence: They're tweaking the montage it seems. There's a new video of Cher practicing boob-enhancing exercises and then shrugging them off with an eye roll.

Torch Open/Opening Song: “When You're Smiling” (Video)
Cover of Seger Ellis (1928) (also Louis Armstrong, 1929)
Cher looks like a white triangle under a huge white feather hat and boa. She throws it off to reveal a white dress with a white feather trim at the bottom. The stage curtain this week looks like a negligee. This is early jiggle TV. When Cher sings "rock it to ya" she almost seems to be rolling her eyes. This is a good opening song, delicately slow at first and then the uptempo isn't too forced.

Monologue: Cher recognizes someone she knows in the crowd, someone named Rain. She seems shy still doing these intros and talks about her "Sunday evening dress." She says she won't get into heaven with it but will hopefully grab St. Peter's attention long enough to cop a plea. She calls this the 4th show (so she's not including the first "special"). She says #4 feels like a relief and that a new show is like having a baby. Show one is the exciting news from the doctor. Show two is morning sickness. Show three is feeling a kick and getting a pimple on your forehead. Show four is having regular pains, "my favorite thing" she quips. She says she's happy Teri Garr is on the show so we can see Laverne and Olivia reunited (yes, that is good).

Life with Laverne: We're back in Laverne's apartment. For the first time she's dressed differently, this time a purple outfit. Just like in the skit with her mother she begins by checking herself out in her mirror. Olivia comes over and they give a big kiss to each other. Olivia is wearing pretty much the same outfit she always wears and her hair is still up in curlers. Olivia tells Laverne her apartment is "artistic." Olivia thinks she sees a picture of a man on Laverne's wall but Laverne says that's just her peeping Tom through the window. Laverne is planning a birthday party for Harry and Olivia has brought a gift. They talk about party games and Laverne's gin cocktails and finger sandwiches which Olivia says don't look very good. Laverne says that after the gin cocktails no one will care. Turns out Harry is out of town anyway. Olivia and Laverne practice the cha-cha-cha together.

Mable Fable Lady (Video)
This is the first appearance of an interesting new character for Cher, a self-absorbed and sassy fairy godmother named Mable. Cher wears a big hooped dress and giant hat over gray curly hair.  This first episode is "the truth about Cinderella." Garr plays the leggy Cinderella and Mable is bitchy and petty beneath a sweet voice (Brené Brown could have a field day with Mable). She calls this story "a crock (of shit)." Freddie Prinze comes in as a dim Prince playing a Groucho Marx act. He's a complete dud. "No one's home," Mable says about him. Prinze was out at a party the night before and Cinderella cannot convince him she is the one who left a glass slipper on his door, the one he's scouring the land for at this moment. Cinderella eventually gives up and when Prinze leaves, Cher and Teri practice trying out their own Groucho Marx impersonations.

Skit: Cher is dressed up as a French clown. She looks tiny in a white wig and yellow, pink and white clown outfit. She reads a note on her dressing mirror and draws a tear on her face. Very enigmatic skit.

Girls with The Pointer Sisters: Just like with Tatum O'Neal, Cher sings the song "Girls" with The Pointer Sisters as a frame for breakout sketches about women. They all wear black flower-print dresses. There are only 3 sisters on this episode. Girls in this song are smarter, better at buying clothes, counting calories, spending money, indoor sports, better survivors and 9-to-fivers (you know, all the fun stuff).

- Cher in a apartment appointed with yellow furniture wears short hair and a yellow dress. Freddie Prinze (his character is named Waldo) comes home and she accuses him of being a compulsive liar. He's been out all night smoking cigars and although he's holding a cigar, he denies it. When Cher finds lipstick on his face, he calls it a birth mark. She asks him why he appears drunk and he says Martians abducted him. She tells him she knows he is sleeping with his secretary because she's hired a private eye who has taken pictures. At the end of all this she says she will forgive him if he never lies again. She goes off to make dinner and a gorilla arrives and wrecks the apartment (taking a long, boring time to do it, btw). When Cher comes back in and demands an explanation, Waldo realizes he'll never get her to believe the crazy, true story so he gives up and sees himself to the door.

- In another installment of The Complaint Department, Freddie Prinze arrives with a broken electric blanket. Cher is dressed in the same 1940s-style wig and dress and again she refuses to take his merchandise back. He speaks Spanish to her in frustration. She's sarcastic back. He asks to see the manager and it turns out now she is the manager. He takes her hand to try to sweet-talk her. She rubs his face and tells him she truly loves being mean. He tears up the blanket and rolls around in it. Eventually she makes him cry. 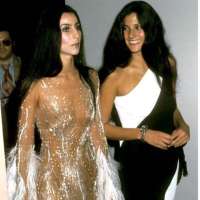 Again Cher returns at 1 am. This time she's been out on a girl's night and she wears jeans with feathers attached and a red shirt. The girls include Paulette (Cher's real-life bff and at that time personal assistant) and Renata (the wigmaker?). Cher says they all had phone calls before-hand to determine what everyone would be wearing. She says picking out a restaurant was difficult because two of the girls were on a bread diet, 2 were on a water diet (that sounds fun), and Paulette is fat (!) and eats two dinners. (Meanwhile, this is what Paulette looked like in 1975 at right). Cher talks to her plants and brushes her hair. She goes into her closet which is ridiculously tiny for someone like Cher. She says she is a "shoe freak." She goes to the kitchen and jokingly confuses the word monogamy with monopoly. She gets milk from the fridge and says a drunk macho-type guy interrupted their dinner to harass them. Cher gets into boy's PJs (although they're printed with hearts) and Cher says about them that she "didn't like the gift but kept the wrapping." She gets into bed and calls a guy she knows and shoos us away.

Cher Solo: “How Long Has This Been Going On” (Audio only)
Cover of George and Ira Gershwin from Funny Face (1927)
This is a lovely set, built to house an actual parrot and Cher dressed like a blackbird and perched like a bird on a swinging perch. The set gets three stars.

Big Finale (Video)
This is a big-band finale with Garr, Prinze and The Pointer Sisters. The sisters wear red dresses with big poofy hats. Cher wears a white dress with a glittery flower in her hair. Terri Garr wears a blue dress. They sing a medley of 1930s-40s hits:

They are not in synch much in their dancing. Garr is the only professional dancer here and even she is not trying that hard. Cher is laughing at the end.

Closing: Cher closes the show from the finale stage and they all dance through the credits.

Highlights: Good opening song. Laverne wears something different! First appearance of Mable the Fairy Lady. Cher's solo and the set for the solo.