Torch Open/Opening Song: “(You Gotta Have) Friends” (Video)
Cover of Bette Midler (1973)
Cher does the torch open in a yellow flowered fringe wrap. She throws it off to reveal a shiny yellow form-fitting dress. Behind her the curtain hangs in huge scalloped strips. They look like long papier-mâché strips and they won't lay flat. Looks kind of cheap. She crosses her fingers at the end.

Monologue: Cher shows off her nails and talks about this being a special night because she did a brave thing and gave up smoking one hour ago. She puts this up with ear piercing and shaving her legs (for bravery?). She says she went cold turkey.  She says smoking is not cool or sophisticated, but dumb and crazy. "I used to smoke these menthol jobs," she says. She appeals to us not to start and says the Jacksons are too cool to smoke and David Groh is too smart to smoke. She calls out Lily Tomlin, who makes some incoherent comments about the tobacco industry. It's a very girl-positive moment, their camaraderie. They sing us off with "Friends."

This is a good time to look ahead 24 years (!) when Lily Tomlin and Cher star in Franco Zeffirelli's Tea with Mussolini together. 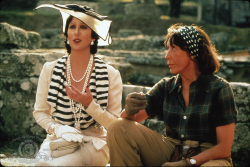 It's also a good time to see pictures of Cher smoking (and looking kind of unfortunately cool doing it) (click to enlarge): 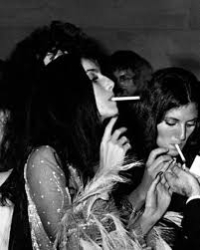 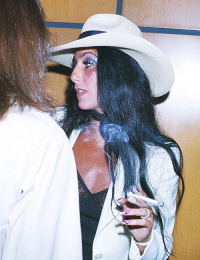 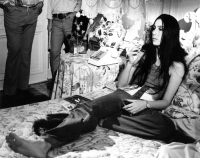 And Cher smoking in future movies:

Skit (Video)
Lily Tomlin's character Ernestine calls Cher at home. She gets her phone number from the CIA's list of celebrities. Ernestine has been reading the tabloids and is convinced Cher Bono is a "very active woman who makes Henry Kissinger look like a shut-in." She wants to find out "what's really going on." She reaches Cher at home in a loose-fitting blue housedress. A stern Cher answers a glamourous French phone (I had one of those and the receiver was very uncomfortable to lay your head on while talking to someone for hours while lying in bed). Cher calls Ernestine an "operator" and Ernestine retorts, "Judging by the media, I'd say you're the operator, missy!" Ernestine wants to know what Cher was doing a week ago last Saturday. Cher says "None of your business!" But then she relents and says she was taking Chastity to Disneyland. Ernestine turns that into salacious gossip. Cher complains that the tabloids have her dating 20 men. Ernestine says, "No wonder you're so thin!" Cher says all the stories are lies and complains about "the distortions and the fabrications." Ernestine asks if those are the two rock groups Cher is dating. Ernestine then asks when Cher and Captain Kangaroo are getting married. Cher says she's not dating Captain Kangaroo. Ernestine asks if Mr. Green Jeans broke them up. After the call, Ernestine calls Photo Screen magazine to try to sell the scoop.

Guest introduction (Video)
Cher is in the same blue dress as with her conversation with Ernestine. There's a big birdhouse in the background. Before Janet Jackson comes out, Cher talks about how, contrary to her reputation, she doesn't swing or drink....in the afternoons. She then brings out Janet Jackson and they talk on a couch.  Janet has her hair up and is in a pink dress. She says she's having "a lot of fun." They talk about Jackson 5 rehearsals and the annoying noise when you're trying to take a nap.  They introduce "The Jackson 5 + 1."

Janet actually did not make her television debut on this show, but on The Carol Burnett Show but interestingly doing a duet with Randy of Sonny & Cher's "The Beat Goes On."

Guest Spot: The Jackson 5 (+1) sing "The Eyes of Love/I Am Love" (Video, :29)
They are wearing fabulous multi-colored jumpsuits (yeah 70s!) and Jermaine takes the lead on the first song. Michael ends the medley singing and dancing. They do that slow-motion jumping thing they do at the end.

Skit: Lily Tomlin and David Groh go on a blind date. (Video, 18:59)
David and Lily meet at an Italian restaurant. Turns out his mother has set them up. Lily asks why a handsome man like him has not been swept up. David tells Lily he's looking for someone special, specifically a sincere, intellectual girl with a sense of humor and an interest in sports. Lily tries to impress him with all of those qualities, sometimes all at the same time (she overplays it, maybe for effect...but Lily Tomlin usually makes me laugh) but in any case David is not impressed. Finally in frustration Lily stands up and breaks a plate over his head and calls him one of "the most conceited dumbbells I ever met.". After which, he decides she is the woman for him. As soon as she shows she's lost interest in him, that's what peaks his interest and he decides he's madly in love with her. She sits back down and starts to tell him all the special qualities she's looking for in a man (which turn out to be the same ones). I used to think this sketch was boring; I now understand it as wonderfully subversive.

Cher Solo: “Since I Feel For You” (Video)
Cover of Ella Johnson (1945), Lenny Welch (1963)
This is another one of the beautiful sets this show was famous for with the theatrical recreation of a seaside dock, complete with a shimmering water effect, nets, wooden crates and muted lamp lights. I don't know what Cher's outfit, with its sequined cap, is supposed to represent, some late-night dock thief? She wears a short wig with bangs, a vinyl jacket and a black shirt with sequins. At the end of the song she stands at a railing in profile looking sad and then walks off stage. I liked it when variety show soloists would do that, walk off the set at the end full of ennui.

Skit: Cher and the Jackson 5 are dressed up as cavemen on an island. (Video, 27:05)
Janet looks adorable in this skit with a bone in her hair and they do a spoof of the Burger King ad to "hold the pickles, hold the lettuce..." Michael determines they've invented the commercial. Cher says they should destroy it but then God (as Art Fisher) can be heard telling them it's too late., the world has found out and "here comes another one." They all say "awww."

Donna Jean Brodine (Video, 28:59)
This time Cher shills something called The Wonder Bat. I've decided she talks like Dolly Pelliker in these Donna Jean skits. Someone named George crawls across the floor to hand her an empty champagne bottle. (Is this part of the sketch or behind-the-scenes malfeasance?)  Cher laughs at something funny on the bat. She tells a joke about "pummeling in the privacy of your own home...ladies what goes on behind closed doors is nobody's business but your own" (that's completely not funny now) and she proceeds to hit the bat on rugs, bugs, locks and clocks. She hits fruit and smashes up a birthday cake for ladies tired of blowing out too many candles (that gets a reaction). She asks us to send $1 for the bat and $17 for handling and postage (early overpriced shipping and handling prices joke) to Box 10, Sucker Falls. Donna Jean then proceeds to destroy the set's walls with her bat. I do believe this sketch predated Gallagher's smashing of Watermelons with his Sledge-o-matic but Gallagher did start performing his prop-comedy around this same time.

Skit: Adam and Eve (Video, 31:40)
The Jackson 5 are dressed in red choir robes singing about how the world is a mess (even then!) introducing the Adam and Eve skit with Cher, Lily Tomlin and David Groh, a very gender-bending take on Adam and Eve. Cher and Lily appear dressed in black. Cher (with a bobbed wig) says she Adam and Lily is confused and says "Do we look right to you? There's something wrong here...I have a feeling there's been a mistake." There are lesbian overtones. Cher says "they never make a mistake up there" and tries to sell Lily on Earth, trying to flatter her into going along with the program. Lily says "Well, you sound like an Adam" but she's "not getting the right vibes...We're the same but we're not different." Cher flirts with Lily while Lily talks about "polarities." David Groh appears in place of Cher and Lily says "that's more like it" but he says he's Eve to Lily's Adam and Lily says it's still a mistake. Lily accuses David of ribbing her (ha). At one point Lily says to David, "you are so stubborn you must be a Leo." (Hey, what does that have to do with anything?). Lily disappears and Cher returns and David and Cher hit it off, not finding any problems with the arrangement. Lily returns in a rage and Cher complains to her that "three's a crowd" and Lily asks "what am I supposed to be doing here?" She has an apple and says "wanna bite?"

There's so much going on here you could write an academic essay on it, but it's made further(ly) subversive by the fact that Tomlin was a lesbian woman who was not "out" yet. the fact that Tomlin is characterized as the snake (courting original sin) and that she is "othered" as neither male or female...so much here. Like the blind date sketch, I also thought this skit was boring for years. I wasn't paying close attention.

Skit: Lily Tomlin as a bag lady harasses Cher and David Groh sitting at a bus stop. (Video, 40:01)
Cher and David Groh looking like an upscale couple and sitting on a bench at a bus stop. Lily plays her adorable bag lady and harasses them, playing with their hats, teasing them that this might be an episode of Candid Camera. Cher looks great in this skit with that big hat. There's an Elephants Gerald joke (Ella Fitzgerald), Lily sprays Cher's face with a water flower (Cher seems genuinely surprised). You assume the baby buggy is Cher's and David's but it's Lily's and she's using it to store all her trash. She finally leaves with the bench and bus stop sign.

Cher recites poetry: Cher recites Rudyard Kipling's poem "If" (Video, 46:24)
This received three stars in my notes. Cher says the poem has survived to say more to current generations. Cher in a curly wig and pink jacket recites the Rudyard Kipling poem "If" while an animated cartoon from Spanish/Mexican cartoonist (Mad Magazine) Sergio Aragonés. The cartoon stays very literal and at the end of it God is revealed as a woman. The segment Cher says she has high expectations for Chastity when she grows up.

Big Finale (Video)
Cher does a song and dance with The Jackson 5 to a medley of their own hits. The big swinging Cher logo is in the background and the C-ramp is back. Cher wears a triangular afro-wig with sparkles in it (a bit of appropriation that would be hot water today). The Jackson 5 wear black and white suits and Cher wears a white pantsuit.

Cher really works hard to keep up with Michael Jackson but he's an effortless genius of a dancer. It took balls for her to try this and she doesn't embarrass herself. She seems pleased at the end. This is one of her great 70s-TV moments.

Closing (Video, 59:04)
Cher closes the show back from her yellow dress. She tells us to "stay cool." She thanks the Jackson 5, 6 and 7 and says her biggest hope is that she'll be here next week. She dances as the credits roll.

The TimeLife is missing the caveman skit.

VHI is only a half-hour show and is missing Ernestine, the blind date, Cher's solo, the caveman sketch, Donna Jean Brodine, and the bag-lady sketch and the Kipling poem. The Adam and Eve sketch is edited down.

The GetTV version is missing the blind date sketch and the Rudyard Kipling poem.