Torch Open/Opening Song: "Take Me Home, Country Roads" (Video)
Cover of John Denver (1971)
The torch song begins with Cher in a purple dress under a big, pink boa. She throws off the boa to show a purple halter dress with lots of fringe showing her belly button. There's a gauze curtain behind her. Lots of hanging hand as she sings this one. She does these really loud hand claps that are distracting and the set looks kinda rinky-dink.

Monologue: Cher starts by saying hi to Andrea. She asks the audience, "How do I look?" She says she knows that sounds like 'fishing' but she complains that the crew of the show has been telling her she's too skinny.  She says everyone at the office is trying to fatten her up: George Schlatter just gave her french fries; Paulette, her secretary, just gave her a malt; Redd Foxx gave her some soul food; Ted Knight gave her cookies. She says this will turn into the Totie Fields show. She says she's 104 pounds with clothes on, 103 otherwise and she makes a small boobs joke.  She jokes about having to buy clothes from the children's section of department stores. "It's a drag, you know?" She says Labelle is on the show and they have a number one single on the charts now with "Lady Marmalade" and she sings the safe-for-tv lyrics, "Voulez-vouz danser avec moi ce soir," (will you dance with me tonight?), the lyrics television censors insisted Labelle sing on the show instead of the real "Voulez-vous coucher avec moi ce soir?" (will you sleep with me tonight?). "Wait, that's not right," Cher says.  She ends with a big, dramatic hair flip at the end of the song. (I love the hair flip.)

Intro to Attitude skits (Video)
Cher wears a shiny, peach (or orange) turtle-neck dress. Redd Foxx wears a black suit. He makes a greasy pork chop joke and Cher says only he could get away with that and Foxx says you can get away with stuff if you have 'attitude' and he says Cher has atti-TUDE. Foxx does a Clark Gable and Spencer Tracy impression. Cher does her Mae West impression. Foxx and Cher sing a song about the importance of having attitude. Cher tickles him during the song.

At the end of the segment, Foxx and Cher do Voguing 15 years before Madonna. 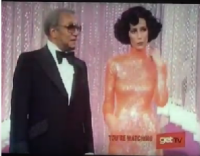 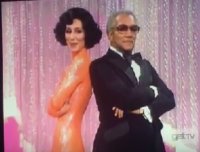 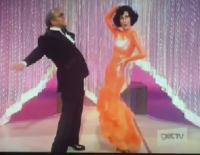 - Police Station: This is pur magic with Ted Knight as a police officer and Redd Foxx is a gambler and a bookie being booked. This is a funny skit. Foxx keeps getting charges added and each time he calls his own lawyer/bookie. Foxx tricks Ted Knight and the other policeman into a poker game. At one point the pay-phone starts spitting out coins like a slot machine. One of Redd's bets pays off and when tells Ted those are his winnings, the police decide to drop all charges. 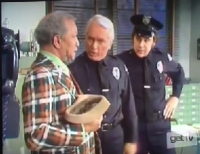 - Complaint Department: Lots of pants puns in this skit. Cher is in her 1940s hairdo and outfit. Foxx is trying to return pants that don't fit. Cher makes fun of the way he talks and thwarts his attempts to return the pants. When Foxx says, "I'm not a baby! Would you please change my pants!!" Mr. Cher Scholar laughed from the other room and said that was a funny joke that didn't land. 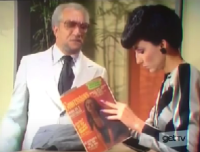 Life with Laverne: Laverne is back in the diner talking about a trip she made with husband Harry to Las Vegas where she won 18 bucks. The show's announcer plays the man behind the counter. She meets Ted Knight who turns out to be just as cheap as his Mary Tyler Moore character Ted Baxter. He wants 30 cups of the advertised bottomless coffee for 10 cents to go. He asks Laverne if she wants an autograph. He is as full of himself as Ted Baxter is but Laverne accuses him of pretending to be cheap to entertain them and that he's probably nothing like his "dumb character." This upsets him. He calls her a sexy woman to butter her up. She likes that. Then he says, "Now it's your turn." Now that Rhoda is gone, Laverne asks if she be Mary's sidekick.

Skit: (Video, 2:46)
Ted Knight is in a suit; Cher's in a long silver and black dress. Ted talks to Cher about being on the show. He says it's a big thrill for him. Cher calls him a famous announcer. He corrects her that he's an anchorman. The anchorman. 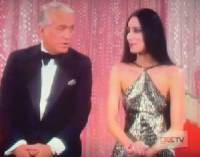 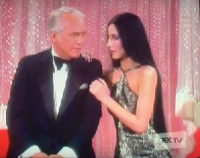 Skit (Video)
Redd Foxx is sitting in an alley with booze wrapped in a brown paper bag. He talks about the virtues of drinking milk. It's unclear whether this is a euphemism or an alternate reality. The milk inhibits his ability to speak. Ted Knight comes by in a suit and Redd Fox asks him for a dime. Ted calls him a bum and says "you'll only use it to buy milk." 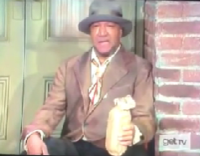 Saturday Night:
It's 1 am again. Cher arrives home in a gold and black outfit. She stands at the door talking to a cab driver. She can't remember anything about her date. She sits on the couch and tells us about Danny, a family friend who likes gourmet French food, heavy on the sauce. She tells a joke about being loaded. She asks on of her plants if it needs a drink. She advises it not to start. She says she had only one margarita but she didn't eat. She goes to the fridge and only finds a plate of red Jell-O. She says she doesn't want to eat anything shakier than she is. She's barefoot as she sits on her bed and goes through a purse finding matches from Tijuana and Fresno and then she figures out it's not her purse. As she's changing her clothes she shows us a pretty scarf she has and again tells us it's not hers. She goes to bed in a blue nightgown with a white peignoir. She says she won't get up even for a fire alarm. Her blue phone rings and she picks it up and it's Gregg Allman. "Gregg, how ya doing, man?" She agrees to met him in ten minutes and then says, "Anybody wanna call the fire department."

Cher Solo: "Never-Never Land" (Video)
Cover of musical Peter Pan (1954), also Todd Rundgren (1973)
Cher wears fur with a big hat and hand warmer. The set is pretty in blue and white. The snow swirls at the end and Cher walks off. I feel the song never really takes off. But the set effect is like a lovely Cher snowglobe.

Skit: Redd Fox as a financial advisor talks about the recession and how the best advice is to "try to get a job" and then put your money in the Soul Savings and Loan.

Skit: Cher introduces a skit about struggling writers, Redd Foxx and Ted Knight. She's wearing a short wig and a black top. She tells a joke about a bad Shakespearian actor bombing on stage and saying, "Don't blame me; I didn't write this junk."

Ted Knight tells Redd Foxx about another rejection slip they've received for another one of their movie scripts. They've struggled so long as writers, they decide it's time to commit suicide and Ted pours some poisonous drinks. They argue about how to write the suicide note. Redd says "goodbye cruel world." Ted says, "I don't like it!" and suggests "farewell heartless universe." Redd complains that's the same thing. Ted says Redd should stick to storyline and that he'll do the dialogue. They decide their plight would make a good movie script. They start writing a new script and decide to toast to their renewed lease on life. They accidentally drink the suicidal drinks and die. They are very charming together, these two iconic 1970s TV character actors.

Cher joins them for "What Can I Do For You" (Labelle, 1975, Video)
Labelle are in their far-out costumes. Cher is in a wild, curly wig with a mirrored headpiece and complimentary outfit. The outfits are throwing spectacular camera flares. The is the single best thing from this show. Labelle tires Cher out. She's exhausted by the end. Patti hugs her. It's brilliant, iconic 70s television full of sparkle and joy.

Close: From the finale stage with Labelle, Cher is wears an additional feathered cape. She thanks the guests. Ted Knight and Redd Foxx join them. Cher calls Redd Foxx "the nicest, naughtiest man I've ever met." Labelle and Cher sing "Lady Marmalade" while the credits roll. Ted Knight and Redd Foxx dance along. Sometimes it seems like they're singing "coucher" and sometimes "dancer." Good stuff.

GetTV is missing the Saturday Night sketch and the Cher solo.

VH1 was a half-hour show and is missing the Attitude sketches, Life with Laverne, the Cher skit with Ted Knight and the wino skit with Redd Fox, the Cher solo, and Redd's Savings and Loan sketch.

Highlights: One of the best shows of this series. The song with Labelle is the single best moment on the show. It's delightful seeing Redd Foxx and Ted Knight work together. Their egos and characters complement each other very well. They should have had their own show. Cher and Redd Foxx voguing.