Torch Open/Opening Song: "If You Wanna Get to Heaven" (Video)
Cover of Ozark Mountain Daredevils (1973)
Cher wears a purple fur that she throws off to reveal a halter top and black and dark purple dress. The backdrop is a gauzy, fur-trimmed curtain. More loud clapping. 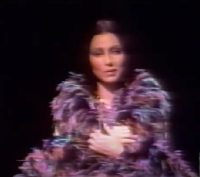 Monologue: Cher plans a Hawaiian vacation with Chastity. Cher says they have matching bikinis but "mine is smaller." She makes a topless joke. She talks about what the Hawaiian flowers behind the ears mean (married or available) and how she is "available" but "too tired to do anything about it." She introduces "two of my closest friends, Rita Coolidge and Kris Kristofferson" and then Jean Stapleton, "a terrific woman; I really admire her" and tells us to "Stay cool and relax" a quote Carol Burnette will later use to spoof Cher on this very show.

Skit (Video, 5:23)
Cher and Jean sing the Girls Are Smarter song. They wear black jackets with red and yellow shirts. They sing about how girls are not weaker or slower. They sing about girls being hipper and quicker and witty and "lots of fun." They talk about "brand new freedom" and "times are changing."

- Cher playing poker with Kristofferson, using household goods for stakes when they run out of money. Cher seems cute, my notes say. (Video)

- Cher and Jean are two "women" drivers who crash into each other and don't know how to report the incident.

Saturday Night: Cher has had a reunion date with her high-school crush.

Cher Solo: "Many Rivers to Cross" (Video)
Cover of Jimmy Cliff (1969)
Cher also sang this song on her Heart of Stone tour. It looks like Cher is in a green dress with baby's breath in a big curly wig. 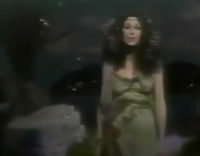 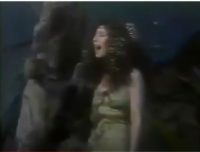 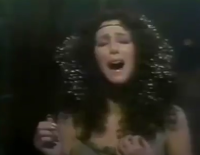 Skit: Jean Stapleton is a tipsy TV chef trying to make a turkey. This might be a spoof of The Galloping Gourmet, who often got tipsy during his cooking demos. (I loved that show).

Duet with Guest (Video)
Cher, Kris Kristofferson and Rita Coolidge to a country medley. It looks like the Hee Haw set. Cher wears her turquoise pieces and a headband and an arm band. Rita wears silver. Lots of hand hanging. Cher's voice sounds low and smokey.

Cher Finale (Video)
Cher introduces a medley of Jamaican reggae. There are four male dancers and Cher in a reggae hat and long ponytail.

Close (Video, 4:07)
Cher closes the show saying "Goodnight, stay cool and I love you" on the Reggae set. She seems looser as the credits roll.

VH1 was a half-hour show and is missing Life with Laverne, the Rita-Kris duet,  Saturday Night, Cher's solo, the second Girls skit and Stapleton's chef skit. The Stevie Wonder song is also cut from the reggae segment (full audio).

Highlights: The country duet with Rita Coolidge and Kris Kristofferson, Cher's first performance of "Many Rivers to Cross"