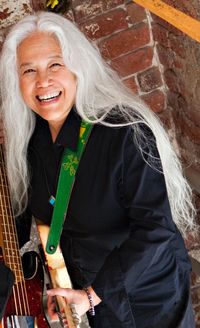 Of all the musical performances on The Sonny & Cher Comedy Hour, not including Cher performances, the two segments I continue to love over the years are from Gideon and Power who did a crazy performance of "In the Upper Room" on Season 1, Episode 3 on August 15, 1971, and the all-girl rock-band Fanny who sang "Charity Ball" on Season 1, Episode 5 on August 29, 1971. I've shown all my close friends and Mr. Cher Scholar these performances and I don't know what it was about them but they transformed a comedy variety hour into something more like Later with Jools Holland. Season 1 was hot!

So imagine my excitement when June Millington of Fanny spoke with me this week about her experiences on the show and her musical influences: beyond giddy and totally surreal! Many thanks to June Millington for giving us a sneak peak back at her life in 1971.

The band Fanny was active from 1969 to 1975. Sisters June (guitar and vocals) and Jean (bass and vocals) Millington were born in the Philippines but raised in Sacramento. Eventually Nickey Barclay played keyboards and Alice de Buhr played drums. They were discovered by famed producer Richard Perry playing at the infamous Troubadour in Los Angeles in 1969. Charity Ball was their second album released in 1971. The band photo for that album was taken by Candice Bergen. June and Alice left the band in 1973 and Patti Quatro (sister of Suzi Quatro) joined along with Brie Brandt (mother of Playboy Playmate Brandi Brandt). Jean later married Earl Slick (guitarist for David Bowie and John Waite (Missing You period).

Cher Scholar: It seems like your appearance on The Sonny & Cher Comedy Hour was at the height of Fanny's fame. What other television shows did Fanny appear on?

June Millington: Not at all. That didn't feel like the height to me. It might've been at the middle of getting our stride and solidifying our reputation, however. Sonny and Cher was in October '71, just after we'd played both the Fillmore East and Fillmore West, played live with Barbra Streisand in the studio, released two albums one after the other, the second had a photo taken by Candice Bergen [see right]. But just before we recorded at the Beatles' Apple Studio and went on endless tours with people like the Staples Singers, Chicago, Leon Russell, Dr John. We had already played on The Tonight Show and The Kenny Rogers Show (Canada) as well. In the time I was in Fanny, we played on all the national rock shows, for example Midnight Special and Don Kirshner Presents and in Europe on BBC's Old Grey Whistle Test and Germany's Beat Club. 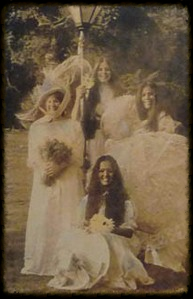 CS: How did the band come to appear on Sonny & Cher?

June: I'm sure it was a combination of Reprise/WB, management and the booking agency. We had an excellent team.

CS: Do you have any memories of meeting Sonny or Cher or interacting with the show staff?

June: Cher wanted to meet us so sent Sonny to our dressing with an invitation to join her at theirs! I'll never forget how generous she was.

CS: What was involved in taping the segment? Was there a live audience present?

June: We had to lip-synch, which we had pretty much down as a skill by that time. We hated doing that, but did it repeatedly. The set-up probably consisted of finding our marks, minding the lights, and making sure we could hear the guide track. There was a live audience, which helped Sonny, Cher, and Phyllis Diller do their routines! The overall feeling was warm, and filled with respect.

CS: Did the appearance raise your profile any further? Or boost album sales?

June: It certainly raised our profile. I still hear people talk about it now! It was so unusual, if you caught us anywhere at that time, live or on tv, you never forgot it. I just can't help but think that it would've boosted album sales.

CS: How did you put together your casual outfits? 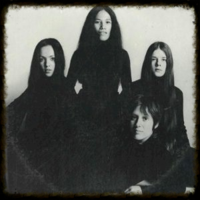 June: We did our own shopping. Jean was particularly savvy. She could've been a model, or designer, for sure. So the look was ours and natural. I think it made us look and feel more powerful, casual as it was. It was of the times, and we could project easily.

CS: There's a big smile on your face at the end of the performance. Do you remember what you were feeling?

June: I was feeling the love from Cher and Phyllis, who were in our direct line of sight, the excitement of having done a good job. We hard worked to hard to get there, and we were just as professional as everyone else. It was a great feeling. And FUN!

CS: What can you say about the equipment on the segment, your guitar? I noticed Sonny & Cher logos on the piano. Was that their piano?

June: No, it was our – Nicky's – piano. No problem using their logos, though! We loved them. The guitar was my red ES355, which was a stereo rig. I'm deaf in one ear, (from birth we believe, certainly not rock & roll), so could only hear one side away. But I experimented with all sorts of stuff. In any event, we weren't even plugged in! 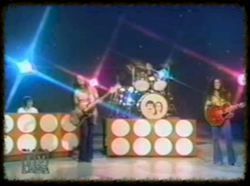 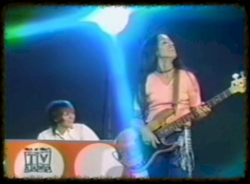 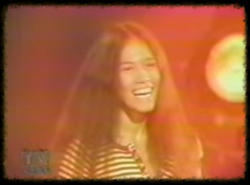 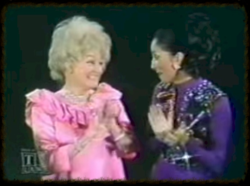 CS: Can you talk about the song "Charity Ball" — who wrote it and how it was recorded?

June: It was a group song that we sang lustily, started at our house Fanny Hill on Marmont Lane in Hollywood, (think the Chateau Marmont, but a few blocks up in the hills), after we were dis-invited from a party. Apparently, we might've been too sexy for the host's new young girlfriend. So, at our dining table we began thumping out "F*%k You" which became "Dance, ooh." The rest was done and arranged in the studio.

CS: How do you feel about the album looking back?

June: I feel great about it. Proud. Not only is it excellent music played well, but for girls just to get into the studio was an accomplishment. I'm extraordinarily proud of our work.

CS: What other bands were you fans of around 1971?

CS: Are there any all-girl groups you follow today? How do you feel about Sleater-Kinney?

June: Having started in bands in late '64, it's difficult to impress me. It's not the playing that gets me, because we came from the original garage bands, and there were so many good ones. So it's got to be the lyrics – when I can understand them. That's tough for me. I'm from the era of Ella Fitzgerald, Nat King Cole, Sarah Vaughn, whose every word, every syllable, you could follow. Old-school!

CS: Fanny individually worked with some heavily-testosterone bands of the time, Joe Cocker, Jethro Tull, Humble Pie...how were you treated?

June: The better they were the less threatened they were. So they treated us well. No problems whatsoever. In fact, I think most of them were fans.

CS: Anything in particular you'd like to promote now?

June: My upcoming autobiography, Land of a Thousand Bridges, and always IMA: the Institute for the Musical Arts at http://www.ima.org. It's a non-profit for women and girls in music that will be paying it forward in every way. We already own a property in Massachusetts that has 25 acres, a house, 2 barns, one of which has a performance space and 2 recording studios, originally an 1816 estate revamped.

This has pretty much my philosophy and intent: ROCK THE BOAT: HOW PLAYING LIKE A GIRL CAN CHANGE THE WORLD [June's awesome Ted Talk: Millington presents the revolutionary concept of joyful fearlessness. Drawing on the insights from her pioneering career for women in music and her educational work with girls, Millington discusses how playing music together can change the world. Keywords: self esteem, empowerment, and collaborative leadership skills.] 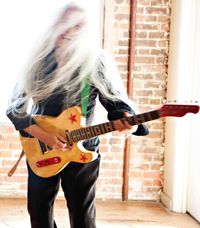 When you start looking, you find fans of Fanny everywhere. Here are some good places to start your research: