The Beat Goes On: From Hippie Phrase to Common Idiom 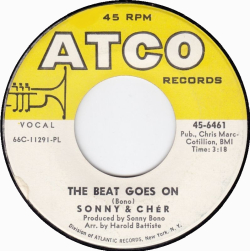 For a while now I've noticed the phrase "the beat goes on" is referenced more often in daily conversations, by radio announcers and TV commentators and I'm starting to notice it more in both new and old pop, rock and rap songs. Inspired by the many episodes of Lexicon Valley I've been consuming, I decided to so some research online to see if I could find out how many times the phrase is referenced, since when it has been referenced and in what contexts.

"The Beat Goes On" was a Sonny & Cher hit in 1967, a song written by Sonny Bono officially. Wrecking Crew's bassist Carol Kaye takes credit for the bass line, which in no small part made the song a hit. But Sonny is the only credit for the lyrics and the phrase itself, which since the mid-70s has been gaining steam as an idiom in its own right.

I decided to start with online references to what people think the phrase means.

There's a consensus that the title means the fact that time keeps marching forward, no matter what fads come and go. The beat itself could be a heartbeat or a musical beat. The word is vague. Some have argued that the word 'beat' is borrowed from beatnik culture, but that explication isn't directly supported by the lyric content, despite the contemporary details listed, which could be read as 1960s hippie-things.

Many poets and song writers have created similar metaphors for this same idea, my favorite variation being this one: "Time keeps on slippin, slippin, slippin into the fuuuuture."

I couldn't find a single song reference to the phrase before 1967, the date Sonny & Cher's song peaked at number 6 in February and spent 11 weeks on the Billboard charts.

Song used in Enestro pharmaceutical ad for heart disease, cholesterol and stroke prone patients.  Not only is the original song used but the phrase is referenced to indicate a long-beating-heart for users of the product.

I've been seeing this lately, what with the beet craze going on, the song referenced on local menus. Click to enlarge.

A discontinued dish from a local Vegetarian restaurant in Albuquerque called The Acre.

From a local place called Vinaigrette: 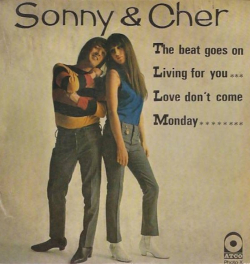 Then I did an Internet search of the phrase. Some examples below. Note the types of usage: heart and health stories, newsletter titles, music reviews, beatnik references, stories about the passage of a life.

The L-type calcium channel in the heart: the beat goes on
https://www.ncbi.nlm.nih.gov/pmc/articles/PMC1297268/

I searched exclusively for "the beat goes on" in the New York Times:

And the Beat Goes On: The Moslty Black Urban Roller Skating Scene
https://www.nytimes.com/2018/12/01/style/black-roller-skating-united-skates.html

(and the article above was un-ironically placed above an article about Cher's Broadway show! Phoenix's New Album Arrives in a Darker World, but the Beat Goes On ...
https://www.nytimes.com/2017/04/24/arts/music/phoenix-ti-amo-interview.html

And the Beat Goes On, but at Different Speeds - The New York Times
www.nytimes.com/2006/11/18/nyregion/nyregionspecial2/19njarts.html

Drum Circles: Where the Beat Goes On - The New York Times
www.nytimes.com/2006/03/24/travel/.../drum-circles-where-the-beat-goes-on.html

As Recordings Languish, The Opera Beat Goes On - The New York ...
www.nytimes.com/1997/01/19/arts/as-recordings-languish-the-opera-beat-goes-on.html

That's probably and infinitesimal fraction of the articles that reference the phrase.

Then I did a search for the phrase in book titles on Amazon.com. There were 55 pages of results. Here's a sampling below. There are novels, music anthologies and non-fiction books about health and heart wellness.

And The Beat Goes On Heart Attack Survivor T-Shirt

And then, because I work at a college, I have access to academic databases like JSTOR. I searched this for additional references and found these below. Note the versatility and variety of academic disciplines using the phrase.

"And the Beat Goes on: An Introduction to French Techno Culture" by Nigel E. Smith, The French Review,  2004

"And the Beat Goes On: An Introduction to Popular Music in America 1840 to Today" Review by: Wayne Schneider, College Music Symposium, 1996

"And the Beat Goes on: Defining Postmodernism and Its Other Narrating Postmodern Time and Space" by Joseph Francese

"A Primer to Postmodernity" by Joseph Natoli

"The Beat Goes On For New Hybrids" by S. McGee, The Investment Dealers' Digest,  2006

“The Beat Goes On”: MPLP, RDA, Digitization, and Archivist as Historian" by Thomas J. Frusciano, Journal of Archival Organization, 2010

"The beat goes on: ciliary proteins are defective in Meckel syndrome" by Gibson WT, Clinical Genetics, 2006

"The Beat Goes on for Solidarity Work with the New South Africa" by Nesbit Crutchfield, The Black Scholar, 2015

"The Beat Goes On: Does choreographing to pop music hold traps or triumphs?" Dance magazine, 2010

"The beat goes on: New antiarrhythmic aims to bring rhythm back to the heart" Drug Topics, 1999

"The beat goes on: a commentary on Kelley's ‘Expanding the analysis of social orientations…’ by John Schopler, European Journal of Social Psychology, 1997

"The beat goes on as the federal shutdown ends. Sort of. For a while" U.S. News and World Report, 1996

"The Beat Goes On, And Business, Too: Lawrence Ferlinghetti is Still Rebelling as a Bookman" by P. Wilner, Publisher's Weekly, 2007

"The Beat goes on: Carolyn Cassady, wife of Neal and lover of the road man" by N. West, New Statesman: London, 2007

"Beat goes on - The downturn has not dampened festival crowds, leaving the way open for brands to capitalise." Marketing, 2009

"The Beat Goes On - The Chiefs pounded the slumping Raiders for the 13th time in their last 14 meetings" by Michael Silver, Sports Illustrated, 1996

"The Beat Goes On Operating room report: Surgeons now mend broken hearts without making big incisions or even, in some cases, stopping the heart" Popular Science, 2000

"The Beat Goes On: You might think the Supreme Court's Riegel decision was the death knell for heart device cases. The state of the law is unclear"  by H. Shkolnik, M. Breit, Trial, 2010

"The beat goes on The need for customized training hasn't gone away despite the downturn" by S. Arnoult, Air Transport World, 2002

"The Beat Goes On: Consolidation isn't going anywhere, but the same can be said for some beer wholesalers" Beverage World, 2002

"The Beat Goes On but there's a lot more to cable music networks than just videos. MTV is redefining itself for a new generation" by K. Zimmerman,  Cablevision (Denver), 2000

"Tissue engineering: The beat goes on" by Zandonella C, Nature, 2003

"HLA in Liverpool: the beat goes on" by Travers PJ, International Journal of Immunogenetics, 2012

"Evidence vs experience: The beat goes on" by Martin G.I.,Journal of Perinatology, 2008

"The global merger boom The beat goes on" Economist (London), 2007

"Midwest: Beat Goes on in the Heartland" The Practical Accountant, 1999

Check out the images that use the phrase.

Finally, I tried to search databases of idioms to see if this particular one was attributed anywhere. I couldn't find anything on it. So I contacted Russell from The Etyman Language Blog: http://etyman.wordpress.com. This is what he had to say:

From what I can find out, the phrase "the beat goes on" does indeed seem to stem from the use by Sonny and Cher. It's possible that it was used orally prior to that but I haven't found anything to suggest it appeared in text prior to the song.

As to how I research these things, the first (and quickest) step is to do what everyone else does - internet search. If there are conflicting stories, I fall back on the Oxford English Dictionary (full version) and the Merriam Webster. The OED often gives the first recorded use of a word in print although it's at its best with words that have been around a long time, and phrases are not always included. "The beat goes on" is not in the OED or MW. Another resource is the online Dictionary of American Regional English, which cost about $70 per year but some local libraries have free access. [ Mine at CNM did not. :-( ]

At some point, I sometimes have to make use of more obscure books such as "Liddell & Scott's Greek Lexicon," Shipley's "The Origins of English Words: A Discursive Dictionary of Indo-European Roots," Ayers' "English Words from Latin and Greek Elements," and any number of poplar "word origin" books.

I have yet to track down some of those sources. The next step will be to see if this was a phrase verbally spoken prior to 1967. I can easily picture some official beatnik or proto-hippie using this phrase at some hipster's hootenanny.

Meanwhile, Cher is still singing the song in live shows (with Sonny): 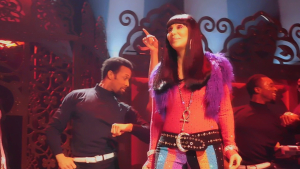 Cher singing the song through time:

Other verbiages from the pop music lexicon:

15 Overused Phrases You Hate That Came From Songs You Love