The show started as a summer replacement series so the first season was very short, only running from August through September 1971. 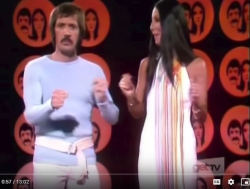 They're wearing coordinated fringe outfits, Sonny with a macrame belt. Cher sports long turquoise earrings, bracelets, and is very tan. As they said in the 1970s, you can never be too tan or too thin. They were unfortunately wrong on both counts.

While they sing they clap very loundly. For some reason this always annoys me. Loud claps followed Cher into her solo Cher show.

Banter: Sonny says “This is the beginning of our show.” I don't know if he ever said this in their live shows but due to the fact that they've been singing already for 3 or 4 minutes, this announcement never comes at the beginning of their show.  Cher still said a variation of this statement into her concert years, at least on Heart of Stone, Believe, Farewell tours and Vegas residencies. Maybe we should consider the opening song a prologue to a show.

Even as a kid I loved the occasional back shots of the stage with the audience in the dark cavernous studio. 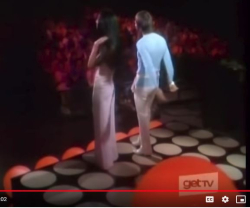 There are fat jokes (Sonny's mother) and Italian jokes. Sonny professes opening his “big Italian heart.” During that time period, culture was exploring ethnicity and uniqueness so these jokes didn't seem offensive. Decades later, after language studies uncovered the damage ethnic jokes can cause, these jokes won't age so well. But back then, ethnic people were not on TV at all, so this was the dawning of exploration of ethnic cultures within America: ethic foods, clothes, and sometimes jabs at each other. It seemed fun at the time. Cher wears 750-carat Star of Queensland sapphire (provided by Kazanjiian Jewels of Beverly Hills) and also sports my favorite Cher wig style, the multi-bun bun, this one with braided offshoots. Love it!

Security guards keep Sonny from getting close to Cher. 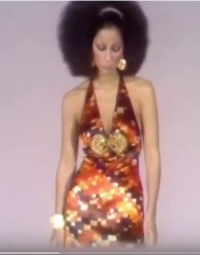 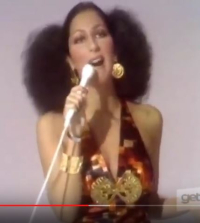 A beautiful African-inspired wig and orange pattern. Cher would appropriate many ethnicities and cultures on the show. Diane Negra wrote a great section of her book about Cher's televisions appropriations. It's called Off-White Hollywood. Cher sings a slow, strung-out version of the Al Jolson song. Cher as a belting torch singer is a new invention and audiences loved the dramatic end. Cher was still a folk singer two years prior. It wasn't until the turn of the decade that their nightclub act provided space for this new style that would become a trademark.

With this first solo performance, Cher introduces years of examples of singing the American songbook in her unique torch style. This would be a favorite segment of the show for many fans.

Swordsman Skit: Sonny tries to rescue fair damsels as a swordsman named Scaramoush. Cher bends up his mask out of annoyance. On these early episodes Cher is early configured as a woman with standards that her man is not living up to. Her attitude is one of distant annoyance. She's not going to break up with him, but she's going to express her disdain. A liberating attitude for television at the time. For the audience, this is also a comforting situation. We don't fault Cher for her attitude but we still believe Sonny has a shot at improving the situation. So we stay tuned for this romance "in play."

During the First installment, we are inaugurated with “Woman Is,” a very pretty introductory ballad about how a woman is mother and child, deep calm, earth, water and fire, a well of desire, sometimes cold, a precious treasure, “the wonder that are his/glad that woman is.” 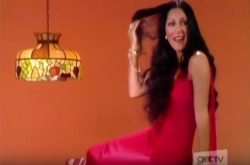 Cher starts out with long hair curled at the bottom and she's in a red, slip dress. Occasionally she sings with her hand on her hip. The pizza parlor lamp is already in use. The background is orange. This is the only time the show allowed for a guest piano player, Jimmy Durante.

The Vamp were usually trilogies focusing on Cher as a historical "vamp" or femme fetale, in some cases just a historical figure. These were interestingly powerful setups as Cher was always triumphant (unlike movie femme fetales) and usually at Sonny's expense. In most segments she plays a smart, bemused broad getting ahead. 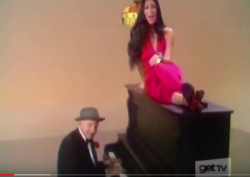 Blue screen effects at the end bring all the characters together. It gets weird in some of the reruns when you see more characters in the finale than you saw in skits. I would always count the Chers. There should be 4. 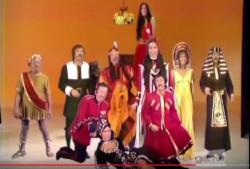 The Cultural Spot:
Video: (full episode part 4)
This rerun only aired TV Land and our YouTube clip is from GetTV. But this was the first Opera of the show, "Commercial Americanus" a big production of 1970s commercials, including songs about Yellow pages, You Deserve a Break Today (McDonalds) and Oscar Meyer. Chris Bearde cameos as a Irishman 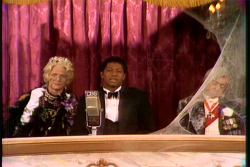 Freeman King would always introduce the Operas from theater balcony or later, a leather chair.  Sometimes he would use slang (then referred to as "jive") in these introductions, as in this one where he says, "There they is." Freenman King was an important part of the Comedy Hour's (and CBS's) new adventures in providing room for more people of color. That they gave him the introduction to the penultimate segment of the show, this American "Culture Spot," was significant and probably meant to disrupt existing racial stereotypes. Freeman King was perfect for this, striking an amazing balance of neutrality between various cultural ideas (both black and white).

TV Land did not air this Concert segment but GetTV did. Which just goes to show how rerun channels continually make edits to shows from the 1970s due to increased space for commercials. Not cool.

These concerts were usually medleys and in this segment, Sonny & Cher sing “Aint No Mountain High Enough/Suspicious Minds,” a cover of Marvin Gaye and Tammi Terrell, 1966, and Elvis, 1969. They sang the medley again in the 1/24/72 episode. 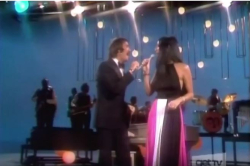 I loved the Concert segments most of all. The stage was bigger and full of lights, they sported high-tech microphones (for the time), showed their full band, and they dressed up! Their costumes would be much more glamorous than for the opening segments and the sequins in Cher's dresses usually popped with lens flairs. In this episode Sonny wears a black suit and Cher wears a black, white and pink polyester dress. Note the characteristic hanging hand and lip lick (and in many cases, this was really Cher licking her front teeth). From the beginning!

I Got You Babe:
Video: (full episode part 5)
Each episode ended with Sonny & Cher singing their signature hit, "I Got You Babe," sometimes in different outfits than you saw them open the show wearing! This is when they'd graft the end of one tapped show on to another. Wha?? So disorienting. Anyway, this first episode ends with Sonny nightclub act speech about their origin story: that 7 years ago Sonny bought a piano for $85 and that sealed their fate because this song was written on it back when Sonny & Cher had not literally a pot to piss in, only each other and a philosophy. I've never thought this song rose to the level of a philosophy but I'll leave that to some doctorate student out there. It was certainly a point of view: us against the world, from which this song and others was derived. 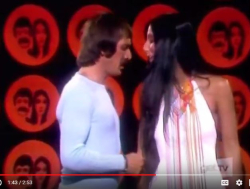 I used to love to watch their body language during these segments to determine how they were getting along as their marriage started to crumple apart. I've watched the series three times and it's really hard to tell. They were better actors than people gave them credit for. You might not have noticed in the skits, but they play "happily married" with real fortitude.  In some segments they're arm in arm. Maybe they're nervous this episode, but the only PDA comes when Sonny gives Cher a finger poke.

Later, when they're saying goodbye to the audience, Sonny does this thing he would do once in a while where he raises his arm in front of Cher's face. I hated this! Later, as the show evolves, she'll slap his hand out of the way. Maybe she was growing into the shoes of her very resilient and capable persona. 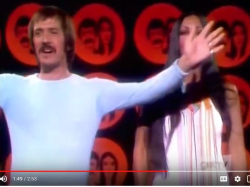 From the beginning the show's costumes were handled by Ret Turner (the cast) and Bob Mackie (Cher) but he wasn't doing very glamorous dresses yet, maybe due to their initial, summer replacement show budget. They also didn't fit so snugly on Cher as if he hadn't worked out her body type yet.

Highlights: The first VAMP segment, introduced by "Woman Is."