Intro: Cher does another intro for this episode. (Video)

“And now, The Sonny & Cher Show. Try it, you’ll like it.”
Cher delivers the tag line with the Jewish accent famous in the Alka-Seltzer commercial.

Banter: Sonny complains that they always pick songs for Cher’s key and Cher answers that they haven’t found Sonny's key yet. This is a joke about Sonny's bad singing. Cher makes another joke about his height. Sonny talks about his interest in body language. He completely misreads Cher’s body language and says that even though Cher "sounds a little nasty from time to time" (Nasty Women!!), she’s really open. Cher tries to start singing again and Sonny complains that Cher is silent at home. Cher says there’s no one to talk to at home. Talking here becomes an innuendo for sex. Cher claims she wouldn’t give Sonny the time of day. Sonny amuses himself with a joke about Cher not knowing her ass from her elbow (although he says clasp instead of ass). Sonny ends up screwing up the next joke, making it sound more lurid than intended. They laugh and Cher quips “that must be the Italian version.” The final joke is about Cher’s body language saying “no” from now on, another innuendo that Sonny won’t be getting any action at home. 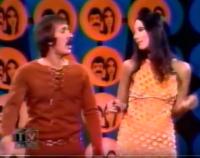 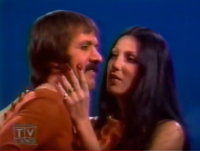 The I Got You Babe Skit: This is a hard skit to find video or images of online, because it’s called the I Got You Babe skit. Sonny plays a struggling writer named Eddie Farber and Cher plays his struggling model wife Holly. They even had a cartoon created for it. In this episode Holly admits to having an affair. My notes say I enjoyed the skit but I have no memory of how it ends.

Guest Spot: Kate Smith sings “If He Walked Into My Life Today” from the musical Mame.

Fortune Teller: Sonny is in a top hat and tux. Cher predicts a rich Texan will give him one million tax-free dollars. Assuredly he gets some comeuppance in the skit but I failed to write down what it was.

Skit: Sonny plays a driver whose car runs out of gas in this ecology satire. The cast does a song-and-dance number called “Gobil” which is a parody of Mobil gas company. Sonny is advised to start walking. There’s a big Sonny & Cher cartoon faces circle attached to a nearby tree.

Cher Solo: “How Long Has This Been Going On”
Cover of George & Ira Gerswhin (1928)
Cher wears a slim gold dress with hoop earrings and an afro hairstyle. She licks her teeth. She sings the song again in 1976. I starred this version but it’s not available online.

Skit: Sonny plays the God of Lightning and Thunder, Thor the Viking. He calls it Thorsday. Cher calls it All Fools Day. He tries to get a bold to lightning down with his hammer.

Fortune Teller 2: Cher predicts Kate will meet a tall, dark and handsome man with a mustache. The Quarter slot is on the left now. They make a now-obscure Gilbert Roland joke. I had to look him up.

Skit: Rocco’s Tea Room: Kate Smith is a waitress and Sonny & Cher are two lovebirds sitting at a table. Sonny sings “Tea for Two” and every item referenced in the song is brought to their table. Cher looks glamorous in a wacky bun. There’s money in her hair. Steve Martin appears with a phone and a baby. 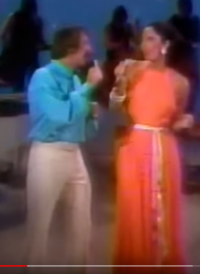 Concert: “Walk a Mile in My Shoes/Games People Play” (Video)
This is a Joe South twofer from 1970 and 1968
Cher wears a crazy braided hairdo. Sonny wears white pants and a puffy, blue blouse. Cher wears a sleeveless orange dress with a pretty hanging white belt. They still can’t sing “give a damn” and this is a slower version that their rendition of "Games People Play" from episode #4. They acknowledge the band at the end.

I Got You Babe: They're appearing in incongruous outfits again. They’re wearing the fruity white outfits from an upcoming episode. Sonny break’s Cher’s nail and they thank Spiro Agnew for not being on the show. They seem very physical with each other at this point. They year (and the show) are still young.

Highlights: The guests on the show here seems like they might be aiming for an older demographic. And it's interesting that the show was able to straddle age groups: parents, teens and young kids (which would include me somewhere around 1973-4). This is the first episode with a Holly and Eddie Farber skit. And Cher does a great rendition of “How Long Has This Been Goin’ On.”