Opening Song: “Put a Little Love In Your Heart”
Cover of Jackie DeShannon (1969)
Sonny is wearing green and Cher is in a white dress with fruit designs on it. Sonny & Cher also used the song as an opener in their 1976-77 show.

Banter: Unfortunately, the clips aren’t online but Sonny talks about their arguing and "getting into it" on stage. Cher says there’s no reason to "get into it" at home. She adds, “you’d be in trouble if I didn’t come with instructions.” The show’s audience is made to think Cher calls the shots at home and in the bedroom and that Sonny is clueless. In reality, Sonny was more the unfaithful lothario type and Cher was nothing like the bitchy, femme fetal she portrayed on TV. But she was learning…

Sonny mentions the Italian anti-defamation league.  The show mentions defamation leagues a lot and in the early 70s, groups were organizing and people were paying attention to language and representation on TV and in the press. The show both addresses the leagues but makes fun of the groups. Cher makes a fat-mother joke. Sonny scolds her in saying Italians revere and respect their mothers. Then he does intentional Indian-defamation with the comment, “Your people sew beads...make moccasins...wigwams” and he calls her Pocahontas. This sounds more Trumpy that it really was. But the show was committed to exaggerating Cher’s Indian look. Cher retaliates by claiming her people tied the Italian Columbus to his boat. She gets the last work in the New World vs. Europe debate.

Skit: Chad and Lorne are in prison with the cast of the show. Sonny gets thrown in jail too. He's wearing a top hat and tux. The music starts and Lorne Greene and Chad Everett start singing "Big Spender” (Sweet Charity, 1966) and pushing Sonny around. The other casts join in and they do a full chorus line with kicks. You can see Steve Martin in full beard walking around. At the end, Sonny says, “I wanna see Pat O’Brien.” 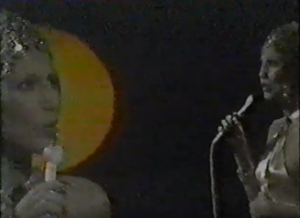 Cher Solo: “I Got It Bad and That Aint Good” (Video)
Cover of Duke Ellington (1941)
Cher wears a slim 1930s gold dress with a sparkly copper cap and one earring. Her eyebrows are so thin. I love the camera flares that seem like sparkles all around her. She sings in front of a big orange bulb. As she sings, her brow wrinkles. What is she thinking? These double images were pretty hi-tech at the time.

Skit: Sonny is Nostradamus. They make a bathing without a suit joke. Cher cracks up. Calls Sonny “little shaver.”

Skit: Lorne Greene (from the TV show Bonanza) plays Wyatt Earp and reads Shakespeare as Sonny enacts the Gunfight at the O.K. Corral as Doc Holiday. Some good Steve Martin mugging. I starred this. It must have been interesting.

The I Got You Babe Skit: This Holly and Eddie Farber skit looks like it takes place in the same apartment that the 76/77 show’s Mr. and Mrs. couple used to live in. Very contemporary furnishings. Lots of sexual innuendos as photographer Chad Everett tries to take nude photos of model Holly. Sonny is furious and says “You’ll be lucky if you see my wife’s tongue!” and then calls fellow model, played by Peter Cullen, "Mr. Muscle Beach."

Concert: “Aint No Mountain High Enough” / “Suspicious Minds” (Video)
Ashford and Simpson song made famous by Marvin Gaye and Tammi Terrell (1967) and Elvis Presley (1969)
They also did this medley in the premier episode in 8/7/1971.
Sonny is in an orange shirt and brown vest. Cher is in a brown dress with cut out sleeves and an ornate white trim. Cher wears a thick ponytail and does a good whoop or two. Sonny’s wearing an interesting belt or hip ornament that hangs and swings around. And while Cher’s off doing her slow bit in the middle of “Suspicious Minds,” Sonny's really smiling about something. Which is suspicious. Cher grabs his hand at the end. 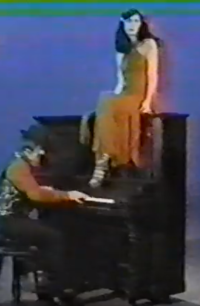 Cher is in the criss-cross dress now with the barrette in her hair.

- Greta Garbo
Sonny plays Valentino to Cher’s Greta Garbo. She wears a great wig and jewels and keeps saying, “I vont to be alone!” I have a star by this one.

- Queen Alexandria of Russia (Video)
This opens with a big Russian dance number. Cher is super-jeweled up and her hair is in a very pretty elaborate set of buns. Loren Greene plays Rasputin and Sonny plays Nicholas. Cher cracks up with Lorne, Sonny and Cher crack up a lot. Watching it again I cracked up too. They make a kaputnik joke and this is a good example of how their mess-ups where funny and endearing. 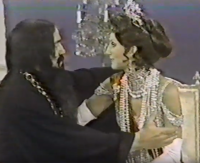 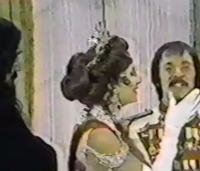 I Got You Babe: It seems they’re wearing the orange outfits from episode #10. "Ours not to reason why, ours but to do and die." Alfred Lord Tennyson

Highlights: In the war of cultures, Cher consistently wins. In the battle of the sexes, Cher gets the trophy almost every time. This is significant. Cher does a good impersonation of Garbo. It seems like relationship things are percolating in this episode.