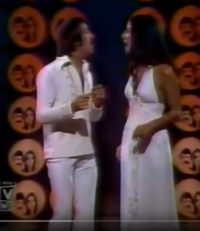 Sonny & Cher are wearing all white outfits, Cher with a macrame front. They come out holding hands.Sonny makes Cher giggle. He tickles her. They seem good here, couple-wise. Sonny’s wears a large-collared shirt with trim. His necklace horn of Sicily is showing. He fixes Cher's hair. They seem very affectionate. She has a little curl in her hair and her nails are long and red.

Banter:  I notice that Sonny liked to twist his wedding ring during the monologues. Is that a sign of something? Sonny says it’s his anniversary. Cher says their anniversary is in October. Sonny says he’s on an organic diet. Sonny says he feels like a new man and Cher says, “Amazing, so do I.” Cher’s got her arms crossed when Sonny talks about how great he feels and looks. They playfully use the word “pishaw.” Cher jokes about his organic elevator shoes making him look taller. Sonny says everyone in his family, including his mother, eats seaweed. Cher jokes about Sonny’s mother’s facial hair.

Cher Solo: “The Way of Love” (Video)
Candles are in the foreground as we pan into Cher wearing a pretty silver dress and a low hair net. I love the old big white mics and the lens flares bouncing off her shoulders. She’s lip synching the song. There’s a big orange light behind her. She licks her teeth. 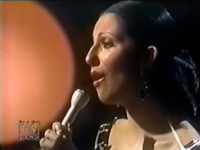 Skit: It’s a 747 plane piano bar with Tony Randall singing “Heart of My Heart.” Steve Martin sits at a table. Teri Garr is also in the sketch. Cher wears a fabulous bun. The joke is Tony Randall is the pilot. There’s a hijacker joke in there somewhere.

VAMP (Video)
Cher’s in a red v-cut dress now with what looks like the lack of a bra and wearing two sparky barrettes. In the middle segment, she reclines. Guest Spot: Honey Cone singing “One Monkey Don’t Stop No Show.” (Video)
You know these ladies from the awesome song “Want Aids.” I am both disturbed by this song’s use of monkey and I also kind of like its attitude. Honey Cone wear unflattering cutout outfits and bad wings. And you wonder if they didn’t make it big because they were larger ladies in an era that celebrated Twiggy. But I like them and they seem the precursor to Jennifer Hudson. The lead singer is Edna Wright is the sister of Darlene Love. Is the set supposed to be “urban?”

Fortune Teller: The machine slot is to the left. Cher talks to Tony Randall and there’s a joke about the gypsy police.

John Wilson Cartoon: “Brand New Key” (Video)
Cover of Melanie, 1971
This song and cartoon captures Cher’s childlike side. There’s a very unfortunate part of the cartoon where Sonny’s cartoon altar ego slams into a light pole and sustains what looks like a cartoon head injury. Cher also has an accident on her bike in the cartoon. But there’s a sweet part when she sings “I done alright for a girl” and other girls give her fan love. There’s a depiction of Sonny’s mother as a heavy Italian women. I don’t think she looked like this. By the way she lived to see Sonny’s funeral. People have tried to explain to me the roller skate key thing but I still don’t get it. 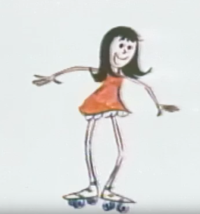 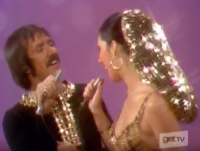 Concert: “We’ll Sing in the Sunshine/You Are My Sunshine" (Video)
Cover of Gale Garnett, 1964 and the American folk song, origins unknown, first recorded in 1939

Cher is in a gold plaid dress with a big shiny gold hair wrap and small hoops. Sonny is in a Vegas-Elvis looking black and gold jumpsuit. He does hip swivels and Cher hangs her hand. Cher belts it out and Sonny does an air guitar. They look like they’re having a good time and poking each other. Cher’s makeup in the early days was too much. Very shiny too. Apparently it ruined her skin. 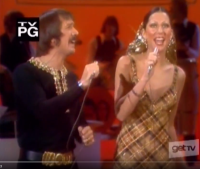 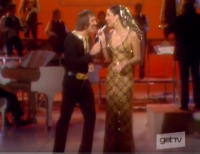 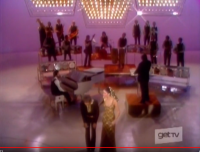 Cultural Spot:The Student Prince opera (Video)
Freeman King introduces the skit from the balcony of a theater. Steve Martin and Teri Garr are prominent in the chorus. Tony Randall is Frederich Von Rotten returning from the front to marry Cher but she’s already married a common miller, Sonny, and had a mustached baby. They sing contemporary songs.

The songs are “Can’t Take My Eyes Off of You,” “Splish Splash,” The Great Pretender,” “Stop in the Name of Love” and “Blueberry Hill.”

Cher looks lovely in curls and ribbons and cracks herself up doing the German accented pop songs. Randall shows off his singing skills. The chorus all says “bravo” and Freeman King says “right on!” 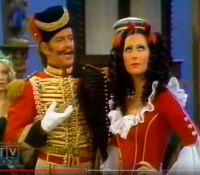 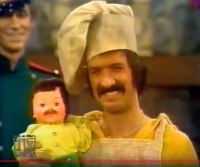 Good pics of Steve Martin and Teri Garr, each with Tony Randall. 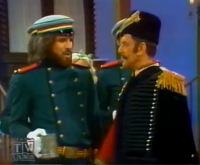 I Got You Babe: They say goodbye and don’t sing. They’re in spring, yellow outfits from another episode. Oh, the humanity.

Highlights: This is one of the first episodes that’s pretty good all the way through. The show seems to have discovered what works, dropped what wasn’t working and Sonny & Cher seem on-point through all of it.