Cover of  The Rascals (1969)
Sonny & Cher are in white outfits and come out holding hands. Cher is in an all-white dress with skirt fringe and fringe on one arm. Sonny wears an orange shirt and white jacket. Cher’s hair is in curls.

Banter: Sonny & Cher do all their signature moves. Cher has her hand on her hip, does a very dramatic hair flip, gives her deadpan look, has her arms crossed. Sonny does the shoulder punch and a lot of pointing.

There's a sex joke, a short, Italian joke, a nose joke. They talk about the art of self control. We find out Cher has just been named one of 10 best dressed women in American by Mr. Blackwell. This was a small moment for Cher and Bob Mackie because in the 80s very often Cher would hit his worst dressed list. We can see Cher has more confidence now and there are many moments of naturalness.

Remember in the 1970s when to call someone “uptight” was a popular insult. Cher gets Sonny laughing. The stage bubbles shake. 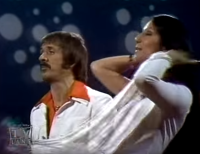 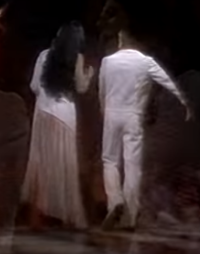 Skit: Jean and Cher dance in second-hand dancing shoes. Cher wears a pink dress with a collar frill and a big bun. Jean will be on the show again with Lyle Wagoner and in 1979 appear again with Sonny & Cher on the Mike Douglas show. At this time in television history, All In the Family was the new smash hit and taped at CBS in the same building as The Sonny & Cher Show. Jean tells Cher “you sing beautifully and always look nice and have a great sense of humor.” They make a joke about cheap producers and a reference to Margot Fonteyn.

Cher wears a purple dress, a purple head wrap and sings to a red-orange moon. Her dress has a gargantuan arm ruffle and a long train. She sings “soul-ah" and throws out sultry faces once in a while while the show perfects angles on Cher vis a vis the big red moon. (click to enlarge) 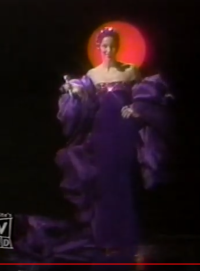 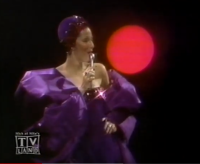 You can also tell Cher is starting to look very thin. 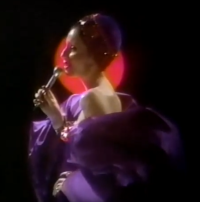 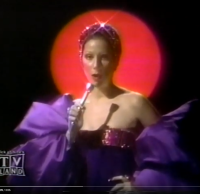 Fortune Teller: With Sonny and Mike Connors. My notes have a star next to this one. While I was looking up Mike Connors, I discovered he is also Armenian. His real name is Kreker Ohanian (which rhymes with Armenian!) and he is considered the first Armenian star. Sonny makes Cher crack up during this skit before she robs him of fifty bucks.

Skit: This skit also has a star next to it and is called "Meet the Candidate." Mike Connors plays Frederick Leonard, and Independent candidate running for office in California. Jean Stapleton plays his drunk wife. Freeman King plays their stunt friend, their “black friend” who, it is revealed, is really their butler. Although this may seem like heavy-handed, obvious criticism-comedy here, Sonny & Cher were dealing with racism on their show right away and very often. These jokes were new back then and confronting audiences soon after the turmoil of the late 1960s. Jean wears a great dress. She’s brilliant as the uppity wife. Her earring falls off in the skit.

Skit: The first Daytime Bono Awards. This was a recurring skit where the show gave out fake awards (in the likeness of Sonny) and in a snarky manner to comment on TV trends, like the plethora of deaths in the plots of soap operas with a nod to General Hospital. Sonny and Cher appear in scrubs.

Jean also spoofs The Galloping Gourmet. Cher plays a house wife. Mike Connors is the perfect announcer with fake teeth. Lyle Waggoner will take this over this role in a few years. Teri Garr wins an award for the “most cooperative contestant on a dating game show.” She’s made to look pregnant. This was probably hilarious before MeToo. Cher plays a red head with big boobs and wins for “most consistent answers on a talk show.” The winner for best song is called “The Secret Search for the Edge of the Turning World.” In the end, Cher wears a great dress and gives a speech.

Fake Solo Spot: They fake out to a Cher solo but Cher drops the conceit and continues her awards speech which is a commentary on those speeches that drone on too long.

The "United We Stand" song was on their new album. They would go on to sing this song again in 1979 on the Mike Douglas Show, and two more times on their own shows, every time in a medley with Harry Nielssen’s "Without You."

Cher wears a curly, shoulder-length wig and they sing to each other. You can see, early on in the song, Cher's eyes for Sonny. The medley has a gritty interlude and Sonny does his air ukulele thing. Cher wears a lot of makeup and a striped, purple dress. Sonny wears a pink shirt and a purple vest. 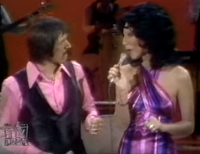 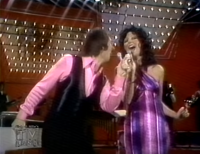 The Myth: We get another origin story here beginning in an homage to Carol Burnett’s opening Q & A sessions to introduce the new origin story. Cher wears pigtails. Sonny meets her delivering pizza. Jean is Cher’s mom, kind of seemingly a momager. Mike Connors plays their music career manager. They play themselves as 60s singers, singing at their prom. Teri Garr plays a fan. Sonny is seen quickly writing hits, "IGUB" and "The Beat Goes On." Mom is always there. Las Vegas sees them as glammed-up stars singing "All I Ever Need is You." Mom and manager react to S&C on TV. Cut to their house, so much money and “50 million fans.” Obviously this is far fetched, stereotypical and yet simplistic. But part of Sonny's existing methodology of providing behind-the-scenes, get-close-to-the-fans. But these variety show myths offer an opportunity to reveal without any real reveal. In reality, they met after dropping out of high-school.

I Got You Babe: A simple goodbye with no song. I didn't note what they were wearing.

Get TV scraped the Cher/Jean dance and Meet the Candidate.

Highlights: The racial critique in Meet the Candidate, the open sequence packed with all their signature moves, the first installment of the Bono Awards.