Opening Song: “Can’t Take My Eyes Off of You” (Video, better picture) (Video with full banter)
Cover of Frankie Valli and the 4 Seasons (1967)

These are the same outfits from episode #12! Shocking! Lots of eye contact, whoops, making fun of Sonny’s moves, pulling hair from Cher’s face. Cher has some solid hoops on her ears. She’s showing more confidence and look very tan.

Banter: Lots of fake punching. Sonny says he was great tonight and that this is their 8th show so they must air out of order. He says he’s already become a household word. Says he’s like an old Italian wine and aging well.  He talks about how he turns women on like Tom Jones (Cher makes a Tom Thumb joke). Sonny says he’s been exercising so no bully can kick sand in his face. Cher jokes that she was the bully that kicked sand in his face. He says physical fitness is important to him. Cher keeps laughing. He pulls out his weight chart. Cher takes it and makes a height joke. He says “you folks should see me without my clothes on.” They do a sexual innuendo joke. Cher says, “If you got one, I’m surprised.” Cher makes Sonny laugh. Sonny says he’s taking up skydiving and Cher says there’s too much pollution as it is. Sonny complains about all the “zaps” and says the only thing Cher exercises is her nose. “How’d ya like that, Streisand nose.” Double burn to two women. Then she coos that she loves him, calling him “sweetheart, precious.” Which today sounds a little too Gollum from Lord of the Rings. 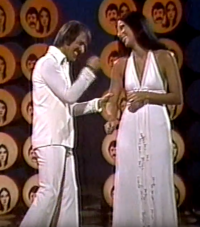 After they finish the song, Art Carney comes out. Sonny worries about the set opening up to let him through but it does. Cher tells Carney to shake hands with Sonny and kiss her. Carney gives Cher lots of compliments and doesn’t give Sonny any. Sonny give his peeved stare to the camera. He gets good at doing this in later episodes. Cher is delighted.

Skit: Sonny is at a piano. Cher is in her outfit from the Two of Us compilation album, which I think may be the same outfit as the front of the All I Ever Need Is You album. She’s wearing a ponytail. Sonny is in a tux. Cher introduces him with “the short voice of Sonny Bono” and Sonny pretends to play the piano. Art Carney pretends to play the piano a bit aggressively. It might have been a funny skit because I starred it.

Cher Solo: "Aint Misbehavin" (video)
Cover of the Broadway song popularized by Leo Reisman and Orchestra in 1929.
Cher wears one of my favorite Cher dresses, her All I Ever Need Is You back cover dress, the gown with white fringe and sequins. She wears star earrings and licks her lips, hangs her hand, puts hand on hip, all the good stuff. She has a big bun going on with spiral braids jetting out. Great solo. She looks and sounds great. There's a white background instead of black and some double image camera work the show was known for pioneering. I also got a screen grab of her scandalous belly button, a mid-lip-lick, and her marvelous manicure. 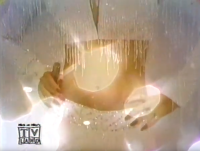 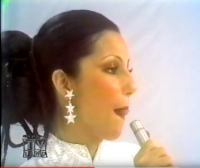 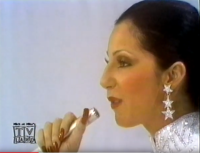 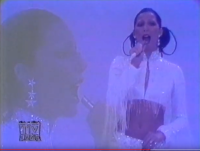 Skit: Sonny’s back at the piano and Art Carney won’t stop playing. Sonny kicks out a leg of the piano.

Army Life
This seems like an alternative the show tried for the VAMP series, this one centering around Sonny. Cher leads chorus girls in gold suits and top hats in front of an Uncle Sam cutout. Cher taps a little and is surrounded by blondes. I starred this too.

I Got You Babe Skit: This is the skit with young kids (a big CBS demographic at the time) Holly and Eddie Farber. Eddie wants a baby. Their apartment is very early 1970s modern looking and reminds me a lot of the Mr. and Ms. set from their 1977-78 show. The couple is very lovey-dovey, with Cher in long pig-tails. I don’t really love this skit. 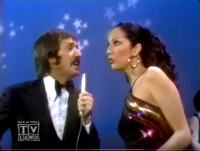 Sonny is in a tux. Cher wears a gold and purple gown with a large curled pony-tail extension and thick gold hoops. Cher sings “eating up inside, boy” which is different from the song on the All I Ever Need Is You album where Sonny sings “eating up inside, girl.” Lots of Sonny’s whoops. Lots of Cher’s cool shoulder-shakin’ awesomeness. Overall great duet and they’re having a good time. 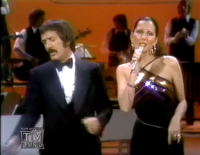 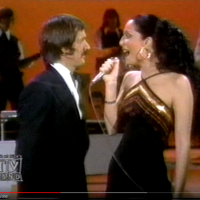 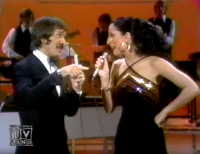 I got some band shots, too. 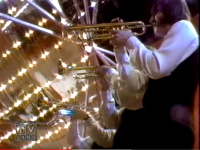 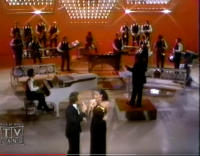 And these shots which show a united couple.

Cultural Spot: The Political Follies of 1972, a burlesque, vaudevillian, Vegas take on current events. Sonny mispronounces halcyon. The dancers wear red, white and blue bikinis and topics include the Nixon vs. Humphreys debates, all with sexual innuendos of course. Most interestingly, Sonny plays a Senator from California (I kid you not he’s a democrat in this skit). Ted Zeigler and Murray Langston do a political “Who’s On First” routine, Terri Garr tries on a German accent pre-Mel Brooks’ Young Frankenstein (1974), and Cher comes down on a moon with a big feather headdress predicting her later-day arena concerts of the 2000s. This skit predicts everything!

I Got You Babe: They're wearing different outfits: white and yellow. Boo.

Highlights: Sonny & Cher are enjoying the banter dialogue and the concert number, the show provides more commentary about racial issues, there's a great solo number. The Cultural Spot predicts Sonny’s political future in the late 1980s/1990s and Cher’s descent from the heavens precursors her fabulous descents as a later-day arena concert performer.