Opening Song: "Eight Days a Week" (video)
Cover of the Beatles (1964)
Cher is wearing her long hair in front probably because the boob panels made the censors nervous. Both are wearing white outfits. You can see Sonny’s Sicilian horn (the necklace! the necklace!). Cher's earrings are hard to see. Cher goes into a solo ("I am a torch singer baby/and I know how to burn my candle at both ends") that makes Sonny nervous. She slaps and wiggles her butt. They do some of their live album banter reworked. ("Hold it! She's the mother of my child.") Cher invokes The Cher Show as an idea. Sonny says, "Save the fertility dance until we get into the tee-pee" purchasing on Cher's perceived Indian heritage. Cher retorts, "The only thing in this tee-pee is a wooden Indian." They talk about the musical term “once more with feeling” and Sonny goes through some of the Italian musical terms and Cher makes an Italian joke. Sonny says, "I happen to be the musical genius in the family...I know Cher has better pitch, a more pleasing tone, a deeper voice than I do." Cher says, "Truman Capote has a deeper voice than you do." Questionable jokes in the new era, for sure. But the Indian joke particularly gives the last laugh to Cher, which is a progressive gesture. She takes no guff.

Cher makes fun of Sonny’s pronunciation of music. Sonny says, Cher's lack of knowledge about the technical side of music has hurt her singing a lot. (There might be some accidental truth to this). Sonny turns this into a joke about "her obligators just aren’t big enough" and they crack up. He means her boobs. Cher talks to Sonny during the audience claps. He seems to be making fun of her new jaw punch. Cher asks Sonny if he knows what the musical term buffo means. He says "the classical musical fool." She ends by saying "I married one." This is an interesting monologue, not dated particularly well, but indicative of the jokes they would be remembered by. You can see her full dress at the closings of the segment. 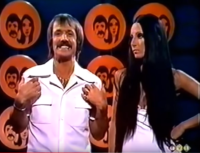 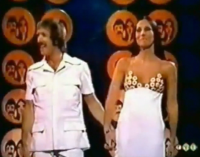 Skit: Sonny & Cher introduce this sketch in the outfits they wear when they introduce guests. Cher is in a purple dress with a tight bun. Sonny is in his black suit. Cher surprises him with Ralph Edwards and a This is Your Life moment. When Edwards asks "who's voice is this, Sonny" there is no voice. Nobody showed up or sent in comments. Aww. Ted Zeigler's voice is heard saying "there's nobody back here. Nobody showed up." Cher offers to take Ralph Edwards to Loretta Young's house where she's selling her dresses. This seems like something Cher would really like to do. They make a joke about doing Howard Hughes on This is Your Life. 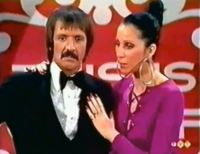 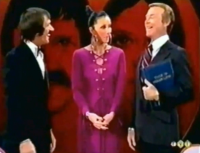 Cher Solo: "As Time Goes By"
Cover of Casablanca Movie song (1942)
The segment opens with Cher in a frame of lights. She's wearing a short 1920s wig with bangs. Her simple black dress has a lot of sparkle. This seems like a more Broadway version of the song. The light is orange. It's very dark. She really belts it at the end. 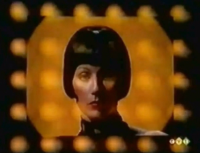 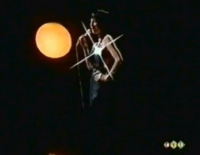 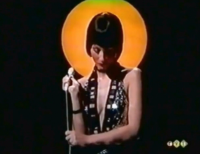 Guest Spot: Sonny & Cher introduce Ken Berry. He does a great tap dance with the drummer. He even does the drop split that killed Prince. Sonny comes on to tell Ken how versatile he is, how Sonny loved F-Troop and Mayberry FRD and how he can dance your face off. There's just one difference, Sonny says, between Ken and Sonny that prevents him from being a superstar. He doesn't now have a show. Sonny says he can help Ken Berry learn to sing. Sonny sings with a dubbed voice. Ken Berry looks around for speakers. Ken offers to try it, sings "The Beat Goes On" and Sonny's voice comes out. Berry even does the Sonny gestures while he sings. It's funny. Sonny says how dynamite that is, how the great singing makes him speechless and he asks Berry to do it again. Cher comes in and slaps him out of it. Berry thanks her and says he needed that. It's a premonition to her famous, "Snap out of it!" moment in Moonstruck. 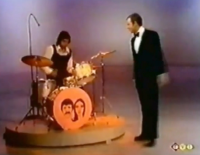 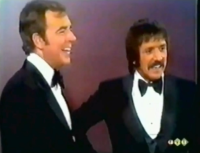 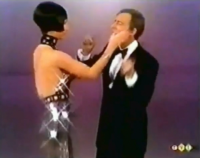 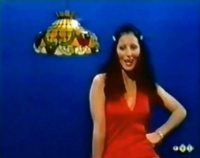 - Salome: Cher starts the scene watering her plants. Ken Berry plays Abdul, the court accountant. He wants to see Salome (Cher) do the dance of the seven veils because he wants to cut costs and have her only use 3 1/2 veils. Cher's headdress is very Las Vegas-like. Cher says she's just washed her veils and can't do the dance. Cher suggests they charge for the dance and then she can see her name "lit up in torches." Sonny comes in asking for Cher's services. She wants to know if Sonny wants her to keep reading about Henry Kissinger's lovelife. Cher tells Abdul to "hold my can, will you?" and she dances. Ken makes a Vidal Sassoon joke because he and Sonny have similar wigs. Some biographies and documentaries have used a still of this sketch (Sonny & Cher talking face to face) so it's weird the episode has not been re-aired more often. 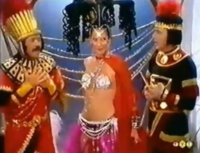 - Marie Antoinette: Sonny & Cher (Marie Antoinette) are making out. Sonny keeps making Cher laugh. Ken comes in to explain to her how the populous is about to break down the door because they have no bread and think she's cruel and self-absorbed. She says, "let them eat cake." Sonny says, "what a famous thing to say." Cher keeps cracking up because Sonny is very into the make out. Eventually Berry eventually reveals that he's King Louis XVI. 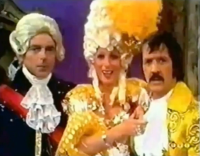 - Sadie Thompson: Sadie (Cher) tells Ted Zeigler to get lost and then she bumps into Sonny three times, forcing him to skirt ketchup on Ted three times. Turns out Ted is Sadie's husband. She declares that "nobody owns me" and offers to give the preacher (Sonny) a test drive or a short term lease. Sonny acknowledges Sadie is the "most sought-after girl on the island," but resists. A second Sadie arrives played by Carol Burnett. They cross bump Sonny while trading barbs at each other. First Cher asks, "Who's he?" Burnett says she's Lily the Philly from Piccadilly.  She says she's with the Peace Corp. Cher says, "look what the tide washed in" and then makes a Tide detergent joke. Burnett makes a nose joke. Cher makes a joke about "sunken treasures...that chest is ridiculous." Sonny gives a long monologue which is shot between the two ladies' hats. Burnett turns to Cher and says Sonny is "awful cute" but no Harvey Korman.

In the final mashup, at the very end, Carol Burnett puts her arm around Cher. 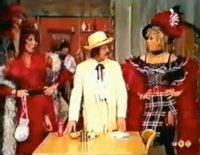 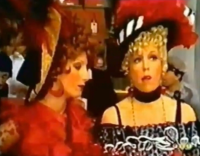 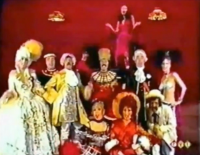 Skit: Freeman King introduces a "look into the future" to see Sonny & Cher in their ripe old age.  He says obviously they're still married because sociologists say Italians make the best husbands. Oy. Let's not unpack that one. The skit pans from a 1972 publicity photo of Sonny & Cher (prominently seen on their Two of Us compilation album). Sonny has a "condition" but he still manages to cop a feel on Cher's ass as she reaches for his meds. Old Ken Berry arrives and they talk about watching The Bob Hope Christmas Special from Mars. They talk about not wanting to watch the President's speech because "she never has anything to say." Wow. Especially interesting since (a) by 2020 we still haven't had a woman president and (b) the show The Simpsons once suggested Chastity Bono up as a potential first woman president (Lisa Simpson ultimately defeating her) in the fictional year 2030. Berry talks about the fun of once being on their show ("except for the dough") and lists all the famous guest stars (Tony Randall, Tony Curtis, Dinah Shore, Art Carney). Sonny & Cher sing a song about nostalgia and do an elderly dance. Ken Dances too. Teri Garr does a walk-on as Chasity grown up as a princess, after which Berry immediately says, "things really have changed." They kid that Chastity is deflecting the advances of George Jessel.  (I had to look that reference up.) It's hard not to consider all the ways in which this alternate future didn't pan out, not the least the way Cher looks and dances in her 70s. 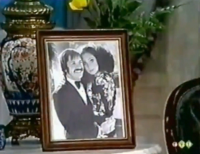 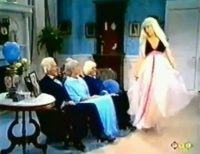 Concert: "Dancing in the Streets"
Cover of Martha and the Vandellas (1964) (co-written by Marvin Gaye)
Cher wearks her long hair with a tiny bun. Sonny wears a pink suit. Cher wears a print dress. Sonny yells, "sing it, Lady!" Cher dances. There's a guitar solo. Sonny keeps singing with his suit coat pushed back and his hand on his hip. It's not dissimilar to what Mick Jagger does, just the hand placement is different. 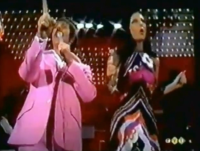 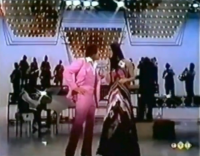 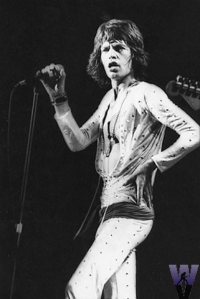 Cultural Spot: a country and western Viking opera called "Home on the Rhone" introduced by Freeman King on the theater balcony with his parents, Dale and Roy. This is another high/lowbrow mashup of an opera fictionally written in 1843 by Tennessee Ernie Fjord. The opera is full of cowboy songs like "Yippie Ki Yay," "Back in the Saddle Again," "I Walk the Rhine" and "A Boy Named Sue." Sonny is Sue. Cher says, "Funny, he doesn't look Sue-ish." Cher is called a funny looking Finnish fellow.  Steve Martin gets some lines. Sonny's voice is dubbed. Tehre's a Ford/Fjord joke and some interesting cutting at the end. 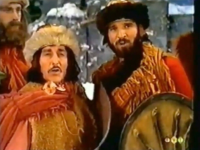 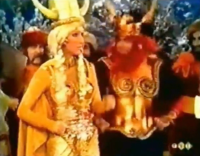 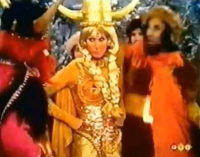 I Got You Babe: No song in my copy.

Highlights: This is a very funny, good episode. It's too bad it's never been re-released. The banter is good. Ken Berry does his best dancing for the show. There are some funny skits about Sonny's singing and popularity. And the Carol Burnett appearance in Sadie Thompson is classic TV. Cher slaps pre-Moonstruck. We see what Sonny & Cher are estimated to look like in old age.