Opening Song: “Gotta Get You Into My Life” (Video, song only)
Cover of the Beatles (1966)
Is it me or do they wear white a lot? Sonny is in a white suit with green shirt (and prominent Sicilian horn). Cher is in a white dress with polka dots and a large white bracelet. You can see the dress seams. When everyone talks about Cher’s amazing gowns on the show, it couldn’t have been these early shows. They’re mostly polyester summer dresses. (I wrote those notes years ago and on the 2019 DVD TV releases from Time/Live, Cher coincidentally talks about this one white dress they borrowed from Carol Burnett and had to reuse a bunch of times. She said they had to work with it over and over and kept updating it with embellishes, like polka dots).  Sonny is very exuberant, shouting, “Sing it mama!”  Sonny points, Cher hangs her hand and does some good hair flipping at the end.

Banter: Sonny compares himself to a finely tuned race car. This is a common setup: Sonny bragging about something and Cher taking him down a peg. The terms “one for the Indian” and “honest Injun” are spoken. Not too PC for today. I think part of this being okay back in the 1970s had to do with the assumption that Cher was more Indian than she is, like fully American Indian. (But then we get into the whole blood/racial quotient and that’s not a great conversation to be having.) But the point is, it seemed different when Cher was in charge of the joke, as a member of that community. Turns out it was a stretch and therefore problematic but it flew by then and didn't seem to overly offend. She also says “heavens to Betsy, no” in this banter, which is also a saying she uses on the 1971 Live album. I’d never heard this saying before or from anyone else. There’s a dwarf joke, a car joke and the obligatory sexual innuendos. 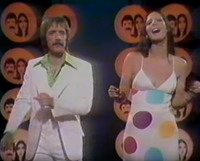 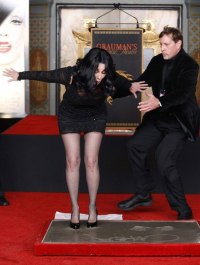 Skit: Sandy Duncan and Cher are sitting on a park bench and are approached by “Hollywood Prince,” Burt Reynolds. Now I used to assume the cameos on this show were just skits cut from earlier episodes. But this skit puts that into question. Did Burt Reynolds come back to the set this week to film this cameo weeks after his previous guest appearance? Was he working on something else at CBS Television City and kept dropping by? Cher is wearing a flower print dress and a bun of braids and they talk about Hollywood fairy land and Cher not being asked to put her hand prints in cement. This is, once again, the show’s eerie fateful foreshadowing of Cher actually getting her hand and footprints in front of Grauman’s Chinese Theater in November 18, 2010. Sonny friskily attacks Cher at the end of the skit.

The creation of Cher's famous footprints was remarkable in that she almost fell into the cement and she wore a dress too short for kneeling. Comedy ensued.

Cher Solo: “The Man That Got Away” (Video)
Cover of Judy Garland for “A Star is Born” (1954)
This is a lackadaisical but adequate version. Cher’s headband and dress looks like they're from the second (brighter, shinier)  dress used to introduce the VAMP sequences.  There is a big red light behind her. She has a curly wig and we see her belly button again, albeit obliquely. And she does the lip lick. This song is defined in Wikipedia as a “torch song” or “a sentimental love song in which a singer laments unrequited or lost love,” derived from the term “to carry a torch for someone”…and Wikipedia calls it "more of a niche than a genre” straying from traditional jazz and relying “upon the melodic structure of the blues.”

At the end of many of these solo clips, Cher looks down at the end.

Cher would sing this song later and much grittier on her 1973 standards album, Bittersweet White Light, and is one of the 25 covers The Boston Globe singled out as exceptional. She got no credit for her performance on the album back in 1973, this situation being the very definition of "before your time."

I Got You Babe Skit: Holly and Eddy babysit Sandy’s sheep dog while she’s out of town for a modeling gig. We see the inside of their closet and their tiny couch.

Concert: “I’m Gonna Make You Love Me/My World is Empty Without You” (Video)
Cover of Diana Ross & the Supremes and The Temptations (1968) and The Supremes (1965)
Sonny is in a bow-tie and black suit, Cher in rainbow-skirted black-topped 1920s flapper outfit and wig with a barrette. Where the hell is her hair??? There's lots of touching. Sonny is all smiles. I love that wacca-wacca sounding 1970s thing.

Cultural Spot: A roaring 1920s gypsy opera. Ted Zeigler plays a drag gypsy fortune teller. Sandy Duncan and Cher play two sisters competing for the heart of the gypsy King. If the King chooses incorrectly, the drag Ted Zeigler warns, the town will be cursed. Teri Garr does some dancing and they sing “Gypsies Tramps and Thieves” with different lyrics. Sonny enters and someone says “that must be the curse.” Bruce Cutthill is an opera singer credited in the skit. I can’t find any reference to him online.

IGUB: Chastity appears with them.

Highlights: Cher lamenting her hands not being in the Hollywood cement and Ted Zeigler doing drag.