Opening Song: “The Beat Goes On/It Don’t Come Easy” (Video)
Cover of Ringo Starr (1971)
The show did this same mashup on episode 1. The color scheme is red and white. Sonny is in a vest and Cher has grape bunches glued on the front of her dress. Maybe this is the ever-modified Carol Burnett dress. Sonny likes the grapes; he puts his arm around Cher. They sing “hot pants are the current thing, uh huh” to make the song more contemporary. Sonny yells “sing it, Lady!” Cher does hair flinging.

Banter: They joke about Sonny's garlic pizza breath and Sonny makes a big nose joke. Sonny runs around the stage laughing at his joke, which makes Cher crack up. Sonny says “one for the goombah.” According to producers Bearde and Blye, Sonny said “goombah behind the scenes too. They talk about the quality of Sonny’s clothes and my notes say they talk about Cher’s being voted one of the best dressed women (was it by Mr. Blackwell or did he only do worst dressed lists? Cher would go on to be on his worst dressed list all through the 1980s and beyond, winning his top spot in 1984 and 1999. In any case, this bit is cut out of the linked clip above.

Skit: George Burns talks to Sonny who is a fan. They make a reference to Griffith Park in L.A. Sonny botches his lines. Burns says he’ll come back to the show in 1992. This will be around the time Cher is singing “Save Up All Your Tears.” Sadly, he didn’t make it. But this was before his big comeback with John Denver in the movie Oh, God! Teri Garr played John Denver's wife in that movie of 1977.

Cher Solo: “You Made Me Love You” (Video)
Cover of Al Jolson (1913).
Cher wears a big hair net and a big white coat. She does her lip licks. This is also a recycle from the first episode. There's a big yellow light behind her and camera lights flare off her netting. This is a gritty, jaded-sounding version of the song. 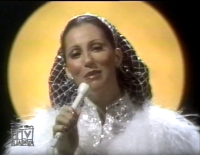 Vamp – Her dress is still the first darker red, slip dress with her curly hair and a tiara. Sonny’s fake piano playing makes me laugh.

Skit: George is a bartender (video) who gives Sonny & Cher, two singles at the bar, advice on love and being the straight man. The gay hairdresser joke gets a huge laugh. Sonny wants a girl who makes pizza with anchovies. Cher adds pimento and Sonny is hooked. Cher makes a quizzical look that reminds me of her scene eating lunch with Jack Nicholson in Witches of Eastwick. The show's makeup is starting to affect her skin. I liked the skit according to my notes. 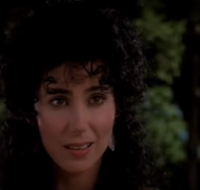 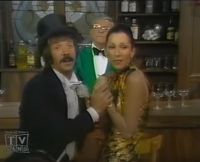 Concert: “Two of Us/We Can Work It Out” (Video)
Cover of Beatles (1970) and (1965)
This mashup, too, is a repeat of episode #5. It's not the best version they did but a good version. They're wearing coral and white. Cher wears long hair with odd little back bun. The low angle shots are kind of like a kid cam.

Cultural Spot: It's a Gilbert and Sullivan-style spoof The Autobiography of Howard Hughes by Clifford Irving, a notorious literary hoax. The book was published in 1971 and the hoax was busted in January of 1972 by Howard Hughes himself in a rare phone call. Freeman King goes into satirical stereotypical black-speak at the end. Steve Martin's in sketch. I thought Sonny actually sang his parts well. But the cast jokes that he "murdered that song." Cher, as the mystery woman, sings “Alias. You can see her makeup giving her chin acne. This is a good opera, my notes say.

IGUB: The buggles wiggle when they leave.

Highlights: In the 2019 Time/Life collection booklet, they talk about Cher playing strong characters in VAMP sketches but there’s actually more to it. The style she was given to play was usually femme-fetale, the woman come in to cause trouble, to ruin the man. In 1930s and 40s movies, this woman would consistently fail to forces of good. Cher receives no such comeuppance and always conquers. She is always the last man standing, starring into the camera. Some very powerful girl power, undercutting the so-called "male gaze."

This is also a thrifty show: less than 20 episodes in and they’ve recycled two opening numbers, a solo number, two in-concert numbers and an opening outfit.