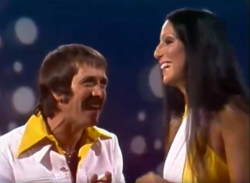 Opening Song: “Get Ready” (Video)
Cover of The Temptations (1966)
Again, they're in yellow and white, Sonny in a white jacket and yellow shirt, Cher in criss-cross yellow and white pantsuit. They are still smiley and flirty and Cher's hair looks great. Sonny seems almost hyper.

Banter:
Sonny brags about his singing and could have been in musicals. Cher says the Wizard of Oz needed a little Italian munchkin. Sonny tells Cher she’s being a tart. Sonny accuses Cher of forgetting lyrics. Sonny admits Cher sings better but says he has a photographic memory inherited from his mother. Cher says "an elephant never forgets." She makes a Cleveland joke. Cher mocks his hand gestures. Sonny says she resorts to personal attacks when she's losing an argument. Cher brings up all his nose jokes.This is where he yells "Cher! Cher! Contraire Cher!" Then he sets up a big nose joke and falls on the floor laughing. This makes Cher laugh and you can really see the pantsuit here, big legs! Sonny shakes his fist at Cher referring to the joke, says "He's getting her tonight" and of course Cher retorts, "That's what you think." That gets a big laugh and she teasingly punches his chin. Her last joke is that Sonny's photographic mind "never developed." Cher flips her hair and rocks her shoulders. Sonny yells, "Take it, mama!"

Cher Solo: “The Way of Love” (Video)
This is a song from Cher's recent solo album, Cher, of 1971. She wears a pink dress, more frilly but not unlike the dress on the Cher doll of 1977. She wears a big pink flower on slicked-back hair. It almost looks like the flower is attacking her head. There's a big orange light and camera flares. They play with double exposures. She sings this live and it's a good version. She holds the mic back when she's not using it; very cool! 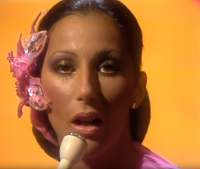 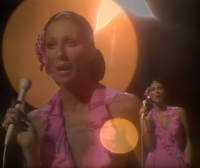 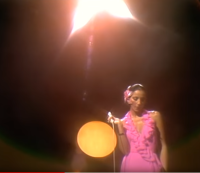 Skit/Music: The Sonny & Cher Stomp (Video)
This is a very meta,  full dance production where the cast and dancers impersonate Sonny & Cher with 5 couples of Sonny and Chers (including the originals) in orange fringe and yellow shirt outfits (dubbed the "hippie and the shrimp") doing the exaggerated impersonators Sonny, and especially Cher, were becoming known for: Cher folds her arms and stares, Cher hangs her hand, Sonny points, Cher’s hand is on her hip (this was done really well in their episode of Scooby Doo), Sonny socks Cher’s arm. The lyrics of the song mention a "pizza parlor dancing to the “goombah beat” and “all the people in the tee pee are stompin' their feet.” They're pretty funny impersonations but all impersonations of Cher always remind me of the Ben Folds Five song, "Best Imitation of Myself." 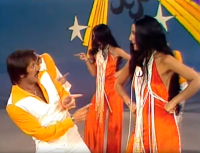 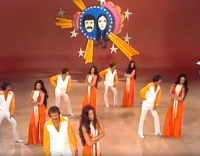 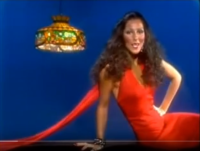 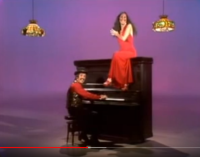 - Bonnie & Clyde: Cher & Merv are a very cute 'Bonnie & Clyde. Merv talks bout being in jail…nothing but men, men, men. Theres later-day irony here or possibly the show’s inside joke Merv was happy to oblige. Cher talks about using her feminine wiles to get him out of jail. They do a joking embrace. Bonnie shows him how to load his gun. Very double-entendre, too. Cher has bi-lateral hair. Sonny arrives and Cher undresses him. They crack each other up. The show leave in the mistakes and goofs. Producers Blye and Bearde talk about this in the Time/Life DVD interviews, how it was funny to see two rock and rollers screwing up op on a variety show. After all, this was before Reality TV. How ironic that folks in CBS Television City considered Sonny & Cher rock-and-rollers when roll-and-roll decidedly didn't. 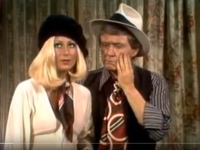 - Theda Bara: I starred this one. Cher is wearing Mae-West-like "Take Me Home" breast plates. Sonny is a sheikh kissing Cher. Cher says "Oh, Sheikh," like "Oh, Shit." They make a little Italian joke. Lots of men come out of urn. She’s hiding them men halfheartedly, not really hiding, her promiscuousness. They make an Arthur Treacher joke. 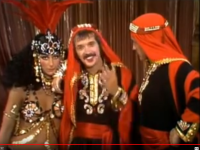 - Sadie Thompson: She's still a red-headed. Merv is the new governor and he's against rum and/or gin, a teetotaler come to clean up the town. Cher rubs up against Sonny and tickles him. The skit is full of sex jokes. Sonny laments that Sadie can’t change her ways. Sadie tries to convince the governor that everyone who looks tipsy at the bar really has jungle fever. Sonny says Sadie can talk herself out of anything. They're using the pizza parlor lamps. 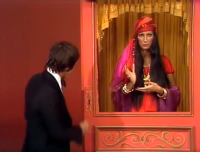 Gypsy Fortune Teller (Video)
Cher is in a purple and red outfit. He puts his quarter in (left slot) and no matter what he asks, the fortune teller responds, "You are short." Merv does the same and ends up with Miss Universe. Sonny surmises he was one quarter from Miss Universe in a swim suit. Sonny hopes for Miss America. He says, "Even Miss Burbank would do." Sonny is wearing some amazing platform shoes in this sketch. 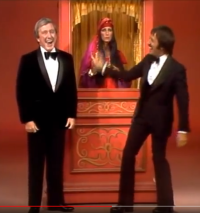 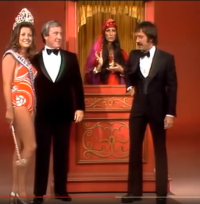 Video: Sonny singing “For Once In My Life” (Video)
Cover of Stevie Wonder (1967)
A video homage to Chastity, full of pics of Chastity and Cher playing at home, Chastity running into Cher's arms. This is pure Reality TV and I looooved it when I first saw it. Great video. But I did always wonder, when Sonny mentioned only 3 members of the "Bono Brigade" how his prior daughter felt about it, or if she was happy to stay out of the limelight, like the elder-Osborne daughter. 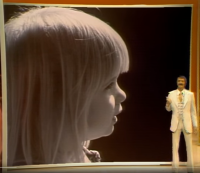 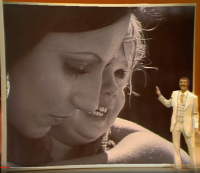 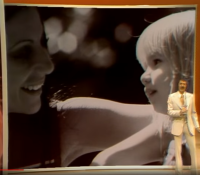 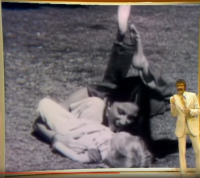 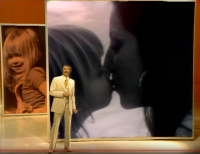 Concert: “A Cowboy’s Work Is Never Done” (Video)
A Sonny & Cher original from their recent All I Ever Need Is You album (1972)
This is all lip synch. Sonny wears a tux and Cher wears a black halter dress with a bobbed wig. Cher seems too thin, you can see her ribs. Sonny doesn’t have much to do but look tough. 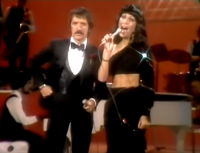 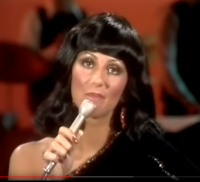 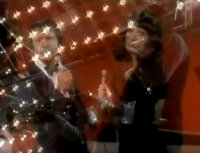 Cultural Spot: Musical instruments warm up while Freeman King introduces “Vlada the Horror" with a good example of his satirical black-speak with “Tell it like it done was.”  This is a Russian opera with, according to the TV.com notes, a “Xavier Cugat beat." Terri Garr and Ted Ziegler play the Count and Countess. There's a unibrow joke. Cher is their heiriss daughter and she wears a jewel on her check. There's a David Frost joke. Cher loves the cook, Sonny. Steve Martin comes in with news of the revolution.

GetTV cut out the Cultural Spot.

Highlights: The Cher and Chastity "reality tv" video because every insight into the lives of Sonny & Cher was a joy. The Sonny & Cher Stomp is a great meta performance of self-awareness. Re-reading Merv Griffin’s Clyde performance in light of his protected homosexuality. The "Take Me Home" breast-plates pre-dating Cher’s Viking Warrior outfit of 1979. Cher’s unapologetic sleeping around in the Vamp’s Theda Bera sketch.