Not much video exists online for this one.

Intro: Sonny sings “Nobody Knows the Trouble I’ve Seen” around a dialogue with Ken Berry. 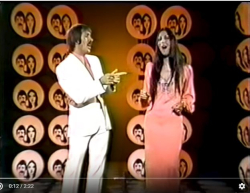 Cher is wearing a pink polyester dress, loose-fitting for her. And Sonny is in a white and pink suit.

Cher comes out looking unsure. In some ways, this episode feels the most green of the early ones. You can hear Sonny yelling “Sing it lady!” during the song. Sometimes I think that's sexy. Sometimes not. So bossy. But Cher belts it out. The stage still feels small, with the white globes boxing them in at the sides. Cher is very tan and wears big turquoise necklace and earrings. The pic to the left shows the classic Sonny pointing at Cher. Cher does her hanging hand here. This will become so much of a trademark move for her that in 1977 her Mego dolls comes with the ability to turn the hands down at the wrists. Wow, the technology, huh!? But there was a structural flaw and most of the hands would fall completely off after too much hand hanging. I have a few dolls in my collection without hands. Luckily this never happened to the real Cher.

Banter: Sonny says Cher left a big mess in the dressing room and Cher makes a fat mother joke. We get more double entendres and Sonny talks proudly of eating garlicy Italian food as a way of life. Sonny calls his Dad Toulouse Bono for some reason that I didn't write down. Cher makes short jokes about the dish shrimp cacciatore. Cher is great at dead pan. The seam physically very separate but we know they were on pretty good terms during the first few seasons. The relationship is seeing real problems by the end of 1972.

Skit: Cher sings “Greensleeves” as Sonny and Ken Berry pull out her sleeves.

Guest Spot: Ken Berry sings and dances to “All I Need is the Girl.” I must admit, I’ve never liked Ken Berry outside of F Troop and his are some of my least favorite skits of all the Sonny & Cher shows. He always truck me as too silly and goofy without the necessary charm to pull it off.

Skit: Sonny mimes to Jim Neighbors song “Gonna Build a Mountain” as mountain climbers climb a state set. They push off Sonny from the top and introduce Cher’s solo spot.

Cher Solo: “It Had to Be You”
Cover from various 30s and 40s film stars, the most notable version by Frank Sinatra 1949
This marks the first appearance of that big orange ball of light behind Cher to make the set more dramatic and torch-y. She wears a wrap dress with a hood. Very low light. She sings “Sonny, with all your faults, I love you still.” She looks down after song ends (and will continue to do this a lot after her solo spots end, as if she doesn't know where else to look). In this episode, she staggers off stage (which will rarely happen again). She would sing this later in 1976 in a gold dress.

Guest Spot: Ken Berry does a vaudeville routine with tap dancers trading hats to the song “Take It.” 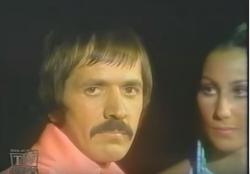 Skit: Cher tries to help Sonny figure out what he’s best at. She wears a white halter but is not allowed to show her belly button yet. She laughs her big crane laugh. Sonny stares at the camera in defeat at the end, which is a common theme/mood for the end of many future skits where Sonny has been defeated.

You can see the end of the skit here: https://www.youtube.com/watch?v=qxZyv3ovSnE 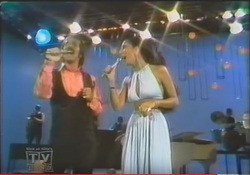 Same outfits as the last skit, a white halter and Sonny in black and peach. 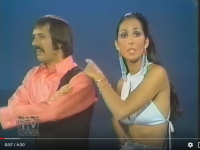 I love the big lights and flares of these segments, the creative camera angles from below and above. Cher wears long turquoise earrings and a silver belt. Cher licks teeth and hangs her 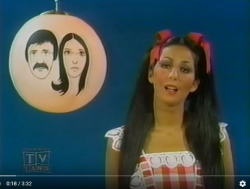 hand. When they sing, they sprinkle in plenty of whoops.

Skit: Sonny, dressed as German composer Ludwig van Beethoven interrupts Cher as she's trying to have an intimate moment with the audience. Cher wears a girly dress. Sonny wants his own solo spot to sing “Mammy.”

This is one of my favorite memories of any of the Cher solo spots as I loved the long pigtails and that farm dress looking thing. These cartoon song videos were very popular and fans remember them as some of the short-form, music videos. 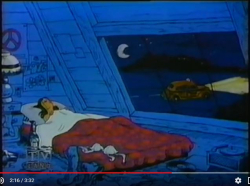 Skit: Sonny, still dressed as Beethoven, has his big chance in the spotlight, singing "Mammy."

The Cultural Spot: A Gilbert & Sullivan style opera mashed up with The Pentagon Papers set to H.M.S. Pinafore. Freeman King introduces the opera wishing he were deaf. But the spot boasts a great set and Cher in a crazy red hat. She still seems unsure of herself at this point. A big theme of the opera is freedom of the press.

I Got You Babe: Sonny thanks the guest, Ken Berry, and for the first time they announce another special guest, their then-daughter Chastity (now Chaz). They call her the president of their fan club and she tottles on the stage. Cher holds her in her arms and Chastity's little hands hang on to lots of Cher hair. They get Chastity to wave and they sing their signature song to her.

Credits: It's shocking to see how low budget the show feels in the beginning. And this episode if overfull bad, short skits with little cohesion and no VAMP!  The Cher Musical was very harsh about the quality of their writing staff. I wonder if this is in response to the fact that the show’s jokes haven’t aged all that well. Although this is a typical side-effect of comedy shows and we have to remember that two of their future writers did go on to have quite impressive comedy careers, Steve Martin and Bob Einstein.

Credits: They have dancers! The Jimmy Dale Dancers. Joe DeCarlo, their manager, is also listed as an associate producer. Ellis Burman does Cher's makeup (too thicky and would cause her face to break out). And in these early shows here hair was wrangled by Garry Chowen.