Opening Song:  “With a Little Help From My Friends” (Video) (Full Show)
Cover of the Beatles (1967)
Sonny is in a white sweater with a sky blue shirt. Cher’s in a sassy white summer pantsuit with a grid of blue and purple polka dots. Her hair is crimped. Rena (who I think became Renata later), is doing some interesting new things with Cher’s hair. Again, Cher is very tan this season. Sonny’s wearing a big grin and he does this look at Cher somewhere between chiding and patronizing. He fixes Cher’s hair and points at lot. At first I think there’s a lot of affection in this performance. But then you notice some folded arms and Cher seems more into the jabs. 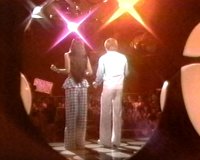 Banter
They do the handshake thing. I never know what to make of the handshake. Is this a sign of anything ominous? Sonny says he was born with rhythm and Cher asks when did he lose it. Sonny says he has been asked to perform at the Nixon White House. At this moment, Nixon is running for re-election (and will win). There’s a sex performance joke. Sonny protests that he’s Italian, hot blooded animal at home. Sonny says Cher was asked to perform the World’s Fair, the Astrodome (remember when that was a thing?) and the Olympics as a javelin. There’s a skinny joke there. This is (incredibly) about Cher’s lack of a figure according to Sonny but hers a slender look that was it-look in the 1970s. Sonny was maybe too old to appreciate it. He jumps off stage again amused at his joke. “Come on, Pal” he says trying to make up to her. Cher flips her hair and hangs her hand. Check out the platform shoes Sonny sports. 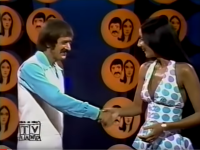 This solo has foliage and an orange bulb. Cher’s in a black wrap gown, part plain and mostly sparkly. Awesome hair. But you can see her bones! Very melancholy end. There’s doubt there in her face. Great end.

Skit (Video: 13:01)
This is another set-less skit that reminds me of season 1 with all it’s prop-lessness. Cher introduces Alexander Dumas’Three Musketeers, which is Jerry Lewis doing Jerry Lewis with pratfalls, yelling and knocking people over. The joke is they want to be 8 musketeers instead of 3. There’s a phone company joke. Jerry returns to try to make Cher laugh at the end of the skit. At the end Cher says, "Patti, I know how you feel." I had to look this up. It was probably a reference to Patti Palmer, Jerry’s wife from 1944-1980.

Better views of the amazing dress. 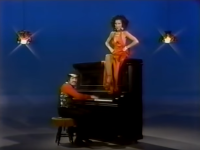 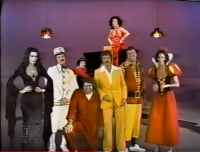 - Snow White: Jerry is a woodsman having an affair with Snow White and while getting caught by Prince Charming (Ted Zeigler) pretends to be the 7 Dwarves living with her. This skit always made me laugh. Lewis eventually exhausts himself and gives up. Sonny plays the milkman Cher married. 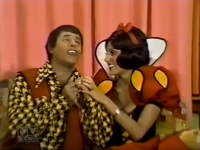 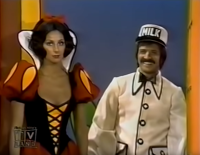 - Vampira: Jerry plays Vampira's TV Repairman. This feels like an early version of Cliff House. Vampira wants to watch her violent TV shows. They make a news joke. Lewis takes a drink that turns his Dr. Jekyll into a Mr. Hyde. This gets a big applause. Vampira was "repulsed by the repairman but she loves Mr. Hyde. Vampira is only dismayed that Sonny is on the TV when it's finally fixed. Lewis and Cher go to bed while Sonny croons a song on TV. The dead guy in the chair comes alive to turn off the TV. 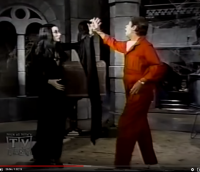 Guest Spot (Video: 30:52)
Sonny in a tux and Cher in a black dress with fabulous jewelry and a huuuge bun introduce the refurbished, Diana-Ross-less Supremes. They lip synch “Your Wonderful Sweet, Sweet Love” This lineup includes Mary Wilson, Lynda Laurence, Jean Terrell, of which Mary was the only founding member. The show does some nice picture in picture effects.

Skit (Video: 34:19)
The most annoying chess partner, Jerry Lewis plays with Sonny.  I starred this. Must have liked it. Sonny is dressed like his character Alvie (long before Alvie was created to be a romantic interest for Cher's Laverne character), as a college professor, hair slicked back. Jerry mugs around, unpacking his pockets, cracking his fingers, smoking on TV. The audience seems to love it. Sonny plays a generous straight man to it. I think a gay joke is made. Jerry brings over a gaggle of friends. Then Sonny coughs and Jerry is outraged. It’s a good skit about narcissism and hypocrisy. Sonny gives his look of resignation at the end. 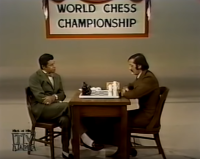 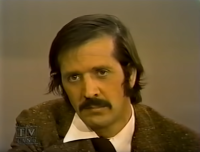 Concert: “I Just Want to Celebrate/Take a Look Around” (Video: 43:08)
Cover of Red Earth (1971) and Smith (1970)
Cher wears an orange African-inspired outfit. This would be seen as cultural appropriation today; but back in 1972, this was seen as providing diversity to television. Cher is smooth throughout this song. It’s a song like this that shows she’s a league or two above Sonny. She’s a natural. The seam between these two songs is hard to notice. These concert segments can get yell-y and this is no exception but it’s the way she moves that’s extraordinary here. I like the way they close and acknowledge the band, the very shadowy band. Headlines in the Papers (Video: 46:19)
Topics of jokes: The Supremes, horse racing, 5 million dollars dropped from an airplane (skit), President Nixon and his contender McGovern, the greedy National Football League (before everyone was calling it the NFL), auto pollution, sky racing, “girls” in the Navy (skit), speculations about things looking up by 1995 (Cher in 1995 to the right) and Bobby Sherman makes a cameo. The Supremes and Jerry Lewis join in. 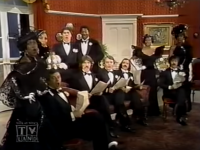 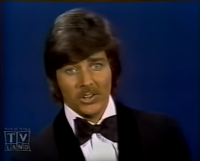 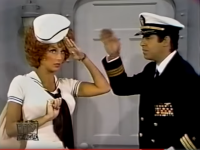 IGUB (Video: 53:33)
Jerry Lewis comes out with them and calls them “nifty” and “neat” and says they have a super producer, director, cast and crew but then he talks about how they’ve restored his faith in television. Cher kisses him and then Sonny kisses him. Cher is on record somewhere saying she liked him as a guest. Sonny & Cher sing after that. Cher mimes Sonny and flips her hair behind her. 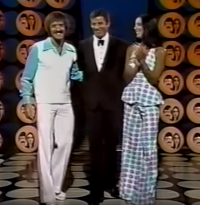 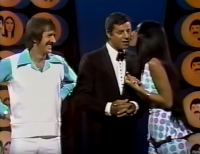 Highlights: Affectionate opening, great solo spot, Jerry Lewis as all seven dwarves and an early version of Cliff House, cultural appropriation moves from American Indian to African American, Cher singing grittier material with two great songs in the concert section and Cher is starting to look great and sing like a rock star.