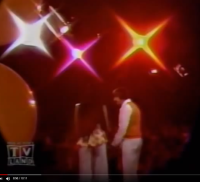 Cher is in a polka-dotted orange and white pantsuit. Sonny is in a white shirt and pants with an orange vest. These outfits are pretty casual considering Cher’s later-day outfits. I know I’ve said this before, but Cher is sporting an awesome tan, maybe getting tanner every week. Her earrings match her outfit too, the same orange spots! The back shot almost looks like a body double, at least Sonny. Does he stoop like that? I also notice that Cher still looks at Sonny during the lovey-dovey lines but Sonny does not always do the same. He looks at the cue cards. Is this refusal to memorize the song or the subconscious body language of guilt? 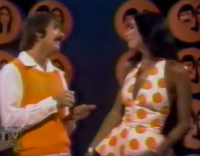 Banter: Sonny teaches Cher about comedy setups, timing, delivery and about Cher’s digs and making innuendos (being flip, being smart).  This is a really good dialogue showcasing how to deal with mansplaining circa 1973. Again there is both hand holding and folded arms. Cher flips her hair and puts her hand on her hip. There’s a few dumb Italian jokes (one that gets a big laugh), a Sonny-can’t-sing string of jokes. Cher does the tick in the air, a recurring motion to say she’s scored one on Sonny.

Sonny's comedy instruction setup was all to make a big nose joke. He collapses back into the set of face bubbles with joy. Sonny uses the word zotch. He talks about their joking around and keeps punching her shoulder and her face and talks about their bedroom life. Cher closes with a Sonny-sleeping-on-the-couch joke. She gets the last word in the battle, as if to say withholding love and sex is the ultimate weapon in the war. The fact that Cher gets the last word is significant and I think that did some cultural work both she and the show never get credit for.

As they close, Sonny affectionately moves hair from Cher’s face and we, the audience, are satisfied by their body language that it was all in fun and that Cher isn’t really holding out on Sonny.

I call this triptych The Posture of Mansplaining 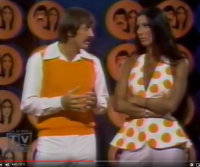 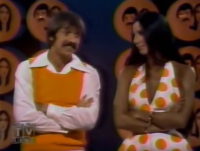 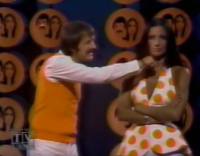 Guest spot (video)
Sonny & Cher introduce Bobby Sherman. Cher wears an orange top and black pants with a bobbed wig. Sonny wears a bowtie and a black suit. Sonny jokes that Sherman and he have many things in common. Girls go crazy when they see us. Sonny talks about his animal magnetism and Cher wonders if that’s why there are so many dogs around their house. Sonny complains about Cher putting him down all the time and then tells a nose joke.

Bobby Sherman sings “Marching to the Music,” a really odd song I couldn’t make head nor tails of. His outfit is Elvis-like and his chest is barren as a baby’s bottom and the suit is about open to his navel. He has a mustache now. He does a very unsexy hip swivel as he sings. The set is a cool puzzle of pieces of his face that come apart. 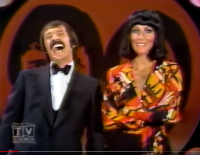 Fortune Teller:  Slot is to the left. Chad Everett was an actor on Medical Center, very popular at the time and Sherman was a teen idol of the 1960s. Everett and Sherman put a coin in the slot and they ask for great singing voices. A lightning bolt strikes and they leave singing about whatever they do, they’ll do it well together. Sonny comes and puts a coin in and is told the same thing. He starts singing but Cher’s single of “Gypsies Tramps and Thieves” is dubbed in. He even acts out the lyrics. That make me laugh. Cher quips, “Wanna hear that great voice in a better body?” This is the cue for her solo number. I gave this Fortune Teller skit three stars.

Solo: Cher sings “When the Sun Comes Out” (Video)
Cover of Helen O’Connell with the Jimmy Dorsey Orchestra (1941) Barbra Streisand also did a memorable version in 1962.
Cher wears a pink and purple patchwork halter dress. There’s pink light behind her. Rena has done a beautiful low, flaired bun. The earrings are long purple costume jewels. "Love is not always peaches, cream and honey," she sings. Her belly button makes a big appearance. The camera flares go to town on this one. A pretty straight-forward rendition. 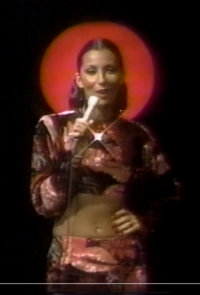 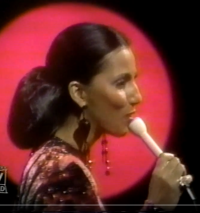 - Tarzan: Cher plays Jane. Sonny plays Tarzan. Her belly button is on view again. All this belly-buttoning was salacious back in the day. Sonny tries to throw the vine and it comes back. They keep the blooper. Cher makes a muscle joke. Chad plays a doctor who comes into town and woes Jane away. He plugs his show and does a James Cagney impression. There’s some meta talk in this skit, which ends with a Sonny stare.

They’re both in baby blue, Cher’s cutout dress and Sonny’s shirt with a white suit. Cher’s in a great afro ponytail with great sparkly hoop earrings. The back of the dress is awesome! It’s hard to tell if they’re singing “people don’t want no more war” or “no more woe.”

Cher’s hair gets lost in the black suit of the band conductor. My screenshot looks like the great abyss comes out of her hair.

Today this would be criticized as appropriation but back then it was celebrated as representation of nonwhite styles on TV and multiculturalism.

They don’t feel as comfortable with this material but the transition is pretty smooth. 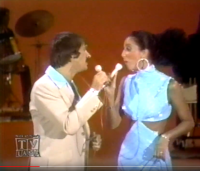 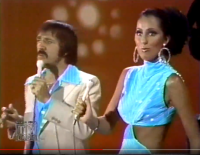 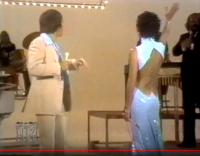 Cultural Spot: Lady Godiva done with Dixieland. Freeman King opens the segment asking if opera can survive The Sonny & Cher Comedy Hour. There are some alamy stock photos of this sketch online. Do a search for “Lady Godiva Cher” and there’s one of her with long blonde hair on a horse.

Chad plays the Earl of Coventry and Bobby plays a peasant. Sonny plays a peeping tom. They are being overtaxed. Bobby sings. Sonny cracks up. They sing commercial jingles and “Rock-a-bye-baby with a Dixie Melody” Cher sings on the horse. Sonny scares the horse. Cher’s hair catches in her bikini. I starred this skit. I must have liked it.

Highlights: Cher’s look for the concert segment, the Lady Godiva look anticipates her Prisoner album cover shot, mansplaining circa 1970s, the cultural work of Cher having the last laugh.