Opening Song: "For Once In My Life" (Video)
Cover of Stevie Wonder (1967)
They're wearing yellow and white outfits, Cher with a slash of pink or orange. I can't tell on different video versions. Cher is wearing matching white earrings. Cher sang this on the Gregg Allman episode of the Cher show in 1975 and Sonny sang the song last season with the Chastity video. They also sang it on Playboy After Dark. This all stretches the credulity of the word "once." Sonny yells, "take it, Mama!" With the knowledge of their impending implosion, I may be grasping for clues, but they seem to look away from each other when they sing sometimes... 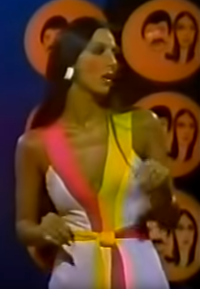 interspersed with some lingering intimacies like the finger clutch. Is Cher over it? 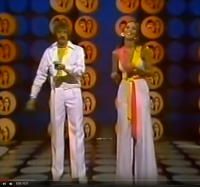 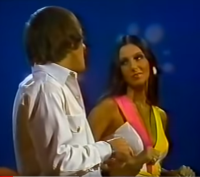 Sonny is dancing with himself at one point and he gives here a "don’t desert me" look during the "desert me" part of the lyric. 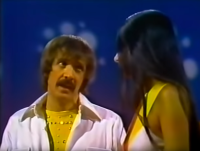 He gives her a very intense stare at the end. Is something going on? He does it during the song coda, too. 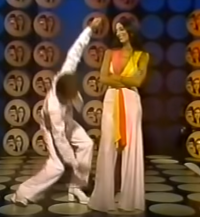 Banter: There's a short joke:  “the Nobel Prize for shortness,” Sonny calls himself the “little goombah,” Sonny says he was approached to pose for a nude centerfold. Cher’s laugh looks and sounds organic. This dialogue has the often anthologized joke: “How would you like being married to a sex symbol” and Cher answering, “Terrific but I’d miss you now and then.” Sonny talks about boosting magazine circulation and Cher says his body’s not doing much for her circulation.

Sonny makes a skinny joke about Cher being asked to pose as a yardstick. Sonny is impressed with himself. Cher returns a height joke to retort. Sonny says “honest injun” which was not cool even then. There's a Walter Cronkite nose joke.  Cher’s makeup looks great and her hair is getting really long. Sonny asks if his nudity would it offend anybody and Cher asks him to cover up his face.  Ouch!

Is it still me or does anyone else wonder if the writers were trying to tell Cher something subliminally?

Solo: “Song For You” (Video)
Cover of Leon Russell (1970) Carpenters also did a memorable version (1972)
This is the white version of the American Plains Indian outfit, the preamble to the Half Breed outfit. This felt like Indian pride at the time. Cher's wearing lots of makeup. Lots of closeup. What a great mouth.  She sings with her hand hooked into skirt. This is a good live version. She may not have always sang "Believe" live in her 50s, but she sang live every week for years on three network shows in her 20s and early 30s. She does that thing where she looks down at the end. 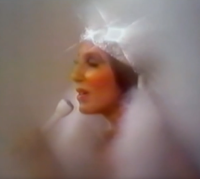 Cultural Spot:  Another installment of the fat-suits, again with Tony Curtis, this one called Detective Fat with Tony Curtis as Godfather Big. It's all a gangster theme. More food metaphors: they say something is a “piece of cake” and all the characters rub their hands together and say “Piece of cake! Mmmmmm.” Good stuff.

Guest spot: Sonny in a tux and Cher in a pantsuit I noted as "ugly" but with her hair in a bun do a godfather joke and Cher sticks her tongue out at one point. They introduce Barbara McNair who sings “I Believe in Music/Without a Story.”

Cartoon: Finally! I feel it’s been a while. John Wilson’s cartoon for “A Cowboy’s Work Is Never Done” (video) which portrays Sonny & Cher as children in love in the city. This is one of the best cartoons he did and I've take a zillion screenshots to discuss. This is also one of my favorite Sonny songs.

They start out as kids. Sonny even has a budding mustache. Sonny’s redheaded mom yelling “Sonny! Sonny!” There's a Times Square like street of movie marquees with western movies to inspire kids like little Sonny. Around town there are billboards with movie names, including some with The Sonny & Cher Comedy Hour producers snuck in. The names of movies I could read: Frontier Sissy, Kit Carson Lives, Horse Breath, Soap on the Saddle, Bull Buster, Frontier Boredom, Showdown in Encino.

In a moving scene of the cartoon, adult Sonny goes to an arcade and tries to recreate the glory of his early shootouts and fails. "YOU LOSE"

To console himself he then goes to the movies to see Sonny & Cher starring in a movie called "Cowboy." Oddly we don't see any Cher there.

"He was loved cos guys like him were hard to find." Such a good song.

Skit: Sonny & Tony in the park on an invisible bench. Cher is in a bad wig and pink dress.

Concert: “Thunder and Lightning”
Cover of Chi Coltrane (1972)
They’re dressed in violet or maroon (I can’t tell on different recordings) and red. Cher’s got a good headband.  Looks like a violet (or maroon) mermaid. Wish this was online.

-  Scheherazade: Tony plays the sheikh with a crazy snake headdress.

- Lady MacBeth: Cher wears an awesome dress! Tony plays Lord MacBeth. Sonny, as Macduff, messes up his lines. Cher corrects him. There’s a duel. Cher messes up her lines. There’s a joke about Sonny’s singing. Ted Zeigler plays the ghost of William Shakespeare come to avenge the murder of his play.

IGUB:  Swinging hands. Someone talks about people who "Can make you look better than you are" but I don't remember if that's Tony talking about S&C or Sonny saying this about Tony.