Opening Song: “Two of Us” (Video)
Cover of the Beatles (1969)
When they come out you can see the arm of a stage hand. Cher is wearing an American Indian top with fringe and a long skirt with a long slit. She’s showing her belly button. Sonny is wearing a Western shirt with a concho belt. Cher claps with her palms very loudly during the song. 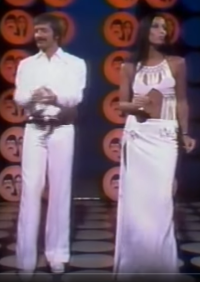 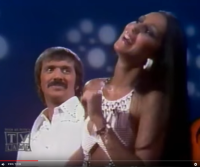 Banter: Sonny says, “Give the Italian a compliment” and Cher gives Dean Martin a compliment. You can really see Sonny's Sicilian Horn necklace. Sonny says he can handle the show alone (a woman laughs loudly in the audience) and he compares himself to Elvis and Tom Jones. 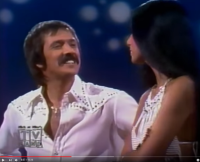 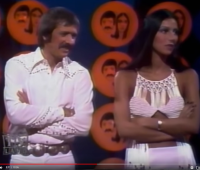 There’s a Sonny's-mother-is-a-horse set of jokes during which Cher is very playful, a nose joke after which Sonny again runs offstage (I didn't remember how often this happened). You can see the Sonny & Cher's official show jacket on a crew member and the cue card guy before Sonny flops back on stage again very goofily. You also get a good view of the audience. There are some kids in there. 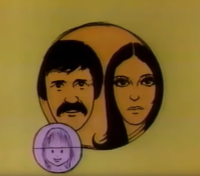 Sonny keeps fooling with his wedding ring. This is significant, no?

Sonny’s Pizza: This is the first installment of the Sonny’s Pizza skits which will carry over to their later-day late 1970s show. Sonny has hired a singer to help sell his pizzas. Robert Goulet sings and Billy Van says, “He’s no Robert Goulet.” Cher is Lola and wears a 1960s-era outfit. Goutlet sings “That’s Amore” with Cher. Freeman King does some secret handshakes with The Temptations. Terri Garr is also in the skit. (Video) 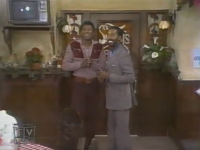 Guest Spot: The Temptations sing a medley of “Smiling Faces/Take A Look Around/Superstar” (Video)
They are sweating a lot. Where’s makeup?

Guest Spot: Robert Goulet sings “A House is Not a Home.” It must have been boring because I have made no notes about it.

Fortune Teller: Cher gives Robert Goulet $16 in return for $1. He exclaims, “This didn’t happen on The Andy Williams Show. Sonny just loses his quarters and says, “This thing is a gyp” and I could swear he says “hoof winked” instead of “hood winked.”

Concert: “You Don’t Mess Around with Jim” (Video, 1:56)
Cover of Jim Croce (1972)
They’re in yellow and black outfits. Cher’s in a bobbed wig. I love this song…like a lot. But they don’t really do it well. They stumble and screw it up. Instead of star next to this rendition, I've put a big X in my notes. It just sounds off. Note really into the outfits either. 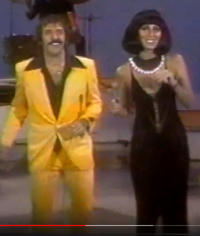 Solo: “Can’t Help Loving That Man of Mine” (Video)
Cover of Kern and Hammerstein for Show Boat (1927)
Cher is in a red, sequined dress with some amazing hair rolls. She’s so sparkly! There’s a big yellow light behind her. She’s low lit and hangs her hand. Some big belting at the end. 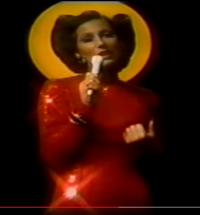 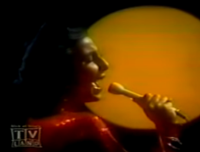 Cultural Spot:
This is about the French Foreign Legion. Robert Goulet plays Captain Courageous. The Temptations are also in the skit. Ted Zeigler plays the head of an Arab tribe. Billy Van makes a Canadian joke. There’s a joke about the pill. Peter Cullin speaks French. Cher plays Little Egypt. This is interesting as you remember Cher’s Little Egypt scene was cut out of the movie Mask because Peter Bogdonovich screwed up the lighting. (Video) See her below with Sam Elliot, Eric Stoltz and one-time boyfriend and Black Rose cohort Les Dudek (who plays one of the motorcycle gang members in the movie). That's Cher: giving lovers jobs since 1964. 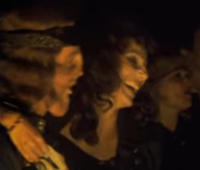 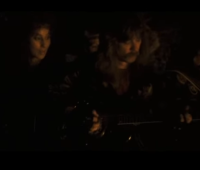 But back to the show....Cher wears an amazing dress and has glittering eyes. Wish there was an online pic of it. They do a Hawaiian dress. Cher sings “him” as “heam.” Sonny plays Sheikh Salami with chest hair out. They sing TV jingles. At the end they all join the French Legion.

IGUB:  Same clothes. Whew. Cher seems affectionate. Is this the calm before the storm? (Video, 9:06)

Highlights: First Sonny’s Pizza skit. Cher playing Little Egypt over a decade before she sings "Little Egypt" in the movie outtakes for Mask.