Opening Song: “From Me to You” (Video)
Cover of the Beatles (1963)
Sonny is in white and yellow. Cher is in a yellow halter pantsuit. My notes say “very tan.” Was she stress tanning? Her hair is very shiny and she’s wearing a big turquoise bracelet and ring and cool big earrings. 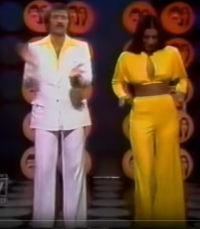 Banter: They handshake before their banter and she teasingly knocks his chin. Sonny calls Cher a “little dodger.” They joke about his singing. Sonny worries what their daughter Chastity will think about him appearing to be the clown, fool, clod or oaf. When Cher gets Sonny she marks the air with her finger. 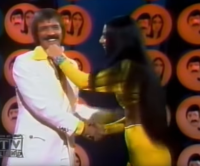 Cher makes fun of Sonny’s hand gestures. He talks about child psychology. He says, “I know the mind of a child” and Cher says she likes a man who knows his own mind. He says “Raising children is serious business. If you want to bring children into this world you shouldn’t fool around.” That leads to a sex innuendo. Cher "coochie-coos" him. She’s seems somewhat independent seeming now. 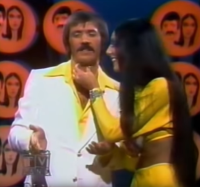 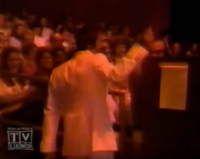 Fortune Teller: The slot is to the left. Sonny is arrested after insulting William Conrad, the local sheriff.

Solo: “He ‘Aint Heavy, He’s My Brother” (Video)
Cover of The Hollies (1969)
The visuals open with a frame of purple jewels. Cher is in a peach sparkly dress and has crazy-cool looped braids. Check out those eyelashes! I love Cher’s version of this song. This is a great performance with some feeling she’s rarely given credit. At the end we see her usual look down. 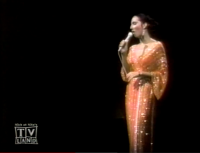 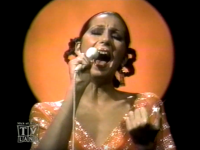 Guest Spot: William Conrad sings “The Men in My Little Girl’s Life” which is creepy in hindsight. He speaks in his daughter’s voice. It’s very dramatic. Guest Spot: Cher introduces Rick Springfield saying this is his “American Network Debut” singing "What Would the Children Think." Cher sports a green outfit with green and white hair bow. He’s billed as “a popular Aussie songwriter.” Springfield hit big (and I mean BIG) in 1981 with the song "Jesse's Girl." My best friend at the time had the album. We all knew him as a guitar player at the time but here he plays piano. The stage set is a big guitar in lights. He seems to be an early mullet adopter.  My notes on this song were “maudlin. " Although I missed the initial craze, I do like Rick Springfield now. My favorite Rick Springfield songs are "I've Done Everything for You," "Love is Alright Tonite" and the song "State of the Heart" which I actually bought on 45 of back in the day.

At the end, Sonny gives Springfield a Bono Award. Springfield pours over it. Check out Rick's unusual vest. Rick makes a joke about the award and the scene ends with the now-common Sonny stare. (Video) 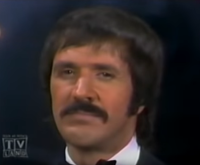 Skit: There's a cool transition into to a pool hall skit about William Conrad as a pool shark named San Quentin Spats and Sonny as pool player named Minnesota Short. They talk about the noble game of pool and Sonny is notably out of the frame during his great pool shot.

Concert: “Never Been to Span” (Video)
Cover of Three Dog Night (1971)
Sonny in a tux and Cher in a violet dress with jeweled headband and ponytail. Lots of hanging hand. Sonny sings the same verse after Cher sings it. This seems like a hot mess. Lots of Cher yelling. Not great. Kinda glad when it’s over. 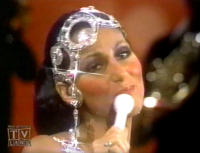 Same outfits. They get Chastity to say “Good night America.” It’s adorable. We are watching her get bigger week by week. I’ve starred this for some reason. Chastity is in a gray and pink dress. They sing the song. Cher says “ooga booga” to Chastity who smiles. Cher sings directly to Chastity and tickles her chin. Cher sneaks in a “goodnight everybody god-bless you” before Sonny can get to it. Interesting. At the end you can almost hear Sonny ask Chastity, “are you ready to go home?” We all want to go home with them.

Highlights: I don’t know culturally what we should make of references to Chastity’s female life on the show, predictions of her marriage etc. It’s ironic and noteworthy for Chaz looking back on his life, but the situation is perfectly understandable within the realm of the writers trying to imagine what the future of Chasity would be. There's nothing prescient here, but the irony still stands because we know things now we didn’t know at the time. It's great to see Rick Springfield pre-dating RICK SPRINGFIELD. Here is the first Barbara Nauseous appearance; I guess Barbara Walters didn't hold it against Cher. There's also an interesting plastic surgery reference in light of Cher's later tabloid history. Cher does a great solo number with "He Aint Heavy. He's My Brother."