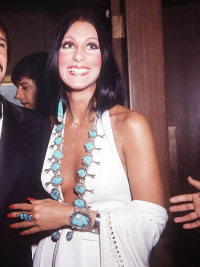 Opening Song: “I Need You” (Video)
Cover of the Beatles  (1965)
This is the dress with the big turquoise trim she will wear to the 1972 Emmy Awards (Video), the same picture used on the album cover pictured to the right. But instead of a tux Sonny, here wears a matching white shirt and pants with concho belt.  Cher seems confident and blasé. She looks great. Sonny says “sing it, lady!” Cher is wearing long white-turquoise earrings.  She doesn't seem to be making full eye contact in parts of the song like she used to. Sonny fixes her hair. She mocks being hurt at the line “when you hurt me.”  Lots of hair flipping and shoulder shaking. (Groovy, baby!) Sonny really works to get to the last note. 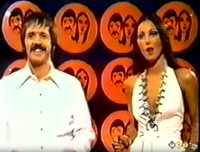 Banter: They handshake again and joke about Sonny’s mother and Marine Land. Sonny talks about her big schnoz. There's an oddly predictive mention of The Cher Show.

Guest spot: Bobby Darin sings “Sail Away,” a gospel song. Cool jack-shaped risers rise up behind him. It’s a gospel song about how America is all about Jesus and drinking wine. He’s hardly moved. It’s a song about Americans being free and family values which the songs says is unlike running through the jungle. So the song feels like it’s telling African slaves about how great America will be once they sail away. Literally the songs says we’ll be happier than monkeys in trees? No lions and tigers, just watermelons and buckwheat cakes. Am I getting this right? Oh my god. Let's move on.

UPDATE: Since I first posted this odd performance I've been reading about the song (a Randy Newman song from 1972) in the Greil Marcus book Mystery Train. If this wasn’t an OMG moment before, it is an OMFG moment now. Apparently the song is a satire about slave ships, intentionally racist to make the point about the propaganda of America, intentionally racists lyrics against the anthemic, patriotic sounding music. It’s meant to be awful. But you get the sense that Sherman is singing the song straight, as if he has no clue, as if he thinks the song IS a patriotic anthem (similar to what Ronald Reagan did to use Bruce Springsteen’s similarly critical "Born in the USA” for campaigning purposes). It’s pretty stunningly offensive on this extra layer. Did anybody on the show know? Yikes!

Vamp: The same blood red dress with ruffles. My notes say Sonny falls on the way up to sit on the piano.

Helen of Troy (Video)
Cher tries to help Bobby Darin, her husband, by seducing Greek warrior Sonny to get Sonny to divulge secrets about invading Troy. Cher is in a beautiful dress. They crack up and ad lib over Sonny's broken helmet. Cher fakes an orgasm. At the end Cher insinuates that she’s ready to have sex with all the men in the Trojan horse. For some reason, Cher gets away with cuckolding not only Sonny-as-co-star but her husband-as-character Bobby Darin. Nobody ever accused her, at that time anyway, of being a loose woman for relishing in sexual adventure and conquest as a woman. Pretty remarkable. 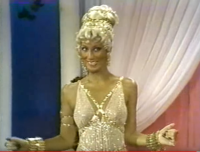 Lois Lane (Video)
I’ve starred this one. Bobby Darin plays Clark Kent before; Sonny plays Superman after. Cher is Lois Lane watching the transformation. Darin is good at ad libs.  Cher calls Clark a mild-mannered sissy. Clark complains that in all the years of dating, Lois has never held his hand and says, “I’m beginning to think you’re a little weird.” He goes into the booth and says he’s taking off all his clothes to prove he’s Superman. Lois calls him a kinky sissy. Not quite gay-friendly in retrospect. Sonny gets stuck in the phone booth with his big arms. He declares himself the big S/Ass. Cher makes a running for president joke. Cher accuses Superman of being even shorter than Clark Kent. Sonny offers her other super hero choices, but she says she likes Rock Hudson. So in despite itself it was gay-friendly.

Sadie Thompson (Video)
Sadie bumps over Sonny who pulls over the table with him and she makes a short joke. Freeman King and Bobby Darin are escaped prisoners from Devil’s Island. Sadie threatens to turn them in or turn them on. King makes a joke about racial balance. Darin does a Humphrey Bogart impression. Sonny hears an insult and gives the camera his look. And then the scene closes with his look at the camera that he's been doing all season.

Solo: “Willow Weep For Me” (Video)
Jazz standard, Ann Ronell (1932) or Ted Fio Rito (1932)
Cher is in a purple skirt and halter with a purple headwrap. Lots of sparkly flares. There’s a big blue bulb. One of the prettiest outfits for flare abstractions ever. The stage is very dark. They use double images. This song has lots of words. 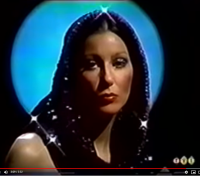 Cultural Spot (Video)
American college songs and popular tunes sung to the story of Robin Hood. The Opera guy is back as Robin Hood and tv.com lists his name as Bruce Tuthill in this episode. But I still can’t find him online anywhere to confirm that. Cher is Maid Marion (another beautiful dress) and Bobby Darin plays the Sheriff of Nottingham who is trying to string her up on the rack. Sonny plays King Richard the Lionhearted. His hair is falling out of his crown in the back. Darin tells a “Mack the Knife” joke and Sonny tells a joke about high taxes. Robin Hood’s men all dish about Main Marian. Cher says, "You got it made with Marian" and she swings her hips like a real party girl. Again, Cher is presented like a lustful and likable diva who always perseveres. She sings about how boring marriage is because she likes variety. She says she's the sweetheart of 60 guys! 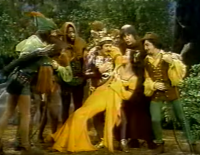 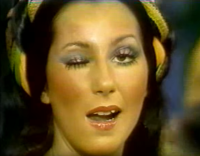 Concert: “The Beat Goes On/United We Stand/Without You” (Video)
Cover of Brotherhood of Man (1970) and Badfinger (1970)/ Harry Nilsson (1971)
I starred this. Cher is in a pink dress with a big braid buns (so great). Sonny is in a tux. Lots of hanging hand. I love them singing "United We Stand." It makes my heart feel warm. Although here when Cher sings “There’s nowhere in the world that I would rather be than with you, my love” she looks a little uncertain. But I still love the way she sings “divided we fall.” So definitive! This is one of the earliest examples of their "United We Stand/Without You" medley. I loved the melodrama of "Without You" as a tween so I should have been thrilled to the moon to discover that Sonny & Cher covered the song. But it feels so incongruous to me for some reason. This is a good version though. Cher does a good job with it and it gives her some space to really belt it out. 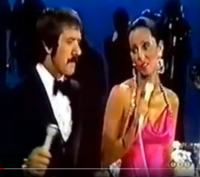 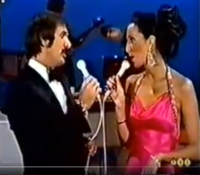 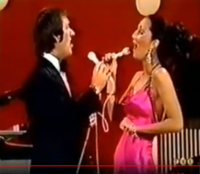 Somewhere along the line the ceiling of the set changed to a bunch of hanging bulbs! When did that happen? 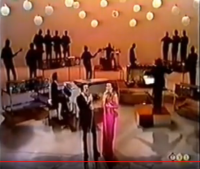 Highlights: Cher given an unusually progressive sexual agency in many of the skits of this episode. The show also seems eerily predictive of the future again with a reference to a solo Cher Show.