Opening Song: “You’ve Got Your Troubles” (Video)
Cover of the The Fortunes  (1965)
Cher in a handkerchief pattern dress top. Sonny in a matching with a sleeveless vest and white pants and shirt. They're almost too coordinated.  Cher has big red circle earrings on. She’s still exceedingly tan. Cher whoops. When Sonny sings about her "finding someone else to take your place," Cher does an interesting nod. Sonny does a loud whoop and yells “Hit it mama!” Cher makes eye contact with one of the cameras (this feels somewhat new and assertive) and does some big hair flips. Cher has to tip off Sonny to where the active camera is located. Cher rolls her eyes to the camera. They really belt it out at the end. 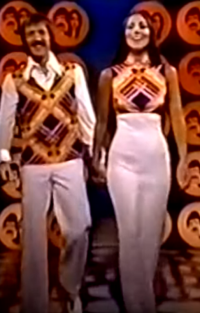 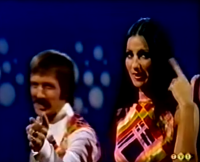 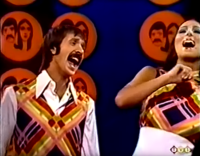 Banter: Sonny talks about Cher watching too many monster movies before bed.  Sonny tells about Cher being under the sheets and shaking in terror. Cher claims this is because Sonny was coming to bed. Cher tells Sonny as an aside that he’s hairy in his shirt. Cher gets Sonny off track with an ad lib (Sonny: “Can I tell you another thing?” and Cher: “Do you know another thing?”) Sonny says they should be communicating at night and not watching TV. Cher says she hopes that if Sonny starts talking, that will put her to sleep. She licks her finger and marks a 1 in the air. Sonny points at her scolding-like. They introduce Ken Berry. 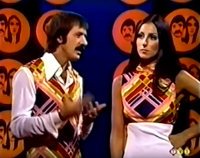 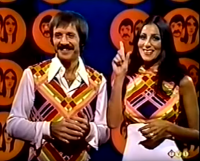 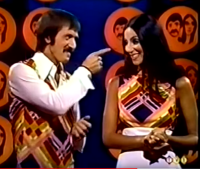 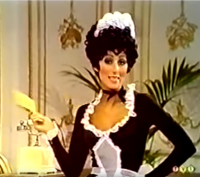 Guest spot/skit: (Video, 6:51)
Ken Berry tap dances and sings “I Can’t be Bothered Now” (the song is about how he can't be bothered while dancing) while Sonny and Cher as his valet and maid try to tell him something important, along with a fireman, a constable and a lot of people looking like ushers. Cher looks like she’s having a good time. Everybody plays around at tap dancing badly, except Ken Berry. He seems to know what he's doing. At then end, he exclaims, “What is it you people want?” Cher says, “Those stairs are rotten” and Berry falls through the landing. No one will help him out...because now they’re dancing and can’t be bothered now. I’m not a big Ken Berry fan but he does do a funny little bit at the end. 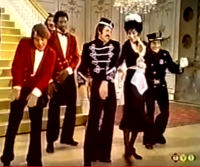 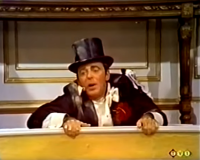 Sonny’s Pizza: You can hear Cher’s shoes on the floor and she wears a heavy blue eye-shadow all through this episode. Rosa tells Sonny the food inspector is coming. Ken Berry from a competing restaurant (I think called Binkey’s) arrives instead and they all confuse him with the food inspector. Berry complains there is dust on Sonny’s pizza.

Skit: A blonde Cher in a screechy, crying voice complains that a man has assaulted her in the park. “It was terribly gross,” she says. She sings to Ken and Sonny, “let’s go back to the park” and winks at the camera. I have starred all these Cher camera asides. They feel like a bold, new thing.

Solo: “By Myself” (Video)
Cover of Judy Garland (1957) from the musical Between the Devil (1937)
Cher wears a beautiful braid bun with a tail of hair She's wearing a black and silver top and matching pants, very blue eye shadow. I’ve starred this. It's a much more understated and quiet version than the on on the record Bittersweet White Light. This really feels like an emancipation moment. She reaches out her hand and rolls her fingers. She’s never done that before. 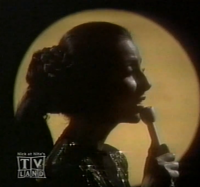 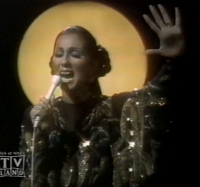 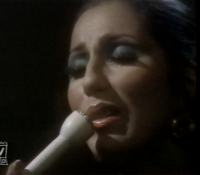 Guest spot/skit (Video)
Sonny, Cher and Ken Berry talk about “swapping” leading you to believe they’re talking about wife-swapping, including using car keys. But they’re only talking about swapping cars and the wives are disappointed. This intro was missing from my version of the show.

The New Seekers sing “Come Softly to Me” which I’ve marked as “awful” and Mr. Cher Scholar commented that “they make Neil Sedaka sound butch. But I  didn’t hate it so much this time. It is kind of precious though. I will always love this group, however, for singing “Free to Be You and Me” on the Marlo Thomas and Friends album, which I wore out while I was in my single digits.

Skit: Ken Berry produces the debut of Sonny & Cher on Broadway. For real, Cher’s Broadway debut was Come Back to the Five and Dime Jimmy Dean, Jimmy Dean February 8, 1982. 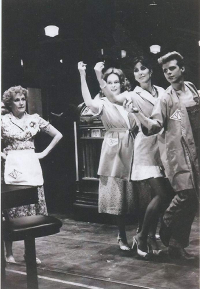 In the next scene, Sonny & Cher are on stage with different orange outfits. There’s a New York City mugging joke and a reference to Flo Ziegfeld in the 1900s.  Ken Berry plays a lyricist here, Ted Zeigler plays a music publisher, and Billy Van becomes the producer. Cher is a secretary starting out. There’s the joke that “Cher does Broadway” like all these show references to Cher as a loose woman. And she never gets any flack for this because she’s supposedly happily married to Sonny. But there's more to it. Other married women on TV at the time were not being described as resiliently sexually active.

There’s a nose joke. Suddenly Sonny & Cher sing with accents. Others refer to them as the “two kids” or “you kids.” Neither of them are kids anymore. This is just vestiges of their rock and roll stardom from the 1960s when at least Cher as a kid. Cher is wearing a great black Mae West dress. Someone raises the idea of changing the show from Sonny & Cher to Cher & Sonny, lightly predicting Cher’s overtaking the act and becoming the centerpiece. There a lot of balloons and some audience participation.

Concert: “Stagger Lee (Stagolee)/Rip It Up”
Cover of Lloyd Price (1958) and Little Richard (1956)
“Stagger Lee” is the true story of the murder of Billy Lyons in St. Louis, Missouri, on Christmas 1895. Sonny sings it “stagolee.” This is the second version of this medley (first was from  1971) and it's better but still a less exciting rendition than the later one they will do. Cher wears a plum dress with short curly hair. Sonny is in a double-breasted matching suit.  Sonny begins saying to Cher, “Do it!” I love this medley. Good shoulder rocking by Cher. Those earrings are swinging. Cher looks great here, confident. Nice somewhat-spotlight on the guitarist. Then Sonny says again, “Sing it Mama” and he really milks the drama out of the song. The big banks of lights are back on the ceiling of the set. 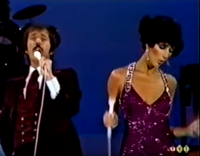 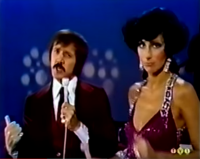 IGUB:  They discuss Chastity’s tap dancing lessons and her supposed boyfriend named Teddy. Sonny asks if Teddy has a mustache. They Sonny jokes, “Get this kid outa here. She did her bit.” And to Chastity he says, “We’ve got to say goodbye to the people” claiming that 80 million of them are watching. Those were the days of water-cooler TV, huh?

Highlights: Cher is looking at the camera and establishing a direct relationship with the audience for perhaps the first time. The show predicts the Sonny & Cher show on Broadway. For those who think Cher has always been singing without emotion, f*%k you because she’s leaving Sonny and it’s all up in this version of “By Myself.” Another interesting rendition of “Stagger Lee/Rip It Up.” Chaz's parents are already setting her up with Teddy!