Skit: About avoiding autograph seekers by disguising oneself. Everyone is in disguise except Sonny, this reinforcing the idea that he loved being famous.

Opening Song: "With a Little Help from My Friends"
Cover of The Beatles, 1967

The stage is still small. Sonny is in black, wearing a silver concho belt. Cher is in pink. They sing this song again in October of 1973 (the Jerry Lewis episode). Sonny urges Cher to “Sing it!”

Banter: Sonny talks about how a song needs to grab people. Sonny admits he lets Cher get laughs and how he comes across as the fool. He says they're act is like Edgar Bergen and Charlie McCarthy in how “the dummy gets all the laughs.” Cher tells him his fly is open. They hug at the end of the segment.

Skit: Cher sings a bit of "You’ll Never Walk Alone." She's in a white gown with gloves and long earrings. At the end, people job by and she introduces Glen Campbell. These transitions were pretty on-the-cheap back in the beginning. 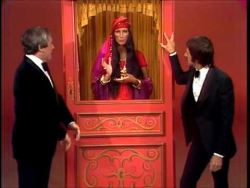 Fortune Teller: This is a recurring skit with Cher as a fortune teller in a carnival box. I almost felt like some of the cheaper Cher doll box designs were a play on this set piece. Sometimes the coin slot was to the left and sometimes it was to the right. The pic to the side is from one of the Merv Griffin episodes.

In this version, the coin slot is to the left. This skit is broken into two segments. In the first, Sonny tells Glen how gullible he is, that Glen has a country gullibility.

Skit: Cher as an American Indian with Sonny, dressed in a black suit, telling her, “Everyone here knows you’re part Indian.” Cher accuses Sonny of having “pale-faced disease” and singing “with a forked-tongue. These jokes illustrate recurring themes of the show: representing Cher as an Indian or "part-Indian" (and a smart Indian at that) and teasing Sonny for his bad singing. Sonny retorts, “My singing holds this act together.” He makes himself laugh. Cher pokes her head out of a set tee-pee, denoting her as a Plains Indian.

At this time, American television was exploring multi-culturalism after a decade of very white, countrified television programming. In fact, the head of CBS, Fred Silverman, who greenlit this show was all about urbanizing American television for the baby boomer audience. He cancelled successful shows like Green Acres and The Beverly Hillbillies and launched shows like The Mary Tyler Moore Show, The Bob Newhart Show and The Sonny & Cher Comedy Hour.

Cover of Billie Holiday, 1939
Cher wears a small braid bun that I love and is backed by a pink bulb of light.

Skit: Sonny is dressed as Viking Thor. Cher grabs his breatplates and his horns turn down.

These skits introduce the theme of Sonny's bravado and Cher’s taking him down a notch. Some believed Cher came off as cutting and mean here, (Cher herself believes she came off like a cold, bitch). Others say they saw the underlying affection between the two, which is very likely or the skits would probably not have been as successful. Some Cherness must have seemed affectionate or viewers would have been turned off. I was too young to denote such nuances in their relationship (or get the cutting jokes at all, for that matter). I was all pretty dresses and sparkly stuff! 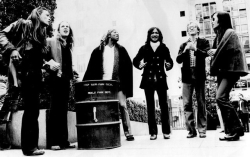 Guest Spot: Gideon & Power sing “In the Upper Room with Jesus.” This was a very multi-cultural band and the lead singer ran around and off the stage. I loved this! It's always been one of my favorite musical guest spots of the show. I wish there was a video of it online. Here’s the audio online.

Fortune Teller: In part two of the earlier skit, Sonny keeps putting quarters in the fortune-telling machine until Cher walks away (illustrating Sonny's own gullibility).

Concert: “Cry Like a Baby/Bad Moon Rising”
Cover of The Box Tops, 1968, and Creedence Clearwater Revival, 1969

Sonny & Cher will sing both these songs again in separate opening segments in 1972. Sonny is in a black suit and Cher in a yellow dress with a fringe bottom and long hair with a top bun. She does more lip/teeth licking. Glen comes in at the end to sing with them on “Bad Moon Rising.”

Cultural Spot: Glen Campbell predicts 2001. And didn’t that seem so far away at the time? So quaint. These are musings about the directions of modern life with blackout skits:

I Got You Babe: Both are in pink, not in their opening sequence outfits. These are episode #5 outfits. And likewise, epsiode #5 ends with the outfits from this episode’s opening. Why did they do that? Just, why? They thank their guest. They’re actually friends with Glen Campbell and have been guests on his show (which they plug here). They knew him from when he worked with the Wrecking Crew on their early 1960s records.