Cher is in a yellow pantsuit with gold and white bracelets. Sonny is wearing a yellow argyle vest. Lots of hair flips and pointing during the song. You can see side boob and under-boob in Cher’s dress. 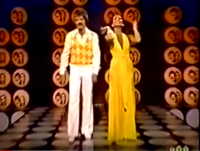 Banter: This one is full of sex jokes, mother-in-law eating buffalo jokes, short jokes, nose jokes, Sonny calls Cher’s hips a lethal weapon. There’s "one for the goombah" and "one for the Indian." Sonny gets offended and pretends to leave the stage, says he’s going to “split” and “zap out.” Cher requests that the crew "open the gate" and the bulbs open and quake.  Sonny cracks himself up talking about his mother, he references the millions and millions and millions of viewers. Cher waves to us and references Topeka and Bono, Texas. Sonny falls on the floor after a nose joke. Cher laughs. Cher turns her back to Sonny pouting. He tickles her. She says he’s still her goombah. But is he? 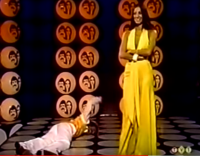 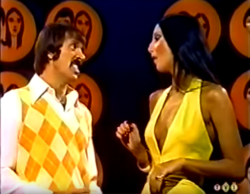 Skit: Sonny , Jim Brown and Bobby Vinton are in a park. Sonny’s in a tux. Jim and Bobby are criticizing Sonny’s physique and they’re discussing physical fitness in show biz. Sonny reveals what looks like a Concho belt and says it’s a karate black belt. He goes around hitting prop trees.

Solo: “That Rainy Day” (no Video!)
Not sure about this one as I can't confirm but it might be a cover of Dolores Gray (1953) from Carnival in Flanders
There's a blue bulb hanging behind Cher. She’s wearing a big sparkly gold head wrap and a flower dress. She’s getting pimples on her forehead. This is either marital+work stress and/or bad, thick makeup as she would later suggest. The scene is very low lit.

Football Skits (lots of sexist jokes in these, like about the bra size DD):

- Cher is a cheerleader. Jim Brown is a coach to a bad team. He uses astrology to coach football. They sing “Aquarius.”

- In a modern apartment (it’s a museum to the 1970s really), Cher pretends to undress to get Sonny's attention, finally resorting to dressing like a linebacker, which works.

- Bobby Vinton plays a coach talking about Crazy-legs Johnson, who turns out to be a girl (Cher) on the team. The term “chauvinistic pig” is invoked. There’s an ass shot. The coach draws football plays on her back. I actually thought that one was funny.

Cher is tan and wears a brown dress with a macaw bird attached (very cool). The bird has a cool fringe tail. She has great long stringed turquoise hoops. Sonny is in white and orange.  The camera switches and Cher barely misses a beat. Cher tosses her mic around at the end like a real pro. 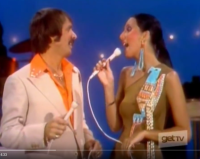 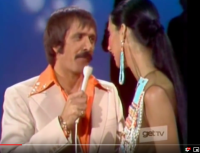 Guest spot: Bobby Vinton sings “Sealed with a Kiss” (video) with a blue shirt with monster fringe and he's surrounded by I Dream of Jeannie types.

Raggedy Sonny & Cher: A ball rolls around on Sonny’s hat rim. The Love Story theme can be heard playing from their apartment. It’s Bobby Vinton in the closet with a sax. Raggety Cher is cheating with him.

Cultural Spot: The title is: Way Down Upon the Mississippi Mud. It’s about an evil plantation owner, Bobby Vinton, who has no slaves. Cher plays a southern belle whose parents are named Mint and Julip. There’s a riverboat that’s getting foreclosed on. Jim Brown plays a Shaft-like gambler. Sonny plays a cheating card shark. The captain of the riverboat looks like Mark Twain. There are double entendres. There’s a chess game, an Italian joke. Cher tries to hid Sonny behind her fan.

IGUB: No notes on this.

Highlights: Good example of the ethnic stereotyping in the banter spot: Indian vs. Goombah. Raggedy Sonny & Cher is always cute. This is the last episode credited with Steve Martin.