Opening Song: “Do You Believe in Magic” (Video)
Cover of the The Lovin’ Spoonful (1965)
They're in all white outfits with rhinestones. Sonny's white pants show off a flat ass. And Cher looks at Sonny when she sings “it’s like tryin' to tell a stranger about rock and roll." Should we read anything in to that? 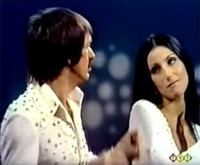 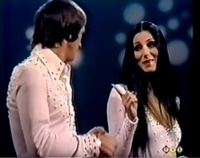 Banter: Cher mocks Sonny’s snapping his hands.  Sonny talks about his life as a little kid in Detroit and his tough neighborhood, how bullies threw him into the Detroit River. There’s a short joke (Cher references Sonny’s high heel sneakers), a shrinkage joke, a singing joke, an enunciation joke, a “manhood” joke. Sonny also talks about Father Callahan who stood up for him. Cher jokes that this Father called the bullies music critics. Cher does a Marlon Brando impression and a Groucho Marx impression and claims Sonny’s singing turned Father Callahan into a rabbi. I’m hot tonight, she says. Sonny gives her the "you're bad" finger pointing. 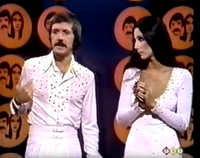 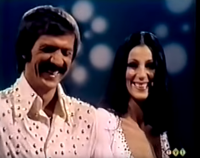 Skit: The Greek Farasopolis Brothers – swordplay with fake swords skewering the audience. There’s conspicuously no applause or applause track after the skit.

Solo: “Sonny Boy/My Mammy/Rock-a-bye Baby with a Dixie Melody” (No Video)
Cover of Al Joson (1928), William Frawley (1918), Al Jolson (1918)
William Frawley went on to play Fred in the 1950s TV show I Love Lucy. Cher wears a tux and a short wig and a long chained pocked watch. I’ve starred this although it’s pretty much a trio of blackface Al Jolson songs. This is good example of Cher’s androgyny, first remarked about during the 1960s. Cher's persona is affected greatly when she dons menswear.

I still can’t figure out where’s Cher’s long hair fits under the short wig. It doesn’t seem to be hiding behind her back. But maybe it is. There’s a big star behind her and a vaudeville set. She does a lip lick, the hanging hand. She throws and grabs her mic. Her profile is somewhat Streisandesque here. She opens her hands and unrolls her hand with her long nails. She’s rockin’ it!

Vamp: The blood red dress with curly hair and big earrings. Sonny is starting to climb up and sit on top of the upright piano, trying to glean some attention.

-  Helen Gurley Brown: about the famous Cosmopolitan magazine editor of the 1970s and 80s and the famous naked Burt Reynolds centerfold and also Brown’s book “Sex and the Single Girl,” a groundbreaking and controversial book at the time (Brown would often advise using sex to get ahead). Cher wears a great wig in this skit. We need to provide a Sonny-shirtless alert. The actual spread of Burt Reynolds is shown. Cher, as Helen, wants to rehearse the photo shoot, which she calls Sex and the Italian Dwarf and suggests Mad Magazine would be more appropriate. At the end, Cher pulls off Sonny’s clothes. There’s also an Andy Williams reference.

-  Amber St. Clair: Otherwise known as Forever Amber, a “lady of the evening.” Amber is portrayed as a social climber. Andy Griffith plays the Prime Minister and Sonny plays a prude King. Cher’s fan breaks and a double entendre results. Cher forgets her lines. She’s called the royal floozy and she comes on to Andy.

- Sadie Thompson: Sadie starts with a bump train. Her hair is light red. Andy Griffith plays a New England professor. Sadie offers to teach Andy physical education and the student body. She says she can take Andy on a tour of sin. She says she’ll let him swing on her playground. The idea is proposed that Sadie “ruins men.” Ted Zeigler makes both Sonny and Andy laugh. At the end of the skit, Sonny gives the camera his Sonny stare.

Cultural Spot: Freeman King does his introduction from a big chair. This is a spoof on the show Bridget Loves Bernie, the 1972-76 show with real-life couple Meredith Baxter Bernie and David Birney, two people of “differing faiths,” Jewish and Irish Catholic. This was allegedly controversial back in the day. Meredith Baxter Birney later alleged that during the taping of this series and the 1980s series Family Ties (on which she played the mom), her husband David Birney was abusing her. This Sonny & Cher Comedy Hour version is called “Gidget Loves Ernie” and is about Cher playing a very campy Jewish mother and Sonny as her son. I starred this skit. Cher is upset that Sonny is marrying a Catholic girl. Terry Garr lays a nun. The best man is gay. The Dad is played as a Jewish American Indian.

Skit: Cher plays a service center manager with big boobs at a motor/auto repair company. She’s very motherly during some kind of either real robbery or just a $750 auto repair.

Guest Spot: Andy Griffith sings “Something Bigger Than You and I” 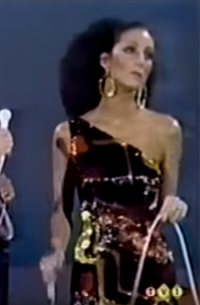 Concert: “Baby Don’t Get Hooked on Me” (Video)
Cover of Mac Davis (1972)
I love, love, love this song and also their rendition of it (the first I ever heard). Cher wears a contemporary off-the-shoulder dress with hoop earrings and an afro-styled ponytail wig. She hangs her hand. Sonny wears a scarf tie. This is one of my favorites. Wistful, sad is the Cher look. And she belts the song all over him. One of my screenshots catches a mean-Sonny look at Cher. 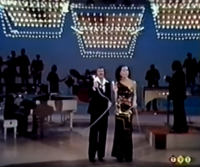 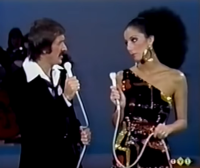 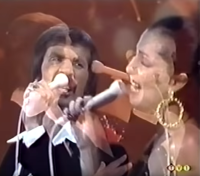 The GetTV version excludes the Cultural Spot. Jim Cassidy is listed as a cast member in the credits.

Highlights: This is the first episode with three big production numbers: Headlines in the Papers, a Cultural Spot AND a Vamp all together in one episode. Usually episodes might have one or two of these but not as yet all three! $$$. This show continues to be very multicultural with references to Italians, Jews, Catholics and Greeks and includes an example of Cher-androgyny. Cher does some good impersonations, including the Jewish Mother. The duet “Baby Don’t Get Hooked on Me” is awesome. There’s also plenty of cultural appropriation going on in the name of showing cultural diversity on television (Cher's wig in the Concert segment). We get some more femme-fetales in the Vamp sketches, women who are ever more flirty and unapologetically sexualized.