This is the first full official Christmas episode for this particular show. Both Comedy Hour Christmas shows contain magical Christmas moments involving William Conrad, so it’s a bit confusing. The earlier show is staged similarly to their other staged shows except the ending is unorthadox. The later show (December, 19, 1973) goes completely all away from their regular format. This show here is also the last show before they come back in January of 1973.

Opening Song: Opening Song: “Jingle Bells” (Video)
Traditional Christmas song written by James Lord Pierpont  (1857)
According to Wikipedia, this was intended as a Thanksgiving song!
I originally though this was their own special groovy arrangement but Cher also sang the song this way with Glen Campbell on The Glen Campbell Show in 1969. In this version, Sonny & Cher wear all white polyester outfits. She wears silver medallion earrings. Her boobs jiggle and you can see her nipples, making her the first proponent of jiggle TV predating Charles Angels and begging the question whether or not this song should be called Jiggle Bells. They seem to be having a good time. Probably pre-vacation euphoria. 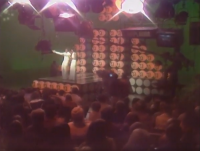 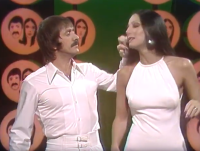 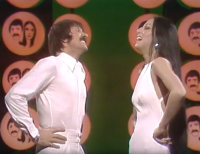 Banter: Cher blames Sonny for her broken nail. First Sonny says someone else did it. Then he says “You hit me!” He mentions that their audience is 80 million, give or take he motions with his hand. Ratings estimates for the 73-74 season were only 15 million at this show's ratings peak. The top rated show on television at this time was All in the Family with weekly viewers only at 20 million.  So Sonny is wildly exaggerating. To compare, the highest rated show of 2019 was Game of Thrones also hitting 15 million per episode.  Sonny says their show is now on Wednesday nights. They do some myth-making about their origins and lucky Wednesdays: their first record, their first concert, when they met, when they got engaged and married. Biographical accounts don’t always match these details but this is entertainment not history. Sonny scolds Cher to pay attention to his monologue. He says, “Don’t just stand there like an Indian” which I guess is referring to the silent wooden Indian found outside of storefronts back in the olden days. Wow! Yikes! Then he asks her if she wants some cigars and says "Who was that masked man? I don't know but he left a white Indian." Is this in reference to Cher's not full-Indian-ness? Cher wants a present instead of a kiss. He brings mistletoe but it's garlic, which Sonny calls Italian mistletoe. She refuses so he eats it. 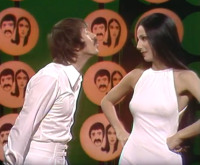 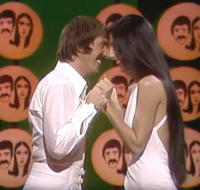 Skit: William Conrad and Freeman King play two Santas fighting over a street corner. The story is about competitive Santas who come together. There’s also an inter-racial subtext to the story about coming together. Which is a nice counterbalance to the interpersonal slurs of the opening segment’s marital swordplay.

John Wilson cartoon: “Black and White” (Video)
Cover of Three Dog Night (1972) and Pete Seeger (1956)
This is a great, great cartoon (one of Wilson's best), full of black and white geometry and interracial friendship among children and it perfectly follows the dueling Santas segment. The video also goes into KKK and Black Panther imagery where the teeth of the tiger become the hats of Klan members. 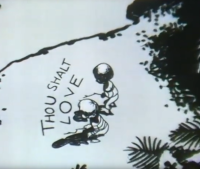 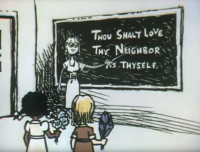 Sonny’s Pizza: Rosa and Sonny are making out and the gang are joking about bad gifts and Jewish bill collectors. Cher wears Christmas ball earrings. William Conrad comes by to say their electric bill is 4 months overdue. The lights go out and they say Happy Hanuka.

Raggedy Sonny & Cher: (on the Christmas DVD only)
Sonny sings “Deck the Halls” There’s a Burt Reynolds joke. They have no money for presents.

Christmas Carol Medley: (Intro part not on Christmas Collection DVD) (Video)
Sonny and Cher are at home with Chastity. Cher’s hair is in a Victorian bun with curls and she’s wearing a Victorian lace blouse. Sonny is in red and green. Lots of plaid happening. Chastity is holding a blue bean baby very popular then (I had the pink one). Chastity says her parents and Linda are a Christmas gift. Awww. We assume this is the nanny. In Chas Bono's book Transition, he talks at length about Linda and the trauma when Linda left and was replaced by a new, far-from-great nanny. Sonny & Cher tell Chastity she's getting two Christmases (a TV one and a home one) and Chastity reveals the discontinuity of their filming the show way before Christmas.

They also tell a lesson about how some gifts are not material and the scene changes to a set of a snowy European village.

It’s all very warm and cozy. 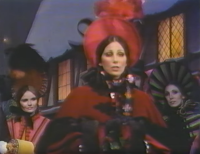 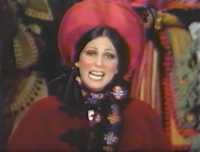 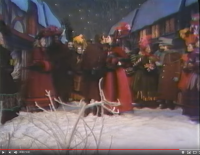 Myth: Sonny & Cher on Vacation
This is similar to Sonny & Cher at Home in episodes #4 and 8. Sonny & Cher visit a ski lodge wearing "his and hers" furs because they want to “get away from the Hollywood scene.” They arrive at Peaceful Valley Ski Lodge, which is a bit sad considering Sonny died at Heavenly Ski Resort in 1998. They play jet setter games but can’t get away from their fans and end up taking photos with them and writing their autographs. The resort costs $800 a night. They call the huge room “cozy” and people are amazed Sonny & Cher remember their names. Fans declare that “they seem just like the folks next door.” Sonny & Cher mock affectation and respond “because we’re such good actors.”

This could be off-putting as a skit, but I actually believe their joking tone here. If there’s one thing people all say about Cher is how down-to-earth and friendly she is, how without Hollywood airs.

Cartoon intro: "It Came Upon a Midnight Clear"/"One Tin Soldier" (Video)
Cher in all white wearing a huge bun of buns sing “It Came Upon a Midnight Clear” (Edmund Sears, 1849) as an introduction to the John Wilson cartoon of “One Tin Solder” (The Original Caste, 1969). This is probably my second favorite John Wilson cartoon, literally depicting the story of the song. 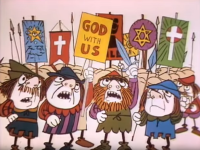 Sonny & Cher close with “It Came Upon a Midnight Clear” framed in a greeting card.

Guest spot: William Conrad does a dramatic reading called “one Solitary Life” as Sonny, Cher and Chastity listen. (Video) There’s no closing IGUB number but the credits roll with an alternative font and a quieter instrumental version of “I Got You Babe” playing.

Highlights: This is of the classic episodes of the show and America would never forget hearing Cher sing “O Holy Night.” The show is also full of Sonny & Cher mythmaking or their origin stories and their mock celebrity lifestyle. This is the first show to break out of the format for a holiday. To contemplate 80 million people (give or take) watching one show in. 1972 is mind-boggling. But considering how fragmented and divided we are in this world right now, it’s impressive that Game of Thrones gets the millions of viewers it does, or that 15 million people now would agree on any one f**king thing.