Banter: They shake hands. Cher says, "You really work out for an old guy." Sonny says, “it’s good to see you back.” Sonny twists his wedding band and says the song reminds him why their marriage is so successful. They talk about having different interests. Cher's arms are folded. There's a singing joke. Sonny says the audience thinks of them as "the storybook couple." Cher quips they are, “beauty and the Beast.” They talk about how a lot of people are not getting married these days but just living together. He says it's a free country, like you can smoke and drink. Cher asks what happens when children come along. Sonny jokes that you just don't let them see you smoke and drink. (Interesting joke considering Sonny & Cher became legally married when Chastity came along).  There’s a false teeth adhesive joke when Sonny blows a line. Sonny punches her thigh twice and she says "if you punch me there one more time..." Sonny flirts with her. He says something interesting directly to her: "You can't run offstage" indicating she might be running offstage. He accuses her of coming over into her key light. She jokes she can't get into his key light unless she gets on her knees. Cher gives Sonny a hard time and makes Sonny crack up. Sonny tells Cher to “be quiet” and says people don’t want to get married because they don't want to get stuck with a dummy for the rest of their lives. My notes say they call out Jean Stapleton but the online clip doesn't show that.

Skit (Video)
Jean gives a lecture on acupuncture as a confused old lady. She keep mispronouncing it. Sonny is behind her as a Styrofoam cut-out. There’s a joke about the President of CBS (Fred Silverman) having no feeling whatsoever (which may be referring to the struggles experienced with censors on Jean’s show All in the Family). Jean takes questions and there’s another Jean Stapleton character in the audience. They converse with each other and finally the Jean the lecturer tells Jean the audience member there will be no more dingbat questions and to stifle (short for stifle it), both catch-phrases from her show. 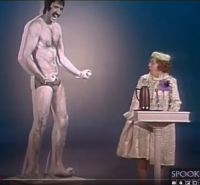 Sonny’s Pizza (Video)
It’s after New Year’s Eve and Sonny is hungover. Turns out he proposed to Jean by mistake. She comes in dressed for a wedding singing "Sonny Boy." She is very happy until Rosa (Cher) tells her Sonny is “flat broke.” Jean calls Sonny a “male chauvinist meatball.” Rosa then leaves and the lights go out. Sonny cries. The end is kinda sad.

The Second Annual Bono Awards (Video)
Dancers are in TV outfits. (I think this might be where my mother got the idea for my Halloween costume one year.) You can see Sonny’s platform shoes. The Bono statue looks like an Oscar statue but with a big nose. I'm always trying to get a snapshot of it. It looks so odd and undefined. Lyle Waggoner plays the host, Lyle Perfect. He has a rhinestone in his teeth that sparkles. The Most Embarrassing Couple on The Newlywed Game goes to Mr. and Mrs. Letchman, sonny and share making out and smiling goofy smiles. The Presidential Bono is given to the shows liked by the President (Nixon), The Smothers Brother’s Hour ("a real dark horse"),  the 1972 election returns and the 1972 Republican convention. The Best Vanity Award is given to Julie Andrews and Carol Burnett and Cher and Jean spoof Julie and Carol and profusely compliment each other as they receive lots of laurels. The Humanitarian of the Year award is given to Jean playing another elderly lady for her alleged work in the show biz old folks home located in Anaheim, California. But as she's trying to give a speech, she admits she's a corrupt hooligan and she loses her temper and calls the chorus guy a sissy and to "take your commie hands off me." How ironic that's still happening in 2020. Teri Garr is inexplicable wearing an inner tube. At least she's not pregnant in this year's awards. 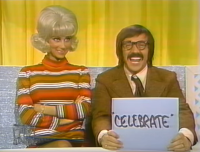 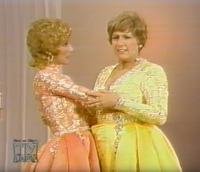 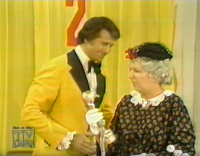 Solo: “Love Song” (Video)
Cover of Elton John (1970)
Cher is in a gown with a crisscross top with a curly wig and big hoops for earrings. She shows off her manicure and her belly button.  I’ve starred this. It's one of my favorite solos from any of her shows, a beautiful song. It reminds me of Neil Diamond's song "If You Know What I Mean." Cher does a great job here with the song's soft emotional aspects. Cher says she would have stayed if Sonny been willing to provide a 50/50 partnership. When this song insists "you say it's really hard to leave behind the life we knew/but honey, there's no other way/it's really up to you" you get the sense the negotiations are ongoing. "Love is the key we must turn" indeed. There’s a triple Cher exposure. She smiles at the end. 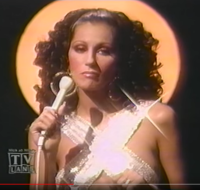 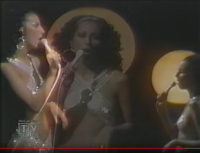 The Gloria Majestic Story (Video)
I’ve starred this. It’s an All About Eve spoof. Cher plays Gloria, the star who is mean to her fans. Jean Stapleton plays a theater usher and Gloria’s biggest fan. Cher is in a black Marlene Dietrich styled outfit with a yellow boa with great flare throwing sequins and star-shaped earrings. Cher's Gloria sings a song about her greatness and staying 23 eternally. She sings "beauty is harder to sell when you're fifty or sixty or...I don't wanna talk about it." She sings "I'm eternally gorgeous and younger than young."

At a backstage party there are lots of accolades for Gloria (the voice of Barbra Streisand, the poignancy of Ali McGraw and the beauty of Raquel Welch) but she won’t give the usher an autograph. Sonny gets fired as her leading man Norman. Gloria is too big a name for Norman. (Ironic how was in the works in real life!) Sonny complains that he knew her when she was small, when she was Gloria Tutu (also true) and sings (actually all the songs are lipsynch-ed) a solo about Manhattan making him a flop, a cad a bum and a drinker. The cast all turn their backs on him when he sings. Like Hollywood turning their back on him. It's an eerie little opera of prediction, this one. He give a big knee-dropping finish. He leaves Gloria with one thought, every star has an enemy: old age he says maliciously. He says, "I don't care what you do to the others, but "this a lousy way to treat your own son!” Double meaning there: that Norman is Gloria's son but also that Sonny is Cher's Son. What a subtext! 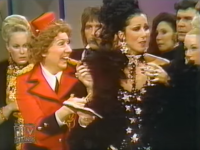 Gloria starts to worry about gray hairs. Next is the production office scene where Gloria starts getting offers for Mother parts, like the mother in the Jenny Lynn Story. Jean the usher comes into defend Gloria in a big number and the producers fall in love with her. Then the usher references Gloria's crows feet and eye bags. 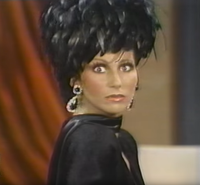 The producers tell Gloria they will always keep a place for her in their theater....as an usher. Cher looks tiny in the usher suit. Jean has become Miss Jean Terrific and gets her own show. Norman comes back and reunites with Gloria. He's a drunk hobo and claims he's making a comeback. Jean sings a song about backbiting jealousy in show biz. She wears the black dress with the yellow boa. At the end of the performance, all the characters bow over each other.

Highlights: There's a hint of marital discord in the opening banter. Interestingly the writers seem to be telling Cher something different subliminally. Instead of those sneaky references to how awesome Cher is and how Sonny isn't seeing that, the skits are now about what a great couple Sonny & Cher are (banter) and what a sad-sack Sonny is (the pizza sketch), almost like a new running subtext. Is this because the couple is "on the ropes" and everyone, including Sonny, is worried about their day job? Suddenly Sonny & Cher are getting a lot of make-out scenes as if to re-spark their affair. The Gloria Majestic opera is eerily predictive of the near and far future...the demise of her partnership with Sonny and all the sequences about aging stars, only from the present we can see how Cher kicked that prediction on its ass. This episode also has a stellar solo number. Interestingly, there's no Concert segment this episode.