Mock Entrance (Video)
Cher comes out with swimmer Mark Spitz who is dressed like Sonny (with a big sparkly S on his shirt). He’s muscular and tall and Cher makes over what she perceives as Sonny’s improvements. Spitz protests that he’s not Sonny and Cher says “if you won’t tell, neither will I.” 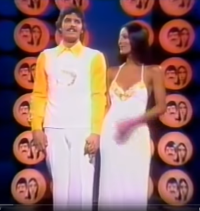 Opening Song: “All I Really Want to Do” (Video)
Cover of Cher's own hit from Bob Dylan (1964)
Sonny and Cher do another full entrance. The floor is very waxed looking. Cher is very tan with shiny hair. Cher is the standard white dress with gold trim at the breast and Sonny is in a yellow shirt and white vest and pants. Cher’s makeup is thick and shiny. They hip bump and shake hands. They sing different lyrics, as if Bob’s weren’t good enough? No, they’re fine. These are not an improvement:

I don’t want to fake you out (Cher)
Egg you out or shake you out (Sonny) (what?)
I aint looking for you to see like me (Cher)
See like me or be like me (Sonny)
Chorus

Banter: They handshake again, cross hands. Sonny says “I didn’t upset the words. You did.” Cher says, “You didn’t upset them. You just did them wrong.” Sonny says, “I didn’t do them wrong, I rewrote them. I am a songwriter you know.” He then claims he wrote that song. O.M.G. Cher says she thought he was a painter, not a songwriter, Talouse Lautrec. Sonny says, “Are we gonna do the monologue are we gonna stab each other all night.” Then he says, “It’s good to see you again.” Oy! All this subtext. His smile is a little manic. Cher asks why he punches her after one of those silly lines. He says, “haven’t you heard of a punchline, stupid?” Their arms are folded. Cher asks, “Have you ever heard of a kick line?” Sonny talks about their guest star, Mark Spitz. Sonny says since they’ve been on television Cher has been trying to destroy his image. Cher retorts that opening his mouth destroys his image. She tickles his mustache and his chin after saying that. Sonny now claims 90 million people are watching. Cher questions that and says his nose should be growing. A few weeks ago it was 80 million. They were not in the top 30 this season (1972-3) so they weren’t getting 80 or 90 million.  Actually, this season was their worst of the three full seasons. And besides, the top rated show, All in the Family, was only getting 20 million viewers. Sonny warns Cher that the audience will tune out due to repetition and he doesn’t want to disappoint his fans. Cher says if his fans watch they’re used to being disappointed. Cher asks about the big S on his chest. She wants to know if that means "Soup or what?" He says “at least his big S is on his chest” which refers to her flat chest.  He says, “you can cut me up because I have the Bono Philosophy. I know people think you’re sharp.” He says her appearing sharp makes him look good. “Because you picked me.” And Cher reflects that this was also the day she bought an Edsel. At the end of the song, Cher flips her hair around to her front just in time for the camera to capture their backsides. 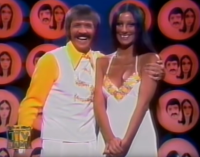 - Little Red Riding Hood: Cher plays RRH in a mini-skirt and Sonny plays a wolf getting transferred to the Three Little Pigs. Spitz comes in as Sonny's replacement wolf, work shadowing him for a day. Sonny asks, “Do you see her goodies?” meaning Cher's basket of stuff but also her girlie goodies. The wolves are dressed in suits, vests and pimp-like vest chains. Sonny pinches Cher's butt and she hits him with her basket  (just like Loretta Lynn in Coal Miner’s Daughter) and her goodies fall out. Sonny says “If that’s your goodies I don’t want ‘em anymore. You’ve been giving me those goodies for 10 years now.” That is in reference to their real 10-year relationship and possible current marital frustrations. Check out Sonny’s brown platform shoes. Spits tries to approach and Cher willingly gives up all her goodies for him. Sonny calls Spitz a bozo for running off with RRH before being able to at least dress up like the little old lady. Some guy in the audience really gaffaws at this.

King Arthur’s Guinevere: Sonny as King Arthur is on the way to a Dragon Hunt and wants Sir Lancelot (Spitz) to look over Guinevere. Sir Lancelot would rather go Dragon Hunting, he says. Cher comes in with a very pretty dress (like the Lady McBeth dress of episode 23). Lancelot decides to stick around when he sees her. She’s in a blonde wig  very bejeweled. Cher makes Spitz laugh. Cher calls in “Teddy” (Ted Zeigler) to do the death scene for Spitz. Zeigler mugs a death scene. Cher insists on dying with Lancelot. Sonny tries to stop her but she yells, "I'm going!" Sonny jokes, “well, when you gotta go, you gotta go.” Sonny claims he wasn’t jealous, just fleeing the dragon. Cher tells him to “tell your mother to go home.” The skit closes with a Sonny stare. 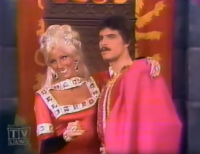 - Sadie Thompson: We’re now zooming into the scene from the ceiling fan instead of the beaded door. Mark Spitz plays an English Channel swimmer who has swam off course to their Pacific Ocean island. Cher tries to bump Sonny over (as she does) but he grabs onto a drunken Ted Zeigler dressed as a sailor. Ted manages to survive the kerfuffle still holding his drink upright. He pours the drink on his cheek. This joke would evolve into the movie Airplaine! (1980) with the famous line where Robert Hays says he has "a drinking problem." (And then Sonny would appear in Airplane 2.) Spitz arrives in a swimsuit and towel asking if he's in France.  Sadie directs him to her apartment instead of back to the ocean. He can swim in my bathtub, she says to Sonny. "And if you’re good, you can squeeze my rubber duck" she tells Spritz but he refuses here and messes up his exit line. This really makes Sonny laugh. Cher fixes the joke. The cast gathers around to comfort Sadie who for once has been rejected. 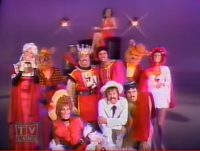 Fortune Teller: The slot is on the left. Cher gives Mark Spitz four gypsy medals. But he already has 7 gold medals from the 1972 Olympics in Munich. So he sells his extra medals to Sonny for $100. They turn out to be made of chocolate.

Concert: “I Can See Clearly Now” (Video)
Cover of Johnny Nash (1972)
They’re in either red or maroon outfits (depending on your TV). For some reason their outfit colors don’t quite match. Cher is wearing a medium-sized 70s-styled Breck-commercial looking wig and gold bracelets. There are lip licks and hand hanging. Cher rocks her shoulders. Sonny is over emoting. Cher looks like she’s gone to her happy place while he does that. Cher flips her mic. They do plenty of whoops. 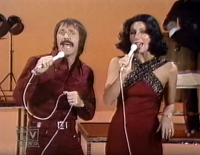 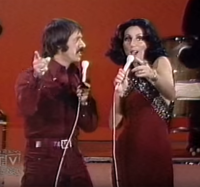 Skit: Sonny & Cher play a couple visiting a sex therapist's office called Masters & Bronson. That was the acceptable therapy back then. Today, you’d just go to a couple’s therapist. They’re having marital problems. Sonny looks like his future Alvie character with slick-backed hair. Cher wants to have more fun and Marvin (Sonny) won’t wear the Bugs Bunny outfit. They’re both provided with surrogate partners. Sonny gets a blonde bombshell nurse and Cher is chased around the office by Ted Zeigler dressed as a bunny.

Solo: “You’ve Got a Friend” (Video)
Cover of Carole King (1971), James Taylor also did his iconic version in 1971.
The first solo spot to break out of the big bulb, torch-club look. There are abstract square cut-out transitions that reveal Cher in a wicker chair that swerves around to show her dressed as a 70s version of a southern belle in pink, white and green. The music is very ominous. There’s a big fern in the foreground (love ferns!). The whole set is a wicker catalog. This rendition is kinda plodding. She smiles at the end.

IGUB: Four year old Chastity has a big C on her shirt like Sonny’s S from the opening number. They ask if she went to school today. She says she didn’t go. Cher says she takes after her Daddy. Cher asks if she’s going to be a singer like her dad. Chastity emphatically answers No! Sonny says, I’ll mustache you. And she says no again. Sonny says his mustache affects “your mother the same way.” Looking back, it’s easy to see these gender questions as prophetic. And possibly the subtext we see all over this show is just a bunch of  rationalizations provided by hindsight. But in any case, these sparkles of unknown irony give the show a some groovy mysticism. To see these ironies appear after all these years is like some sort of reappearing ink. Sonny tells Cher to “Hit it, Mama!” as they start their song.

GetTV is missing Headlines in the Papers.

Highlights: More asides that reveal their marital situation. Mark Spitz dressed as Sonny is adorable. There’s a “friend” theme to the musical numbers.