Opening Song:  “Jackson” (Video)
Cover of Nancy Sinatra and Lee Hazelwood and also June Carter Cash and Johnny Cash (1967)
Cher is in a Hawaiian looking halter-top  pantsuit or maybe a skirt (I can’t tell). She looks very, very tan. Sonny is in a green jacket and pants. Sonny is wearing longer hair.

Banter: Sonny punches the air after they finish. They do the cross-handshake again. Sonny has a new necklace on.

Sonny says people have been congratulating him on the success of "his show." He says he hasn’t done it himself, but he attributes it to…(he looks at Cher) ….luck and God. God was looking out for him, he says. Cher wonders who was looking out for her. Sonny says he’s blessed with a great singing voice and Cher quips, “Well the Lord giveth and the Lord taketh away.” Lots of TV biographies like to show the clip of that joke. Sonny talks about his father’s lucky rabbit’s foot. Cher’s red nails are very long. Cher tells a story about their first date to Mount Washington in New Hampshire and hot hot it was and then admits that was someone else. Sonny says, all joking aside, he’s lucky to have a show, a beautiful daughter, house and wife. He affectionately calls her Pocahontas again and talks about drinking champagne when they get home and going to bed for an amorous night. Cher tells Sonny, “that’s when your luck runs out.”

Skit: Sonny & Cher (in a black dress and big hoops) introduce Mike Connors from Mannix. Sonny goofs the intro. Connors plays a guest lecturer (just like Jean Stapleton a week or so ago) trying to explain the California governor’s plan for a high speed rail train (it’s still not done in 2020 after many plans). The skit is full of government speak. He unveils a tiny toy train and it doesn’t work. This is a skit about perceived boondoggles. Usually people accuse public transportation projects of being "boondoggles," but the complainers are never the people who depend on cheap transportation for getting to work. Often the phrase "tax payer dollars" is invoked by the people with cars. Similar to the Jean Stapleton lecture, there’s a Sonny dummy abused in the sketch.

Concert: “Rockin’ Pneumonia and Boogie Woogie Flu” (Video)
Cover of Johnny Rivers (1972) which was a cover of Huey ‘Piano’ Smith (1957)
Some trivia, the Johnny Rivers’ version used the Wrecking Crew as his backing band. Sonny wears a green pantsuit with a big gold belt and Cher is in green or turquoise (depends upon your TV) and gold-trimmed dress with huge gold earrings and a pretty braid through her shorter wig. 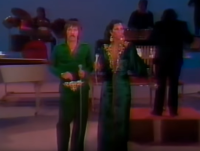 Cultural Spot: “Sonny & Cher at the White House
Freeman King does his introduction in the leather chair. This musical number is in honor of the inauguration of Richard Nixon. This is a skit about how anyone can become president. Teri Garr plays a reporter. Sonny plays a Senate candidate, which is an ironic foreshadowing because Sonny actually did run for the Republican Senate seat in California in 1992. Bruce Herschensohn won the nomination instead of Sonny but, according to Sonny’s Wikipedia page, they became close friends after the race. Democrat Barbara Boxer ended up winning the seat.

Sonny marries a “lib reporter” played by Cher (wearing all yellow, even her eye glasses). The conservative-liberal split in the skit is indicating how Sonny & Cher themselves have grown apart politically. Sonny has become conservative. Cher has stayed liberal. Sonny is criticized for having “no comprehension” and someone else deducts, “He’s perfect.” There’s a John Wayne joke, lots of Washington D.C. jokes. Feeman King plays a judge. The skit portrays the hysteria around an election.

Citizens are carrying signs labeled “short power” and “Cher the wealth.”  Interestingly both Sonny & Cher are elected president! Cher in a fur coat and Sonny in a politician's suit sing “I Can’t Believe We Won the Whole Thing” which is a play on the AlkaSeltzer commercial of the time. There are sex jokes about “what America wants.” In the next scene Sonny & Cher are wearing white furs and silver top hats. They sing a song called, “Fun  for the Next Four Years.” The U.S. Capital is now a movie palace. The Senate is portrayed as a gay nightclub. There’s a Spiro Agnew joke. Sonny & Cher are lax with taxes and give all the gold away.

Mr. and Mrs.: This is the skit about women’s liberation where Cher is the working woman and Sonny plays the homemaker. This will become “Battle of the Sexes” in their reunion show of 1976-7. This is Mr. Cher Scholar's favorite skit from the shows. The premise probably reads as clunky and sexist in hindsight but I think the point of it at the time was probably to illuminate the points of view of both women and men (and their respective stereotypes) and to lessen the tensions around feminism rising up at the time and women entering the workforce.

Sonny is home cooking when Cher comes home late from work. Sonny is suspicious about her lateness. There’s a “little lady” joke. Sonny says, “a man’s work is never done.” He inquires into all the office intrigues. Cher says she was late due to highway traffic. She says she works hard “for lifts in your shoes” which is a joke about Sonny’s height. Sonny says he feels he lacks an identity and feels unfulfilled. He says he feels like a sex object. There’s a London flu joke (which I had to look up) referencing the 1972 flu in the U.S. (It's eerily similar to how some people are calling the pandemic of 2020, the Wuhan or Chinese Coronavirus). Sonny might be pregnant and is craving pickled pizza, which is a joke about his Italian-ness. 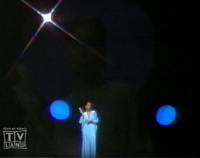 Solo: “Bridge Over Trouble Waters” (Video)
Cover of Simon and Garfunkel (1970)
Cher has acne from bad makeup and stress. There’s a blue light behind her. She wears silver medallion earrings, some amazing turquoise bracelets, and hair styled Diné(Navajo)-style but with a ponytail. She's wearing many rings and a simple, blue dress. Her nails are long and she really Cher-ifies “Sail on silver boy” and she tries to put some soul in at the end to dubious effect. A little oversung but she looks great. The Native American appropriation is seems much more subtle here than the Half Breed design, and yet the younger generation of American Indian viewers would probably take issue with Cher wearing a take on a traditional symbol of Diné power. Representation on television in the 1970s was a step forward, but it wasn't far enough for those looking back in 2020, where it would be preferable for only Diné women to wear such a look. We are not living in days of cultural sharing like we were in the 1970s. 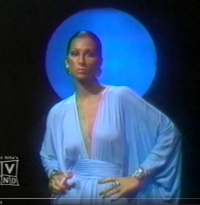 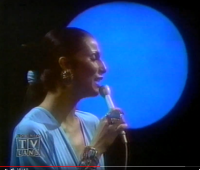 Villain/Vamp (Video)
Sonny & Cher talk to Mike Connors about changing the Vamp sketch to the Villain sketch because Connors played many movie villains before his TV show Mannix. Mike jokes that some villains go into TV as actors and some into politics as actors. Mike plays the piano in the intro and Sonny & Cher sit atop the piano. The song lyrics are updated and Sonny sings along to "He was chillin, killin. He made the movies thrillin."

- Gangster Boss: Connors plays the gangster boss and Cher plays the doll among goons. Sonny plays a federal agent and they plot to put his feet in wet cement. Sonny thinks this means they’re taking him to Grauman’s Chinese Theater.  Connors gives Cher a kiss at the end and they mug.

- Gestapo: Connors plays the gestapo and Sonny is the prisoner. Cher as Helga wears a German leather outfit (the one pictured in the 1973 Rolling Stone expose) and she’s torturing Sonny with an album of his own singing. They do a Simon Says joke. The gestapo just wants tickets to Bob Hope’s Christmas Show. Cher looks really thin here. The skit ends with a Sonny (and Cher) stare (and smirk).

-  Evil Court Advisor: Connors is trying to gain control of the Spanish throne. Queen of Spain is played by Cher. Connors makes her crack up. Sonny is the loyal guardsman.  Cher says, "This is a black moment for Spain" and Freeman King nods yes. They say it again about acting and humor and each time pan over to King for his look of dismay or disgust. I can't tell if this is progressive or regressive. I wish Freeman King were here to tell us his thoughts. 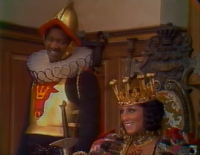 Home Movies: Sonny & Cher sing “Something” (cover of the Beatles from 1969). They’re both in baby pink outfits. Sonny sings to images of Cher which include Cher in a white dress and hat, Cher with a ribbon in her hair, Cher dancing around their turret (for real?), Cher naked beneath a sheer dress with sunlight shining through. Cher sings to images of Sonny and Chastity. It looks like their swimming pool has fish and stars painted on the bottom. I am very sad there is no video for this online.

IGUB: (Video, 8:15)
Sonny asks Chastity to read her own shirt (which says Chastity). Chastity jokes that Sonny can’t read. Sonny says, “Well! You’re getting more like your mom every day!” It’s adorable and kinda sad that they weren’t really getting along during this awesome cuteness. You can see Sonny is really laughing and then you can see him say to Cher “sing your song.” Cher is very thin, even for the 1970s. You can see her ribs. It’s moving to see Sonny’s face when he sings, “At least I’m sure of all the things that we got.” As if he doesn't anymore.

Highlights: The Cultural Spot predicts Sonny’s Senate run in 1992 and Sonny & Cher’s diverging politics. The shows writers seem to be implying that they can still “both win” if they work together. Great home movies sung to “Something.”