Opening Song: “Lodi” (Video)
Cover of Credence Clearwater Revival (1969)
Sonny’s in a white casual suit. Cher is in an orange strap dress and round silver or white earrings and she’s still very tan. You can see side boob. Plenty of hand hanging and hair flip. This time she tells Sonny to “hit it!” 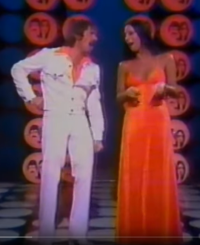 Banter: They do the double shake and then Cher does a twirl. Sonny asks her if she’s gonna be nice tonight. Wonder what that's about. He says he has good news. Cher calls him her precious darling. Cher says she’s all ears and he says "all nose maybe." Sonny talks about something that only comes around once a year. Cher says "not tonight H have a headache." Then it gets weird. Sonny says something even more exciting than that, Parcheesi. And Cher adds “taking out the trash.” This feels a bit personal here but they both laugh it off at the end. Sonny talks about his top movie pics of the year, including The Candidate with Richard Redford. Cher tries to correct him with Robert. Sonny summarizes the movie and Cher calls it the 1972 elections. Richard Redford is referring to Richard Nixon. Sonny snaps his fingers and slaps his hand and jokes about his showmanship. Cher makes a Tom Thumb joke. Sonny gets a big applause and says, “there’s a lot of Italians out there.” Cher says, “Italians, you can’t add but you multiply” a joke on the big families of Italians. Then Sonny mentions Planet of the Apes and complains about one hundred pornographic movies. Cher jokes that he’s seen them all. Sonny says he’ll "get around" to her opinion. Cher says she liked “Shaft” and Sonny says that movie was out last year. Cher says, “living with you shaft is every year.”  Sonny tickles her after their final performance of the song ends. 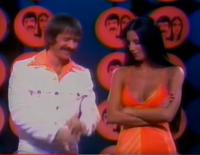 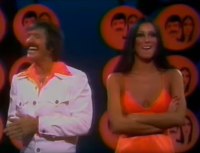 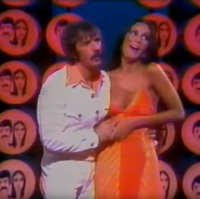 Sonny’s Pizza: Merv Griffin plays a detective trying to find a ring of robbers doing neighborhood hold ups. Larry Storch impersonates a Godfather-like Marlon Brando gangster, but he’s not the criminal. It turns out to be Teri Garr and Murray Langston as two elderly bandits.

Headlines in the Papers: Topics include compact stereos, the Catholic Church, police officers in drag, the doctor shortage, Bob Hope’s announcement of his last Christmas show for U.S. troops, Merv plays the head of the CBS network, there's a bomb at Jane Fonda’s house, wheat for pandas, Larry as a Groucho Marx-type doctor, the Apollo. Sonny does an Irish brogue.

Skit: Merv Griffin and Sonny play two seagulls trying to cash in on the popular book Jonathan Livingston Seagull by writing their own books. There’s a Peter Finch joke, a Walter Pidgeon and Admiral Bird reference. Sonny writes Dove Story. Lots of bird puns. There’s a Johnny Carson statue for the birds to dump on. I’ve starred this one.

Cartoon: John Wilson’s “Love Story” (Video)
Cover of Randy Newman (1968)
This is an odd song about a couple, their wedding, midnight sex, and lines like this:

“we’ll have a kid/or maybe we’ll rent one/he’s got to be straight/we don’t want a bent one.”

As opposed to a straight one? What else can you think? Sonny & Cher are depicted as the 1970s-era couple moving through life. 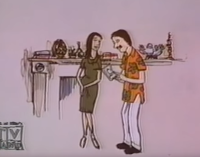 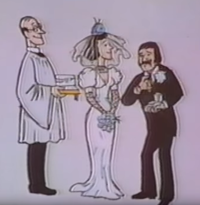 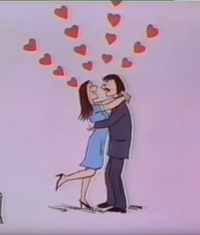 The couple considers adopting a black son who they imagine “may be president if things loosen up” (which makes you think of Barack Obama). 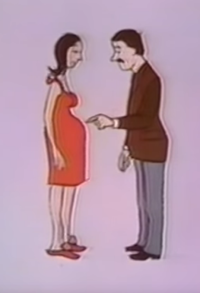 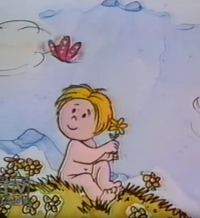 The family drives through typical John-Wilsonian landscapes as they move to the city. There’s a image of Cher with her hair askew as Sonny sings, “You think you’re plain; I think you’re pretty.” This image predicts the Moonstruck makeover scene. 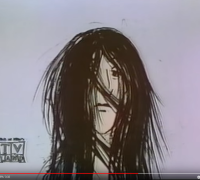 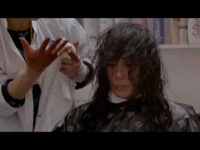 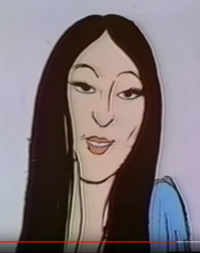 They couple grows old and it looks for a time like their living room might be on fire. They get sent away to a home in Florida by their kids. 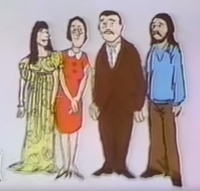 Interesting depictions of how Sonny and Cher would age.

Fortune Teller: The slot is on the right this time! I knew it moved. Larry Storch plays a French con man trying to sell Sonny a watch. Cher tells Sonny to beware of con men.

Solo: “Someone” (No video!)
Cover of James Taylor (1972)
Cher is in a baby blue and white dress. Another odd song that was hard to track down online. I didn’t make any notes about it. Boo me!

Concert: “Brother Love’s Traveling Salvation Show” (Video)
Cover of Neil Diamond (1969)
Cher is wearing a white fringe halter dress (lots and lots of cool fringe) and a shoulder-length bobbed wig. Sonny wears a casual white shirt, black suit and a lose tie. They play with green screen on the skin of a the tambourine. Sonny does his extended, additional Sonny’s elixir intro, just like their record version to come out this year in June. Cher sounds great under all that nasally shouting. Have I mentioned I love those white microphones? 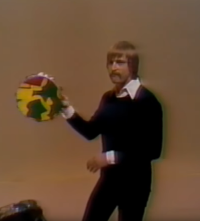 IGUB (Video, 9:36)
Chastity is dressed like Sonny this time, in a white pantsuit. Very cute. They talk about her haircut and Sonny says she’s looking more like her father every day. Cher asks “What do you think about that?” and Sonny adds, “You wanna look like me?” Chastity says “yeah.” Cher asks if Chastity had a choice to look like Sonny or Cher, which would she pick and she points resoundingly at Sonny. Sonny says she can’t look like him without a mustache but she insists, “I can still look like you when I was married.” How can you not read this with irony?? This is really adorable. Cher advises Chastity that Sonny will get too old for her to marry. Chastity says she will get old too just like her Dad and marry him and Cher asks, “What about me.” “I’ll come and see you,” Chastity says. Sonny really laughs at this. “Sing it, mom” and they sing their song. He tries to tickle her again during the song. Cher plays with his coat buttons. It seems affectionate. This is a very charismatic family unit. 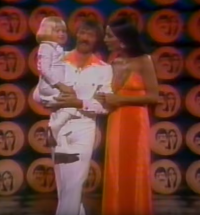 Highlights:
Jokes about Italians occur as often as Indians. Neither sound so great now. Also impersonations of the Irish and the French happen. The "Love Story" video, like many of the closing segments makes you look back and then forward to the eventual transition of Chastity to Chaz Bono.