Opening Song: “I’ll Follow the Sun” (Video)
Cover of the Beatles (1964)
Sonny is in a bright blue suit with a yellow shirt. Cher is wearing an orange pantsuit with big hoop earrings. There’s lots of pointing. Is Sonny wearing five necklaces?? He’s got more bling on than Cher! Although she's wearing a big ring. Sonny can't look at her when he sings the word one in "Some day you'll know I was the one." He could just be looking at the cue cards, though, trying to follow the next line. He does muff a line and it makes him smile. 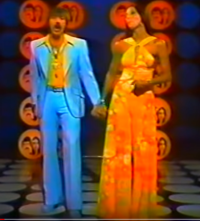 Banter: Cher goes to shake Sonny’s hand but Sonny is diligently writing something in a little black book. Apparently, like Churchill and Eisenhower before him, Sonny is writing his memoirs, a book he’s dubbing “The Bono Papers.” His actual memoirs came out in 1991 and were titled And the Beat Goes On. Sonny says, “The little goombah is gonna name names!” He says he hopes his memoirs will turn into a movie. Cher asks who will play him, Donald Duck? And Sonny responds that he hopes “Steve McQueen will be me.” Cher quips, “Yeah, so did I.” Sonny reads a list of his accolades, including the inflated Nielsen numbers for the show and Cher calls his book “faction” meaning part fiction, part fact. Sonny tells Cher not to worry, that he mentions her in passing: “I passed by Cher today.” This is rich, considering in Sonny’s eventual memoir all but the last 30 pages deal either with his childhood or his life with Cher. The last 30 pages covered two wives, his acting career, his career in restaurants and running for Mayor of Palm Springs (from 1975 to 1991). This could be the cuts of a good editor, knowing Cher is the name to be named, but still. Whole marriages get edited down to a paragraph.

- Tokyo Rose: Jim Neighbors plays a captured army soldier. Cher plays Tokyo Rose trying to break him with her sensuality. She wants to find out who is sergeant is. The male cast, including Cher, is made up with Asian makeup (probably the most egregious thing I’ve seen on the show) and doing a comical Japanese accent. Neighbors accidentally gives away Sonny as the sergeant, Gomer Pyle style. The scene ends with a Sonny stare.

- Klondike Annie: It’s the gold rush and Neighbors plays Sargent Preston of the Mounties, a Canadian official trying to arrest Cher as Klondike Annie because she drives men mad. Cher is playing a full-on Mae West with her hair and dress. There’s a joke about cold gold nuggets. Ted Zeigler arrives mugging as crazy to prove Annie drives men mad. Annie ends up running off with Preston in the end. Sonny gives us another Sonny stare of disbelief.

I notice in the green screen of all the characters, the Klondike Annie characters seem too large.

Mr. and Mrs.
The couple meets in a bar for their wedding anniversary. Sonny talks about the shopping he did that day. Cher says she can’t do an anniversary dinner that night because she has to go back to work. Sonny explodes and goes to cry on the shoulder of the bartender, Ted Zeigler. Sonny orders a pink lady. “All women are rotten,” he says. “They’re only interested in one thing. Then they walk all over us!” Finally, Sonny goes back to the table where Cher has some flowers waiting for him. Sonny protests, “I’m not that easy” and “I’m expecting a headache tonight.”  Cher says, “How could I forget about my little man?” and says she cancelled her work for the night. Cher promises she’s going to ring his chimes tonight.

Solo: “Just for a Thrill” (Video)
Cover of Ray Charles (1960)
Cher wears the black and white doll dress (with black feathers instead of a white poof). She sings against a black background. You can’t see the full dress for all the Vaseline smeared on the lens. You can see the early signs of Cher-attitude in her eyes. She really performs it, especially at the end. A great example of her torch. 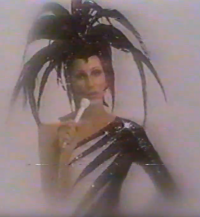 Cultural Spot: A Canadian-India Opera to Rock and Roll Music.
We're introduced again by Freeman King and his parents from a theater balcony. They’re ancient and one parent is covered in cobwebs. King insists that, like much on Network TV, this cultural spot has no significance or redeeming social value. Princess Running Home has turned down the marriage proposal of the local witch doctor played by Jim Neighbors. This is a good time to point out this skit is a mess of a mishmash concerning a fictional Indian tribe. They live in the woods and there is both a tee pee and a totem pole. I’m no expert here but tee pees were used by plains Indians who traveled around the United States and didn’t have the means (semi-trucks) in order to carry heavy totem poles around with them. And I’m sure there were healers of some kind in many tribes but "witch doctors" are more associated with African and Eastern Indian healers. So this is kind of lazy and embarrassing writing. Princess Running Home’s true love is Sonny, a member of the Royal Canadian Mounted Police. Everyone wears buckskin (like Daniel Boone?) and they sing a pow-wow with “oogabooga” words which is totally wrong no matter how you slice it. Ted Zeigler is the “Big Chief” and he does bad miming of sign language.

(Ok, this was the early 1970s but they could have tried A BIT harder than throwing every Indian cliché into this skit. Maybe that was the joke but they also threw in stereotypes of other native cultures and that’s just weird and lazy. I guess this is why the skit was stripped from the Time Life collection last year. I’m torn about that. This type of stereotyping was all over 1960s and 70s TV and can’t we just own up to it and learn from it? I guess re-releasing the skit is just perpetuating ignorance but it is what it is. No show looks perfectly correct looking back so why pretend. I don’t know the answer here. As a completest I want to see the good, the bad and the ugly. But if you’re working on a brand and image management, you might see it differently. And who wants to keep putting out things that are upsetting to people? This is where the Entertainment Biz and the History of the Entertainment Biz conflict.)

Jim Neighbors, the witch doctor, sings. He looks orange. This is another issue. He kind of shows off singing in that weird way of his, "To know, know, know me is to love, love, love me (cover of the Phil Spector song “To Know Him Is To Love Him” by The Teddy Bears, 1958). They worry about the buffalo being gone and want buffalo chips for the poker table. (In the context of all this, I worry if the show knows what buffalo chips are but maybe they did). Cher comes in very demure, with long hair and white barrettes, wearing a fringed white dress. Sonny plays Melvin H. Something (I couldn’t catch it) and Neighbors threatens him. Sonny is dubbed singing opera and then he really sings. Cher speaks in broken English. She makes a joke that Sonny’s mother looks like a buffalo and so his mother will bring all her friends to the wedding. The Indians all like that and agree she can marry Sonny. There’s also a "nice Jewish boy" joke. On the positive side, the skit is promoting a mixed community and intermarriage. They also sing "Blue Suede Shoes" (cover of Carl Perkins, 1955 and Elvis Presley, 1956) and "Big Bad John" (cover of Jimmy Dean, 1962)  and "On Top of Old Smokey" (American folk song, turn of the 20th century) and a few other songs I didn’t catch.

Fortune Teller: Sonny starts to sing Frank Sinatra’s “My Way” but muffs the lines. The Fortune Teller cuts in (slot is on the left) and Jim Neighbors comes by and says Goll-EEE. That’s his trademark saying from his show Gomer Pyle, a show for some reason I watched religiously after school but never liked. Cher tells Neighbors, “and now for the bad news” as Sonny approaches. Neighbors says he thinks Sonny’s singing is real funny. In a huff, Sonny promises no more solos on the show.

Guest spot: Jim Neighbors sings “Goodtime Charlie’s Got the Blues” with his crazy church-like voice. He sings from the set of a junkyard or gas station with spots of snow on the ground. He’s also in a gas station jumpsuit, like Gomer once wore on the show The Andy Griffith Show.

Concert: “Listen to the Music” (no video!)
Cover of the Doobie Brothers (1972)
Sonny and Cher are in a brown suit and dress. Cher wears a secretary wig and an arm band. This is their worst cover ever.

IGUB: They ask Chastity if she’s gonna grow up to be a vamp. She says yes. Sonny asks her if she’s a fox. She says “No, I’m not a fox.” Sonny says, “your mom’s pretty foxy.” Chastity insists, “No she’s not!” Sonny says, “I’m pretty foxy,” and she blurts “No!” Sonny tells Cher to “sing it for the people” and they sing the song.

The Time Life episode is missing the Cultural Spot, a Canadian Indian operetta with rock music.

Highlights: Sonny talks about his fake memoirs. Cher does another Mae West impersonation. The fabulous "Just for a Thrill."