(My copy is damaged so this is a partial recap until I get a better copy.)

Opening Song: “Jambalya (On the Bayou)” (Video)
Cover of Hank Williams (1952)
They’re celebrating Valentine’s Day so Sonny wears white pants and shirt with a red sweater vest. Cher wears a white skirt and white halter top with a heart sewn on her left boob. She’s very tan and has on thick white hoop earrings. Lots of hanging hand. As usual, Cher seems more comfortable with country and western than Sonny does. The audience claps along. 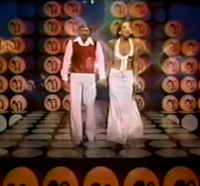 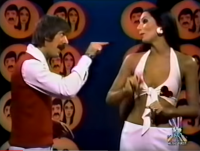 Banter: They do the cross handshake and each take gratuitous extra bows. Their banter seems uncomfortable. Sonny says they have great guests for both men and women. For women, Joe Namath. "For the men"  and here someone in the audience interrupts to say they have Cher for men; but Sonny says "Cher’s for me." (But is she at this point?) and then Sonny mentions the Playboy Playmates. They talk about Valentine’s Day gifts. Sonny says Cher forgot to send a gift to the man she adores and Cher worries that Joe Namath didn’t get the flowers she sent him.

Sonny jokes about last year getting Cher a chocolate likeness of himself, a chocolate Bono and Cher says it’s almost impossible to find chocolate-covered garlic. She punches him in the leg. Sonny says he’s received a beautiful valentine from a fan. Cher jokes that a man sent it in (a joke which falls flat today). Sonny complains the playmates are around him everywhere he happens to be, even when he’s dressing; and Cher accuses him of hanging out in their dressing room. (Sounds Trumpy.) Cher leaves it with a joke about how much taller the Playmates are than Sonny is.

Skit: Joe Namath reads poetry about the months of the year as the Playboy Playmates parade by him in month-themed bikinis. His reading is pretty stilted and he forgets and goofs parts of the poem.

Then Hugh Hefner comes out and the Playmates jump all over him instead of Joe Namath (this must have been written in the contract, right?). Namath looks sad and complains, “ 12 passes and no completion.”

Solo: “My Funny Valentine” (Video)
Cover of Rodgers and Hart Musical Babes in Arms (1937)
Cher wears a red coat and dress. She’s wearing lots of makeup and her skin is breaking out and shiny. Her hair’s in a simple bun and she’s wearing red earrings. This is one of my favorite torch performances Cher has ever done. Can’t say why. It's just been stuck in my memory longer than the others. I just the think the song is better for her doing it. The coat is odd though; is it hiding a dress the censor didn’t like? There’s something pretty sparkly under that coat. 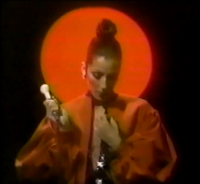 Sonny’s Pizza: Freeman King leaves the pizza parlor with a date who is Caucasian. This feels significant for the early 1970s. Cher wears a pink outfit with a heart pinned on her chest. Cher as Rosa complains Sonny works too hard and won’t take any time off. So Sonny takes a few seconds off and then is crabby to his workers. Joe Namath comes in with a pretty blonde date. Sonny claims to recognize a famous football player: “that hair, that nose, those gimpy knees.” Rosa says, “I give up, who is she?” Sonny says that he sees a “swinging bachelor” and Rosa asks, “That’s Henry Kissinger?” The bus-boys are nervous around Joe and break all the plates. Sonny tells them to not bother the celebrity and let him eat. Sonny then sits in Joe’s lap. Joe makes an Edgar Bergen joke and says “I found a new dummy.” Cher ends up running away with Joe; he takes her “to go.” The blonde now speaks but with Freeman King’s voice. She’s really a football player. It all ends with a Sonny stare.

Concert: “It Never Rains in Southern California” (Video)
Cover of Albert Hammond (1972)
The drum kits sport the cartoon of Sonny & Cher. Sonny is wearing a white 3 piece suit and bow-tie with a pink shirt underneath it all. Cher is wearing a Copacabana-styled outfit with big pink ruffles and multiple big bows in her ponytail. This versions seems slower than their album version. It’s a pretty grim performance.  At the end you can see the pink bows go all the way down her hair.

Musical Finale: (a dating substitution for the Vamp): Cher, Joe and Sonny sing around a fountain about dating rules and tips to introduce skits. Cher wears a Victorian dress and a Victorian wig with little curls around her face. Sonny wears his black suit. First they ask Joe why he’s never been married. Joe says he doesn’t know how to pick up girls. Sonny says he’s an expert at picking up girls. Cher gives him a look and he says he’s a “former expert.” Truth alert: he was no former expert and was probably picking up girls at that very moment. Sonny tells Joe he ought to be “mean and cross and boss” and Cher disagrees. These skits turn out to be actually good tips and precautions.

- Cher plays a librarian trying to come on to patron Joe, who wants to borrow a book about picking up women. He misses all her cues. She even feels him up. He leaves in disgust. Turns out she’s been trying tricks from a book called How to Pick Up a Man. I love the equal opportunity here.

- At a party Sonny comes on to Cher. She’s in a white dress with a white feather boa. She plays hard to get. Turns out she’s Joe’s girl. The whole skit is a play on song lyrics, something Cher would do again in her 1978 special in a skit with Dolly Parton.

- Ted Zeigler is on a subway with a girl. He sprays his mouth and comes on to her. In disgust, she leaves. He says his deodorant must not be working.

- In the back of an airplane, Sonny obnoxiously comes on to the flight attendant, Cher. She’s in a red dress. He grabs his briefcase (and I just had a flashback of Sonny in Airplane II) when Cher tells him it’s time to deboard the plane. He exits the plane and they’re still flying over Chicago.

- It's a bar full of Playboy playmates. Joe plays a sheik who he tries to pick one of them up with classic pickup lines. In unison, they all say they have a headache.

- Cher and Joe are working overalls with a country apple cart selling apples. Gum chewing Cher has her hair in two braids. Even though Cher is a tomboy, Joe seems to be realizing she’s a viable date and asks her out to dinner which she readily accepts. He says “we can go out to dinner and then pick up some girls!” Wah-wah. Cher is rarely the loser in a skit so this is an interesting twist.

- Sonny, Cher, Joe, the regulars and the Playboy playmates are all singing in a church choir. Sonny seems to not really be singing. He gets mad at something and says he’s quitting the choir and they all cheer. The enthusiasm for the cheer seems to surprise Sonny and he can’t stop laughing.

They end the skits with the moral sung by Cher, “If you don’t succeed, give it another wack, Jack.”

Skit: The cast stars in a local news skit (Freeman King plays a nerd) talking about token newscasters on news programs and real diversity. Susan Donovan plays the mysterious female newscaster. This is the only skit I can think of that didn’t include a guest or Sonny or Cher.

IGUB: Chastity says goodnight and Sonny says, “You’re just like your mom.” (meaning smartass). “But you look like me!” Cher says no. “Where’s your mustache?” Chastity says she shaved it off. (OMG, here we go again!) Cher reminds Chastity of when “you were gonna be a football player.” Cher says she’s leaving with the playmates to go to a party Sonny wasn’t invited to. They sing the song and Chastity does more funny conducting. Chastity is wearing cute white boots.

Highlights: Cher’s performance of “My Funny Valentine” is a classic of the show. This seems like an unusually long show. Cher shows that she’s not jealous of any of the Playboy playmates, even entering their party circle at the end of the show. This feels significant, not the typical suspicious wife we saw all through the 1960s.