Peter Cullen is their announcer. 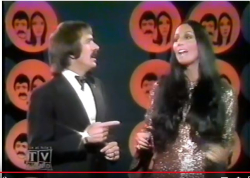 You can hear Sonny yelling to Cher, “Hit it Lady.” Cher in dressed in a gold dress with her hair curled and hanging in front. Sonny is in a black suit (again). Cher said Sonny always had beautiful hands and you can really see them here, with lots of pointing. They both wear lots of rings. Cher is wearing a big rock. The stage is still small, seen from the side. The don’t sing “give a damn” but instead a censored version, “give a da da da da da.” Cher hanging hand happens. There are lots of whoops at the end.

Banter: This is one of my favorite openings of the show for many reasons. One is that the comedy feels more unscripted and improvised. The structure reflects back on their nightclub act with Cher singing on, unable to end the song and Sonny trying to find a way to break back in. Cher goes fully a Capella by the end. Sonny then starts talking about logic and deductive reasoning, while bungling the pronunciation of syllogism (which is pretty funny...until Sonny blames the show staff for the situation). Sonny is using logic to speculate about Sonny & Cher going from a summer replacement show to become a legit, mid-season replacement series (which they did).

Cher makes fun of Sonny for being a dummy. Sonny points a lot and Cher makes fun of his pointing. Sonny claims he’s reading philosophy and learning to ask "how do I know I exist?" Cher makes fun of Sonny smelling like beer and wine and that's how we know he exists. This elicited a laugh in our house. When Sonny trips on the philosophy terms, Cher calls him a "mush mouth." At the end of his long setup, Sonny invokes the Nielsen ratings and punches Cher on the punchline,. He calls himself the “little goomba.” Cher has memorized her complicated rebuttal about logic, calling his logic “Italian.” Sonny asks her, “Do you know stupid you think I am?” The both crack up at his latest blooper and it feels very fun and affectionate.

Guest spot: Merv Griffin “Get Together” while Sonny plays ping pong in the background and the games turns into a fight. 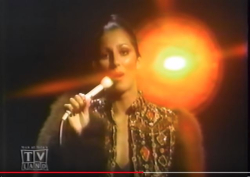 Cher solo: “Stormy Weather” (video)
Cover of Ethel Waters, 1933. According to Wikipedia, “Ethel Waters first sang this at The Cotton Club night club in Harlem. There's a big orange light behind her head and she's wearing the same jacket as seen on the cover of the Superpak Vol. 2 album. Some of my friends see television episodes of Cher from the 70s and they ask me when she fixed her teeth. This was about 1985, after Mask but before Witches of Eastwick. She does her signature teeth licking here and sports a big bun of buns. I love this style! These early torch numbers sported bad lighting and too much makeup on Cher, leading to acne. She wears a very pretty black slip dress you only see at the very end. 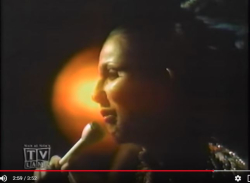 Skit: Cher talks about fan letters written into the show. Sonny comes out as superman and tells Cher she is his Lois Lane and only kryptonite could kill him. Cher pulls a chord and a prop piano falls on Sonny's head. They had few sets in these early days, the budget must have been so low for this still a try-out show.

Skit: Sonny sings “Be My Love” and talks about elocution. Cher is in a red cape. They claim The Carpenters are their next guests and construction workers appear onstage. Har har. These are some early lame moments.

Guest Spot: Merv sings around statues, “What Are You Doing the Rest of Your Life.” 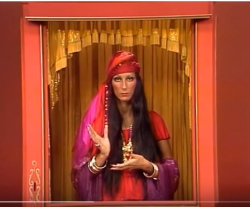 Fortune Teller: The slot on the left. Sonny is fooled again. Cher speaking with a Romanian accent.

Skit: In a bit of meta television, Merv Griffin talks with Cher, explicating the architecture  of the Sonny & Cher banter in a kind of “school of comedy” way, how Cher cuts up Sonny. Cher has big hair and hoop earrings and a long white dress with a silver butterfly. Merv talks about Sonny & Cher being discovered by CBS exec Fred Silverman while they were guest hosting his show and how he’s also “discovered” Johnny Carson and Dick Cavett that way. Cher mocks his toupee, illustrating her cut up technique, used against bragging men. Very #metoo in hindsight. She never used this technique on women guests.

Solo 2: This is the only episode I can recall where Cher gets two solo numbers. In this amazing thing (which is oddly not on youtube yet), Cher (in the same white dress as the previous skit) and the Jimmy Dale Orchestra do this elaborate big-band tribute to a medley of "Strike Up the Band," "Alexander's Ragtime Band," "Sergeant Pepper's Lonely Hearts Club Band," "Play a Little Samba" and "Funky Nassau." It’s pretty incredible. Mr. Cher Scholar overheard it and said it was “like a jazz odyssey. It’s Cher versus the horn section," he said, "and the horn section lost!”

The Sonny & Cher Myth: So there were various skits throughout this series that tried to go behind the scenes into the private life of Sonny & Cher. This was very forward thinking at the time. This was before the huge phase of reality TV where fans could get inside information on their favorite celebrity...ostensibly. It’s all television, right.

Sonny & Cher did various skits and slide shows, sometimes poking fun of their own reputations, as in this sketch which is all a farce about how rich they are. They even claim the purpose of this sketch is to “clear up exaggerated stories.” Ellen DeGeneres does something similar in her 2019 Netflix comedy special opening, talking about her “relatability.” Same thing, here. Sonny & Cher are trying to stay “relatable” with some wink-wink hyperbole. It's all meant to imply the situation is not this decadent. It doesn’t quite come off for me.

In any case, Cher appears in a white fur and jewels. Even her hair buns have jewels, which is pretty awesome. Ted Ziegler plays their agent and refers to them as “major stars,” which they were, experiencing a “shower of money,” which they were, "enough to buy Jamaica!" He also refers to them as “you two kids.” This is a Sonny & Cher trope going back to the 1960s. In the movie Good Times they’re referred to as kids, but Sonny was never a kid. He was just glomming on to Cher’s kid-ness.

They say things (completely in jest) like “as long as we’re rich, we’ll never be boring!” And it kind of feels a bit uncomfortable, the wink-wink part anyway. Because maybe there’s too much truth in it. But then they plan a musical of their life story! And hey, it’s 2019 as I’m writing this and Cher really does have a musical on Broadway about her life story, so how weird is that? Their line of maids is the chorus line. (That’s not in the Cher musical).

The skit ends with Sonny showing a picture of what Sonny & Cher are really like at home and you see them bowling. But that just seems like another untruth. Part of the breakup of their relationship, according to Cher, was the lack of their doing fun things anymore when Sonny became a big TV mogul during the run of this show. So it’s kind of sad skit in hindsight. 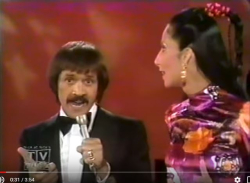 Cher wears a print dress and pony tail in a kind of ribbon tube. I love this 50s-throwback look. Sonny is in a black suit again. Nobody seemed to know how to dress Sonny at this time. He’s always in a black suit (which he looks good in but…).  They’ll do this medley two more times in the show’s run. I love this medley and it’s always been one of my favorite Concert segments. Cher sings it really well. Cher wears medallion earrings. She looks really young in this first rendition. Sonny really yells it out to the band at the bridge. I go between finding this charming and ridiculous. I also love the low shots with the big light flaring at the camera. This early set has hanging white balls in the background, not too fancy yet. In "Rip It Up" you can kind of hear how Cher melds her voice with Sonny in a kind of grittier singing style.

I Got You Babe: Sonny runs through their thank yous and then talks about the bracelets Sonny & Cher are wearing for the Prisoners of War in Vietnam. Sonny says many “show biz people” are wearing them. A sobering reminder the war was still going on at this time.

Highlights: This episode has one of the best opening segments. Sonny & Cher are having a good time. The big band tribute is a thing of wonder and this is their first rendition of Sonny & Cher doing “Stagger Lee/Rip It Up.”